Jane Austen’s books have seen plenty of remakes over the years. From film adaptations to sequels, her fans never get tired of her characters and stories. Fortunately for me, sometimes those spinoffs combine with my favorite genres to create the ultimate mashup—Jane Austen genre fiction! We all know about Pride and Prejudice and Zombies, Death Comes to Pemberley, and Bridget Jones’s Diary. I’m here to tell you about four lesser-known stories (based on my extremely scientific analysis of number of Amazon and Goodreads reviews and my prior knowledge). 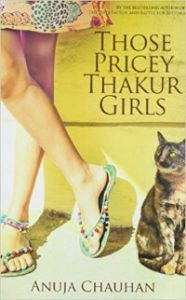 Five sisters, a sassy and opinionated heroine, and a love interest with a reputation and a strong sense of justice? That’s right, what we have here is a Pride and Prejudice–inspired rom-com set in 1980s Delhi. Now I guess you could argue that any Austen retelling could count as romance, but that’s beside the point. This book is a fun read with unexpected one-liners and a cast of entertaining side characters. It also has enough nods to Austen to be familiar without feeling like a scene-for-scene remake, which in this case was a plus for me. 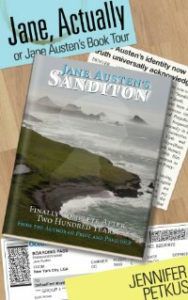 A new technology called the AfterNet lets dead people (now called the “disembodied”) communicate with the living via text. What does that mean for Jane Austen? An agent, a publishing deal, and a book tour using actress Mary Crawford (hello, Mansfield Park) as her physical form. You know, for the pictures and the autographs. It also means a chance at love for Jane and another member of the AfterNet. To be honest, I haven’t actually read this one yet, but it’s an interesting premise and definitely on the list. Petkus also wrote the Sherlock Holmes– and Jane Austen–inspired mashup My Particular Friend, which leads us nicely into our next category of genre fiction… 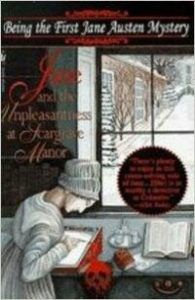 Jane and the Unpleasantness at Scargrave Manor by Stephanie Barron

If you came here hoping for a bit of Regency-style writing, you’re in luck! This mystery series stars Jane herself as an amateur sleuth, and the books are written as if they were her rediscovered letters and diary entries. The first novel finds Jane visiting her recently married friend Lady Scargrave, and then investigating on her behalf after Lord Scargrave’s untimely death. I felt like it started a little slowly, but I’m fond of lady detectives and period mysteries. After a few chapters the wit and the idea of Jane as a detective won me over. 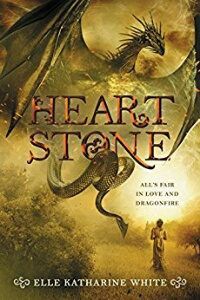 In my totally unprejudiced and not at all biased opinion, I saved the best for last. I love fantasy, and if I hadn’t randomly picked up this dragon-themed version of Pride and Prejudice at the library I would never have thought to look for Jane Austen genre fiction. Aliza Bentaine lives in a world with gryphons, banshees, hilariously irreverent hobgoblins, and yes, dragons. Soon after losing a sister to a gryphon attack, a team of dragon riders comes to eradicate the horde and protect the town. Unfortunately, among them is the handsome and arrogant Alistair Daired. Aliza is witty and brave, and she has plenty of opportunity for badassery throughout the book. Many parts of this story are close to the original, but I was intrigued by the re-characterization of some of the less likable characters. Someone PLEASE read this and talk to me about it, because I’ve recommended it to my sister twice and she just won’t.

So there you have it! Four examples of Jane Austen genre fiction for your reading pleasure. Do you have any other (especially non–Pride and Prejudice) recommendations? Let me know in the comments!