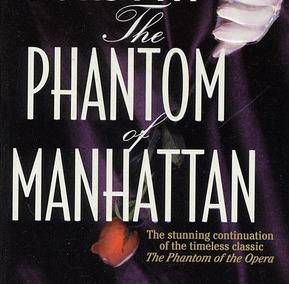 When it was announced that Andrew Lloyd Webber’s most recent adventure, Love Never Dies, might be going on a national US tour, I went back to revisit a book that’s been sitting on my shelf for about half my life, since I bought it in high school. This book was one that I’d been intrigued by since reading the original Gaston Leroux classic, which I’d consumed when the only adaptation of Le Fantome de l’Opera I could recall with perfect clarity was the one from Wishbone. Around the same time that I acquired The Bar Sinister and other self-published Pride and Prejudice continuations, I unearthed Frederick Forsyth’s The Phantom of Manhattan in a used book store. It was a crisp copy; it might not have even been read.

Looking at it now, I think I know why.

While I don’t recall exactly which ones, I have the distinct recollection of reading a few Frederick Forsyth novels as a tween. The Phantom of Manhattan is a bit of a step away from his usual fare, and on the surface looks like something I would totally enjoy. I have an enormous place in my heart for novels that play with the classics in any way; see Wide Sargasso Sea, or Rebecca’s Tale. But the thing about The Phantom of Manhattan is that it’s not a take on Gaston Leroux’s Erik. Instead, it’s a take on, well, Michael Crawford.

That’s right. Frederick Forsyth says in the preface that his novel is truly a sequel to Andrew Lloyd Webber’s Phantom. Because Frederick Forsyth says (and this is me taking out the more ridiculous part of his declaration) that the characters created through the musical are the ones that spoke to him and made sense to write. He and Webber even got together in the early nineties and collaborated on the bones of a story…which he built into The Phantom of Manhattan and Webber eventually developed into Love Never Dies.

And this is not the only time in which adaptations have made a significant impact on various forms of pastiche.

In the late 1990s and early 2000s, several websites created solely for Pride and Prejudice fanfiction sprung into being. They featured hundreds (thousands?) of renditions of one Fitzwilliam Darcy, all of whom were tall and rigid with dark hair and eyes and a half smirk. Bridget Jones: The Edge of Reason, the second novel in what is now a trilogy, includes a full scene in which Bridget and her friends watch and rewatch Mr. Darcy diving into the lake, highlighting it as a favorite aspect of the story (regardless of the fact that Jane Austen would never write her romantic hero doing something so undignified as undressing in the outdoors and diving into a lake–we all love to watch him emerge, though). Until his recent successes playing various Harrys and Georges, Colin Firth himself was often considered solely as one of two Darcy men: Mister or Mark. At the start of this, of course, is the 1995 BBC/A&E mini-series, which launched a community of viewers, readers and writers who would take the self- and traditional publishing industry by storm in the decades to follow.

And then we have things like A Very Potter Musical (which is amazing, by the way) and its spawn. Sure, there are parts you’d only understand if you were familiar with the books and the apocryphal lore (I’d bet if you’re a fan you also got into the House you wanted on Pottermore). But what they’re really based on are the films.

I would never, in a million years, say that spawning more media from media based upon media is a bad thing. That, after all, is why we have The Mortal Instruments and Dorothy Must Die and Carmen: A Hip Hopera. They also draw more people to the adaptation they might have been based upon, which in turn draws people to the original source material.

I’m just saying…when this is more like the original Phantom of the Opera than Frederick Forsyth’s novel…you gotta wonder about people’s choices.

Note: The Author remembers there was mist, and in the mist there was a man…whose name was spelled with two Bs. A thousand apologies to Lord Lloyd-Webber.