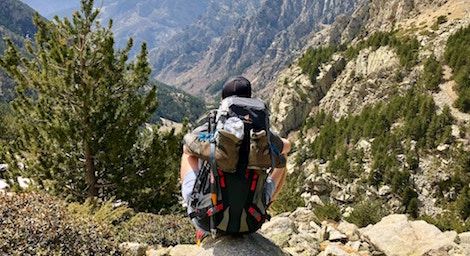 For their assignment this semester, I assigned my beginning composition students Walking Across America: Advice for a Young Man, a podcast that came out in 2013 by Andrew Forsthoefel. I was looking for something beautiful, something that could bridge the ever-growing culture gap between me and them, and something that would set the tone for the rest of the semester. One of the many things I wish I could whisper to my students was to never lose their sense of wonder, because wonder is sometimes all we have.

The last year, I had taught something punchy by one of my favorite writers, and all five sections I taught it to hated it. I knew I had to teach something less preachy, something written about a time in life where everything is in flux.

Thus, Walking Across America popped in to my head after 5 long dusty years. It was one of those pieces of art that while I hadn’t re-listened to it, it often floated to the surface when I didn’t expect it.

The podcast tells the story of Andrew Forsthoefel, who, in an effort to undo the existential state of WTF that plagues most of us between 20 and 30, walks solo from Pennsylvania to Louisiana and then on to California. Strapped to his backpack is a sign that says “Walking to Listen.”

As I listened again a few days before my classes started, I was transported to the first time I had encountered it. I was sitting in my old Subaru, on Nantucket Island, early in the summer of 2013. I was 24. I had just left a farm in Colorado I loved. I was lonely and broke. I was also scarred by both the recession that had brought my generation to its knees, and by a tattered relationship that I am only now able to understand. My bones were also weary from working three jobs.

My students enjoyed Walking Across America. Several loved the way the sounds 0f the desert transported them into the madness of it all; others were impressed about how many people took him in and took care of him and how listening seemed to be an act of honor. No one said a thing about feeling scolded, or preached to, or even that I, crazy Ms. G, seemed to be trying too hard. 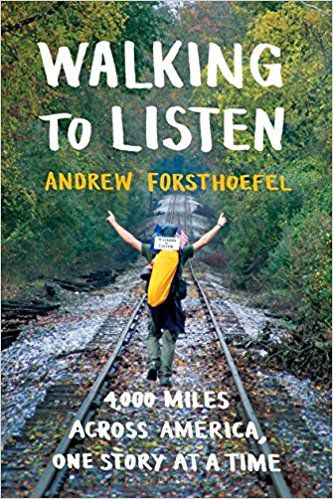 During my preparation for the class that day, I also found that Andrew Forsthoefel had written a book about the walk called Walking to Listen. I thought the book deserved a read, so I gave it a shot. In it, Forsethoefel interweaves his own past and his sometimes overwhelming obsession with death into his walking narrative and interviews. The people along his path include everyone from former President George W. Bush to a homeless preacher who comes in to a shelter late at night and then leaves again before dawn like a ghost.

The book also addresses the patchwork of America. Foresethoefel understands that his whiteness and his maleness make him safer out there on the road alone. He is faced with both the ugliness and generosity of Americans. Walking to Listen shows how diversity and inclusion and racism and fear are a part of the fabric of our country. There are times that I wish the podcast had included a little more of that, so that my students could have seen it more, too. But perhaps the wonder of it all was bit more important. Perhaps wonder is the only salve both me as a teacher and Andrew Foresthoefel as a writer can actually  offer.