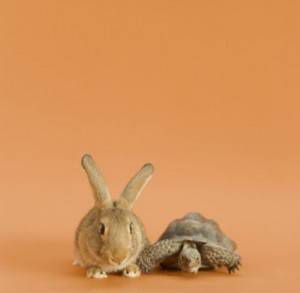 This is a guest post by Rachel Cordasco. Rachel has a Ph.D in literary studies (which means she’s read WAY TOO MANY books over the years) and has taught American literature and composition. She has also worked as an editorial assistant at the Wisconsin Historical Society Press. Keep up with her in the Facebook group for And the Moral of the Story Is…

2. Anything by Stephen Crane: It doesn’t matter what you do- the Universe still thinks you’re super lame.

3. Don Quixote by Miguel de Cervantes: You can never read too many novels…oh wait, maybe you can…

5. Moby-Dick by Herman Melville: When a big ol’ whale pisses you off by gnawing on your leg like it’s a chicken bone, go to physical therapy and seek emotional support from friends and family, rather than dragging lots of other people with you on a suicide mission to mess up that dang whale.

6. The Magic Mountain by Thomas Mann: Treat every out-of-town visit like a permanent move, cause you never know if you’ll wind up staying there, like, 10 years or something.

7. Sister Carrie by Theodore Dreiser: Cluelessness is not something you want to broadcast when you’re a young woman in strange new city, for you’ll just become a skeevy-guy magnet.

9. Frankenstein by Mary Shelley: If you absolutely must create a freakish monster thing, be sure to make a girlfriend for it, cause if you don’t, he’ll be really, really mad.

10. The Blithedale Romance by Nathaniel Hawthorne: It’s called a “utopia” for a reason, geniuses.

11. The Metamorphosis by Franz Kafka: Sucks to be a bug.

12. Macbeth by William Shakespeare: You should treat your guests well by, you know, not murdering them in their beds.

13. Huckleberry Finn by Mark Twain: When you travel around in a boat with a friend, away from human civilization, when you do run in to people you realize just how crazy they all are.

15. An American Tragedy by Theodore Dreiser: When you start going out with two chickies at the same time, it gets really complicated.

16. Madame Bovary by Gustave Flaubert: You can’t always get what you want, but that’s no reason to poison yourself and die a horribly slow and painful death.

17. Heart of Darkness by Joseph Conrad: Don’t frighten the natives.

18. The War of the Worlds by H. G. Wells: When the freaky alien things come swooping down on Earth and shooting lasers or whatever at everyone, run as fast as you can cause those aliens are mean.

20. Tess of the D’Urbervilles by Thomas Hardy: Just when you thought that life couldn’t get any more unfair, you read Tess and lost any last shred of hope.

21. “Ulysses” by Alfred, Lord Tennyson: Strive to live a life that’s so awesome that, on your deathbed, you can say to your friends, “we had some really great times, huh guys?”

22. Finnegans Wake by James Joyce: A book that ends at its beginning and begins at its end is inviting you not to read it, and you should accept that invitation.

23. Crime and Punishment by Fyodor Dostoyevsky: Crime, really, doesn’t pay- it just makes you turn your soul inside out and beat it with a stick, that is, if you’re an angst-ridden, depressed, 19th-century Russian guy.

24. The Age of Innocence by Edith Wharton: Society cramps your style, but it’s so damn convenient when it accepts you.

25. Odyssey by Homer: Go through life looking straight ahead and ignoring all those bothersome people who try to get all up in your face and make their business your business- you know, like those kiosk people at the mall who accost you and spray you with some new perfume or whatever.

26. Buddenbrooks by Thomas Mann: Look, you can’t be awesome forever.

27. Remembrance of Things Past by Marcel Proust: Better not eat that corn chip- otherwise, you’ll be mentally transported back to that time when you were 9 years old and you went to that camp that you liked but stupid Andy whatever-his- last-name-was was there too and he ripped that bag of corn chips right out of your hand and you had just bought it with the last 50 cents you had left but you were too scared to tell the counselor cause Andy would have beaten you up. So yeah, ixnay on the cornchip-ay, monsieur.

30. Fight Club by Chuck Palahniuk: Don’t beat yourself up about it.