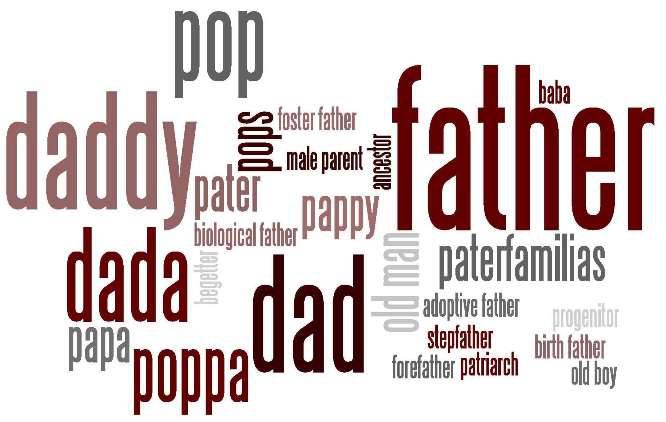 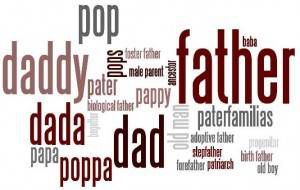 About a month ago, in honor of Mother’s Day (and the mothers it honors), I pointed out just how much we owe to mother—more specifically, how much we English-speakers owe to “mother.” Today, of course, attention turns to dad, daddy, pop, pops, papa, or poppa (which are only some of the more than a dozen common names for the male parent recognized in Oxford Dictionaries Online). So it’s only fair to give Dada his due by having a little Father’s Day fun with etymology.

Beyond the obvious familiar phrases—Godfather, Father Christmas, Father Time, Sugar Daddy, Daddy-O, and daddy longlegs, among others—here are a few words that, you might say, were originally fathered by “father,” but now bear only a passing resemblance to their old man:

Perpetrate
Originating in the mid-15th century, from the Latin perpetratus, it combines per- (“completely”) with patrare (“carry out,” or “bring into existence”). Patrare, of course, derived from pater—“father.” The original word itself has a neutral connotation (in Latin), but since it first appeared in English in legal statutes, it took on the sense of “to perform criminally.” So the next time you hear a news report about police on the look out for a “perp,” just remember—that could be your dad out there.

Okay, this may be a more obvious one, now that you’re clued in to the whole pater root. Combined with Greek and Latin forms of -ios and -otes, signifying “of one’s” and “state or condition,” you get a word that means “loyal supporter of the land of one’s fathers” (i.e., one’s country). By mid-18th-century England, “patriot” had become a term of derision for someone whose zealous love of country could make him “a factious disturber of the government” (according to Samuel Johnson). Hmmm. Interesting. In current American parlance, of course, it is primarily used to describe phenomena such as i) a successful film about the American Revolution by Mel Gibson before he went batshit insane; ii) an act of Congress that aimed to undermine Al Qaeda by exposing private citizens’ library records; and, of course, iii) a professional New England football team known for winning Super Bowls that do not involve the New York Giants.

With its first use dating back seven centuries in the context of saints, this pater-based word has evolved from “defender” and “protector” to primarily be used as “one who advances the cause,” generally of a certain institution or artist. By the 17th century, “patron” also referred to anyone who could be considered a “regular customer.” And, of course, simply add an acute accent over the “o,” and it becomes a well-regarded brand of tequila. Daddy loves tequila!

Author
Wait—what? Hey, this shouldn’t be a surprise to anyone who has felt the tender love (and sometimes almost-unbearable frustration) of parenthood for something they have written. But before its usage as “one who sets forth written statements,” it derived from autor, c. 1300, from the Old French auctor, acteor, meaning “originator, creator, instigator, founder, master, literally one who causes to grow,” and in some cases, “father.”