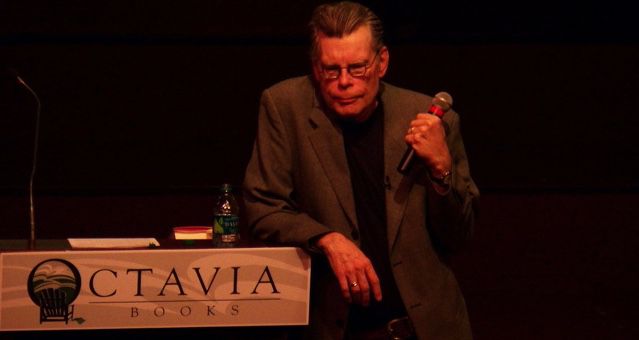 On a recent Tuesday morning, I woke up to find that you had tweeted about the ongoing discussion about the lack of diversity in the Oscar nominations, saying “I would never consider diversity in matters of art. Only quality. It seems to me that to do otherwise would be wrong.”

…I would never consider diversity in matters of art. Only quality. It seems to me that to do otherwise would be wrong.

I have long admired your work and your straightforward perspective on writing. I’ve been lugging your giant books around since I was in high school, and I have nearly all of your books proudly displayed on my bedroom wall. When he was planning to propose, my now-husband tracked down a signed hardcover copy of It across state lines because he knew how meaningful it would be for me to have my favorite book signed by my favorite author. You’ve been a very significant part of my reading for over half my life.

So when I read your tweet that Tuesday morning, I was extremely disappointed. Perhaps not surprised, as I am increasingly less surprised at the ability of white men to look beyond themselves, but disappointed all the same because I know you are capable of better.

Let’s look at the Oscars situation, because once again the Academy nominated almost exclusively white people, and most of them were white men.

No women were nominated for Best Director. Cynthia Erivo was the only person of color nominated across 20 acting categories, and there’s been a lot of time spent talking about the problematic issues with the movie Harriet, not to mention the fact that the only person of color was nominated for their performance in yet another movie about slavery. Meanwhile, Joker received 11 nominations—perhaps one of the most quintessential disaffected white male movies of the last decade.

You said that you only consider the quality of the art when selecting your nominees. I imagine that many of the other members of the Academy feel the same way. So if everyone is only judging based on the quality of the art (and even that’s not a fair assumption, based on these comments from anonymous Academy members over the years), then how is it that we consistently end up with these whitewashed nominee lists? Maybe it’s because the people who are in positions of power believe that “quality” and “diversity” are mutually exclusive, and that quality is synonymous with “white men.”

And don’t forget that women and artists of color have had to struggle much, much harder to even make their art visible before a wider audience. These artists have never received the same promotion, attention, or accolades as the art of privileged white men (such as yourself), and yet you don’t seem to think that this should factor into your decision-making process.

Shortly after your initial tweet, you changed course with another tweet that read “The most important thing we can do as artists and creative people is make sure everyone has the same fair shot, regardless of sex, color, or orientation. Right now, such people are badly under-represented, and not only in the arts.” Which, yeah, is an accurate statement, but this had the feel of damage control rather than sincere belief.

So let’s take your statement of diversity vs. quality and move into the world of books. You’ve long been a proponent of reading widely, and have curated not one but two lengthy lists of recommended books at the end of each edition of On Writing. You have judged the quality of these books and found them very high, so let’s look at some of the overall numbers.

Between the two lists, you compiled 178 different titles. The first list was compiled in 2000 and has 96 books, 74 of which were written by men. That’s 77% of the list. Out of the 22 books listed by women writers, two of them were written by your wife. (I don’t begrudge you for supporting your wife’s writing, but we have to factor that into the overall point I’m trying to make here.) In fact, if we look at the number of times a female author was featured more than once on the list, we’re down to 19 individual female authors (one of whom, again, is your wife). One book was written by a male author of color, and one book was written by a female author of color. That accounts for a measly 2% of the entire list when you combine the two entries.

So let’s look at your list from 2010. That list had an additional 82 books. 68 of those books were written by men, accounting for 83% percent of the entire list. You featured twice as many books written by authors of color (up from two books to four), but none of them were written by women of color. 13 of the authors were previously mentioned on the first list.

Looking at these lists, I would have to say that your initial statement was true: You don’t consider diversity when determining quality. Yes, we are all free to read whatever we want, but we can’t pretend that we are neutral judges when comes to deciding what’s “good.” We are all in charge of the choices we make, and just because some of these choices may be made on a subconscious level doesn’t mean you’re excused from responsibility for those choices. I hope that this backlash will cause you to take a step back and look at the media you consume and promote, because your opinion holds a lot of weight in the media and in pop culture.

If you claim that we should all make a point to read widely, set a better example with yourself. Read more books by women. Read a lot more books by authors of color. Step outside of your bubble and discover the true power of story when it’s told by people unlike yourself.

I hope you do some deep thinking and improve on this. In fact, if I believed as a fan that you were incapable of doing this, I would have written you off and focused my attention elsewhere. But I believe you can make meaningful changes to how you view the world. It’s just up to you to do so.

From a Constant Reader,

P.S. This is an issue I raised in a previous article about books you’ve recommended in the past, and I included a few reading suggestions at the end by authors of color that you might enjoy. Perhaps you can use that as a starting point.

P.P.S. If you’re still not convinced that this is as widespread a problem as a lot of people say, perhaps you might appreciate some of these other articles we’ve written for Book Riot.