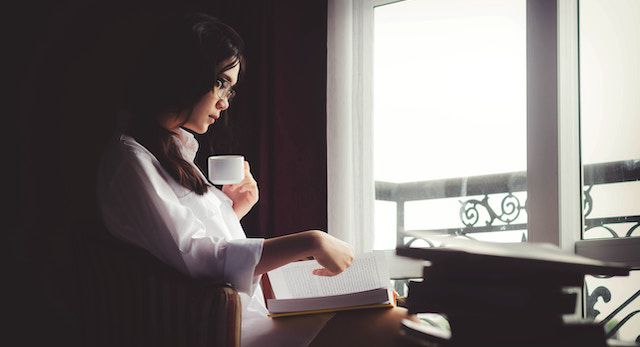 “If we see the world as one long brutal game, then we bump into another mystery, the mystery of beauty, of light, the canary that sings on the skull…unless all ages and all races of man have been deluded…there seems to be such a thing as grace, such a thing as beauty, such a thing as harmony.” (48) 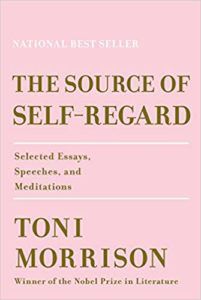 Though much of the writing published in Toni Morrison’s most recent collection of nonfiction, The Source of Self-Regard, was first published (or given as a speech) elsewhere, over the last 40 years, her collection of essays, literary criticism, and speeches speak to our present moment with precision and force. In 2019, a year of crisis within the United States, when artists and writers of all sorts have been questioning the place of art in times of darkness, Morrison so clearly articulates its value.

The essays in this collection were taken from Morrison’s personal archive, from her eulogy for James Baldwin, from her commencement addresses, speeches and published essays. Some points will be familiar to Morrison fans, but much of the book will be new, even in the pieces written in the 1970s. In combination, the force of Morrison’s nonfiction becomes clear: her analysis of race, of literary criticism, of academia, of home, memory, violence, loss, and pain. Morrison’s nonfiction is not simply relevant because nothing has changed in the last 40 years, but because Morrison can so powerfully cut beyond the facade and speak to her experience, to America, to academia, to pain.

In this collection, like in her fiction, an argument takes shape: an argument for the role of the artist, the writer, the critic as an integral part of democracy, of a striving to end white supremacy. In her first section, Morrison writes “How bleak, how unlivable, insufferable existence becomes when we are deprived of artwork.” (vii) This is the argument that takes shape: not a narrative of liberalism and artistry rising above oppression triumphantly, but one of artwork as the work, the work necessary for life and death no matter how violent the world is. In their book The Undercommons, Fred Moten and Stefano Harney write, on academia and the university, “She disappears into the underground, the downlow lowdown maroon community of the university, into the undercommons of enlightenment, where the work gets done, where the work gets subverted, where the revolution is still black, still strong. What is that work and what is its social capacity for both reproducing the university and producing fugitivity?” (26). This fugitivity is the space embodied by Morrison here.

Morrison’s collection makes clear that what many have seen as a retrenchment of rights since the election of Donald Trump is in actuality a continuation of the white supremacy that is part and parcel to our education system, our literary heritage, our history of art museums and public spaces. That so-called spaces of democratic liberalism have been constructed by the very ideas—ideas of white supremacy, violence, and hate—that have been given more space since the 2016 election. But she doesn’t speak in bleak metaphors, but rather bluntly points out the dangers of racism, of fascism, of violence. She writes “Let us be reminded that before there is a final solution, there must be a first solution, a second one, even a third. The move toward a final solution is not a jump. It takes one step, then another.” (14) Though this essay was first written decades ago, it could just as easily been a reference to the shooting at a Synagogue in Pittsburgh, of the separation of children from their families at the border, of the shootings in Parkland, Charleston—the shootings now happening almost every day.

Read this book if you need to be inspired to be a better artist, a better critic, a better writer, a better person. If you have lost sight of the work, the hard work, the work it takes to survive and create America every day. Read it if you need to see a master throw shade at Ernest Hemingway, among other literary “greats.” Read it if you want to see a master of language eulogize James Baldwin, a writer who has been resurrected in the last half decade by activists, scholars, writers, and those lost, looking for a guide post, for their writing, for their living. “I am a writer and my faith in the world of art is intense but not irrational or naive. Art invites us to take the journey beyond price, beyond costs into bearing witness to the world as it is and as it should be.” (53)