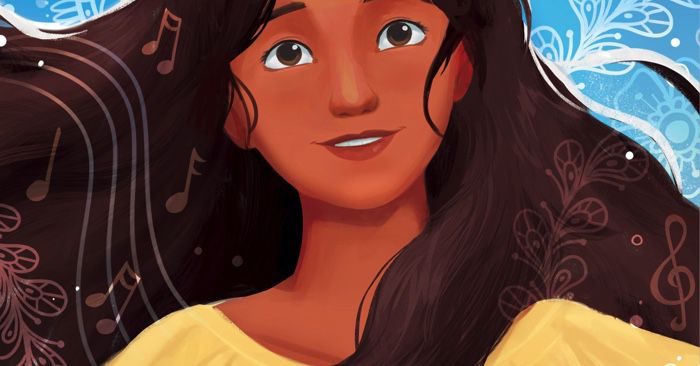 Fans of Amina’s Voice, look out for the next book in this wonderful middle grade series! Take a look at the cover for Amina’s Song by Hena Khan, out March 2021. Check out the synopsis below, and keep scrolling for an excerpt from the book:

It’s the last few days of her vacation in Pakistan, and Amina has loved every minute of it. The food, the shops, the time she’s spent with Thaya Jaan and cousin Zohra—all of it holds a special place in Amina’s heart. But the school year is starting again, and while she’s sad to leave, Amina’s excited to share how wonderful Pakistan is with her friends back home.

Once Amina is returns home, though, it seems like Soojin, Emily and Rabiya don’t want to hear about her trip. And when she decides to do a presentation on Pakistani hero Malala Yousafzai, her classmates only focus on the worst parts of the story. How can Amina share the beauty of Pakistan when no one wants to listen?

In this sequel to Amina’s Voice, Amina once again uses her voice to bridge the places, people, and communities she loves—this time across continents.

I raise my hand to go first, but Mr. Griffiths calls on Keira to present her research update to the class.

“I picked Harriet Tubman for my project,” she begins.

Imam Malik gave me the advice to go first when I’m speaking in public, so I have less time to get worked up about it. But since I wasn’t picked, I study my notes on Malala again and try to stay calm. I’m extra nervous, since this assignment is worth fifty points. Mr. Griffiths told us that he wants to make sure we’re making good progress with our research and that we discover any gaps before our big presentations, only four weeks from now.

“Harriet Tubman was an amazing person who led enslaved people to safety through what became known as the Underground Railroad. When she herself was safe, she returned several times to help others escape to the North,” Keira continues.

I watch how Keira makes sure to look up as she reads from her paper and takes deep breaths between sentences like an expert speaker and make a mental note to try to do that. When she finishes, Mr. Griffiths asks about her sources, and makes a few suggestions of other places she can check out. Keira seems pleased with herself when he says she’s off to a great start, and practically skips back to her seat.

I raise my hand again, but Mr. Griffiths calls on Justin next, who saunters up to the front of the room and crinkles the edges of his paper as he starts speaking. His voice is big and projects like he’s in a theatre, not a classroom.

“I picked Alexander Graham Bell, since he invented the phone. I’m a huge fan of my phone, and I wanted to learn all about the person who made this piece of technology possible. Plus, I get to do some of my research on my phone, which means my parents can’t get mad at me for being on . . . ‘a device’.”

Everyone laughs at Justin’s jokes, but it quickly becomes obvious that while he’s entertaining, he hasn’t actually done a whole lot of actual research yet.

“More specifics about his life and work, Justin,” Mr. Griffiths explains. “Remember, you will eventually need to be prepared well enough to not only speak as if you are Alexander Graham Bell, but to be able to answer questions about him, too.”

As Justin heads back to his seat, slapping hands with one of his friends on the way, Mr. Griffiths takes a moment to talk about appropriate online research and warns us that relying on Wikipedia will earn us a failing grade.

I raise my hand halfway the third time around, and this time Mr. Griffiths calls on me.

I take a deep breath, ignoring the trembling in my legs, and walk to the front of the glass. Fighting the desire to run away, I search for a friendly face to focus on, clear my throat, and start to speak.

“Malala Yousefzai fights for education. She’s from Pakistan, which is where my family is originally from. Malala loved going to school and wanted to be a doctor one day.”

My hands are shaking a little, but I hope no one can tell.

“After a while Malala was told that she and other girls couldn’t go to school anymore by a group of people who were part of the Taliban. They came into her village and started changing the rules and did things like forcing women to stay inside and banning movies.”

Mr. Griffiths is taking notes, which I hope means something positive. Half the class appears to be listening to me, but a few are doodling or staring out the window, and one kid has his eyes closed. I think he might be asleep.

“Malala didn’t want to stop learning, and she spoke up about her right to get an education. She kept going to school after she was threatened, and her father was supportive of her. When she was fifteen Malala was shot in the head by the Taliban while she was riding the school bus.”

As I say the last line, the energy in the room changes. Suddenly everyone is paying attention. My nerves threaten to return, but Mr. Griffiths nods his head when I glance at him, as if to say, “Go on.” I exhale and continue, trying to remember to speak slowly.

“She had to be flown to England and have a bunch of operations, but she miraculously survived and recovered,” I continue.

“And even though she was almost killed, she refused to stop speaking up for the rights of all girls to be educated. She won a Nobel Peace Prize when she was only sixteen, and she’s the youngest person to ever get that honor. Malala’s working on a bunch of programs to help girls and fight for their right to an education and she travels around the world inspiring people with her story and her bravery.”

I rush through the end because I want to return to my seat until Mr. Griffiths holds up a hand to stop me.

“Just a moment.” Mr. Griffiths clears his throat. “What sources are you using, Amina?”

“A few books I checked out and some articles.”

“Have you read the autobiography I Am Malala?” Mr. Griffiths asks.

“If we don’t have it at our library, I’m certain it’s at the Greendale Public Library. It’s always helpful to have firsthand accounts if possible. Remember, class, getting information from a variety of reliable sources, primary, secondary, help us to get the full picture. But, nice job.”

As I head back to my seat my insides start to unwind. I managed to get through speaking for three whole minutes in front of an audience, which I think is the longest ever, and Mr. Griffiths thinks I’m doing okay so far.

“Oh my gosh. That is so terrible, what happened to Malala,” a girl named Sheila says to me as I sit back down. “I can’t believe anyone could do something like that.”

“It makes me so sad that all those girls in Pakistan don’t have rights like we do,” Sheila adds, pushing out her lower lip for emphasis, and I stop nodding.

“Yeah, we’re so lucky we don’t live there,” the girl sitting next to her declares, and then Sheila adds, “can you imagine?” with a dramatic sigh. A few others murmur their agreement.

Shame creeps up from the back of my neck into my face as Sheila’s eyes bore into me, as she waits for me to say something. It’s as if she expects me to comfort her, or maybe she wants me to agree with her. But no words find their way to my tongue, which is frozen like I feared it would be earlier. And any confidence I had when I walked back to my seat oozes out of me.

I desperately search for Mr. Griffiths, with the hope that he’ll jump in and say what I’m unable to. Something like girls in Pakistan do have rights—it’s the Taliban that tried to take them away. Or maybe that there are millions of other girls in Pakistan whose experiences aren’t anything like Malala’s. Girls like Zohra and my other cousins who are safe and comfortable and living perfectly ordinary lives.

But Mr. Griffiths is talking to a kid on the other side of the room and looking at something in his binder and he didn’t hear her.

What am I supposed to say?

Before I say anything, Mr. Griffiths asks who wants to go next and Sheila waves her hand around and then pops out of her seat. She doesn’t look sad anymore as she walks to the front of the room, and with a toss of her hair, delivers an energetic presentation about Amelia Earhart.

“Amelia Earhart taught us that, for men and women alike, the sky is the limit!” she squeals like a cheerleader at the end. She beams, and then, after glancing in my direction, adds dramatically, “At least in America.”

My heart sinks and is a rock sitting in my stomach for the rest of the day.