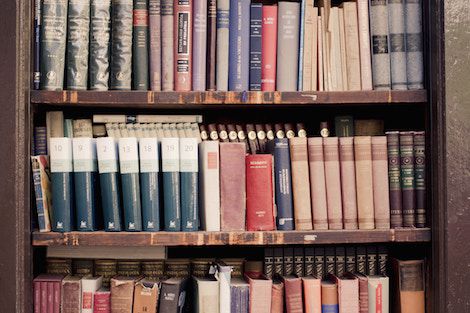 Robert Kennedy once said, “The United States was born in revolution and nurtured by struggle. Throughout our history, the American people have befriended and supported all those who seek independence and a better way of life.” Whether you think that quote to be true or not is up to you, but I can say for certain that the history of the United States is interesting in that it is embedded in revolution, racism, struggle, war, slavery, controversy, conspiracy, and much more. But have you ever considered which historians tell our history? Historians are the gatekeepers of our nation’s history and the amount of time they spend conducting exhaustive research sometimes goes unnoticed. From experience (my two undergrad degrees are in history), I can tell you just how hard it is working on a forty page final paper. When I see the body of work of some of my favorite historians, I am astounded with the amount of work that goes into just one of their books.

I want to make it clear that I am not claiming to be the preeminent voice on historians; rather, I am hoping to shed light on some of our country’s greatest historians and some of their greatest books. But I will say that Bill O’Reilly’s books are garbage. He is not a real historian but manages to put out “historical” books. Don’t ever read them. So here are some great American history books by some of our greatest historians.

A People’s History of the United States by Howard Zinn 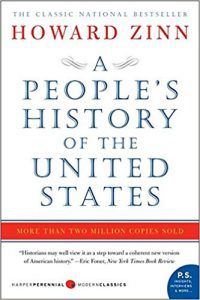 “You wanna read a real history book? Read Howard Zinn’s A People’s History of the United States. That book’ll  knock you on your ass.” That’s Matt Damon in Good Will Hunting. In history there is a saying: “To the victor go the spoils.” So history is usually written by victors of conflicts and by the upper class while almost always ignoring history as seen by the “losers” and lower class. Zinn, a historian, author, professor, playwright, and social activist, has done something amazing with this one. He tells the history of our nation from the perspective of those who have been historically marginalized. Slaves, Native Americans, and the lower class, those whose voices have almost always been silenced, saw history from a different perspective. Where history usually tells the story of the master and plantation owner, Zinn tells the story of the slave. Where history omits or briefly mentions the extermination and removal of Native Americans, Zinn tells the story of the Native Americans. This book is such a spectacular read, it is no wonder there are more than two million copies in print. I recommend this one for anybody who wishes to know more about our nation’s history. 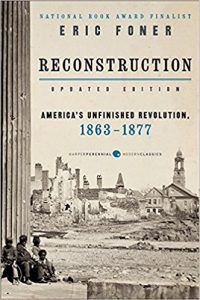 Eric Foner, DeWitt Clinton Professor Emeritus of History, is the preeminent historian of Reconstruction. It is safe to say nobody knows more about reconstruction than him. The Reconstruction Era was the period from 1863 – 1877, a period of rebuilding after the destructive Civil War. This book earned Foner the Bancroft Prize, an award given annually by Columbia University to the authors of distinguished works in either or both of the following categories: American History (including biography) and Diplomacy. This book is a great read. It details the ways in which Black and White Americans responded to the end of the Civil War and slavery. Have you ever wondered where the phrase “forty acres and a mule” came from? It was echoed throughout the South during the period of Reconstruction. According to the Boston Globe “This smart book of enormous strengths remains the standard work on the wrenching post-Civil War period—an era whose legacy still reverberates in the United States today.” I read this book in college and fell in love with it immediately. If you have ever wondered how the nation was rebuilt or wondered about race relations and racial attitudes after the Civil War, I suggest you start with this book. You will not need another book on the subject.

Runaway Slaves: Rebels on the Plantation by John Hope Franklin 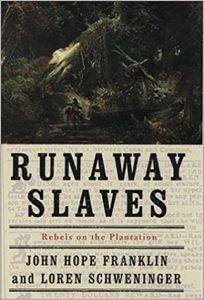 John Hope Franklin, who was America’s foremost African America Historian, put together this groundbreaking analysis of slave resistance and escape. Franklin was former president of Phi Beta Kappa, the Organization of American Historians, the American Historical Association, and the Southern Historical Association. No other historian knew more about slave resistance than Franklin. Runaway Slaves tells the incredible stories of slaves who frequently rebelled against their masters before the Civil War. From Stono Rebellion in 1739 to Nat Turner’s Rebellion in 1831, this book demonstrates that, contrary to popular belief, significant numbers of slaves did in fact frequently rebel against their masters and struggled to attain their freedom. Slaves did not submit to their masters and accept their lives as that of human chattel. Equally important, this book examines how the white slave-holding class reacted to their slave’s resistance. This read is breathtaking and a must read. I highly recommend it. 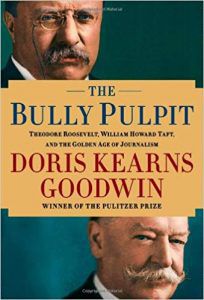 Doris Kearns Goodwin is an amazing biographer, historian and the winner of the Pulitzer Prize for History in 1995. Goodwin has written biographies of several U.S. presidents, including Lyndon Johnson and the American Dream; The Fitzgeralds and the Kennedys: An American Saga; and Team of Rivals: The Political Genius of Abraham Lincoln.  The Bully Pulpit is a dynamic history of the first decade of the Progressive era, that tumultuous time when the nation was coming unseamed and reform was in the air. The muckraking press really came to live in this era as they shed light and revealed to the nation facts about corrupt politicians, robber barons, and corporate exploitation. What separates this American history book from many others is that Goodwin relies heavily on primary sources. From direct correspondence between Roosevelt and Taft to the diaries of their wives, Goodwin’s scholarship is unparalleled. This book is a captivating read that will not disappoint. I highly recommend this one.

I hope you enjoy these recommendations. Never forget that to truly know who we are as a nation, we have to fully understand where we have been as a nation. Too many people these days take our history for granted and don’t do enough to educate themselves on important, history-changing events that have shaped our entire nation’s history. Don’t be that kind of person. Read!