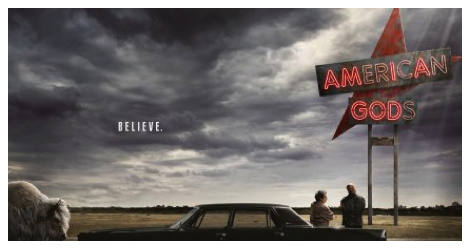 I met Neil Gaiman last week. I had a chance to ask him questions about one of my favorite books, its impending TV debut, and storytelling. He was lovely and gracious and he reminded me of the importance of the secret lives of literary characters.

It was sort of a thing for me. Okay, fine. It was huge.

I’ve read Gaiman’s novel, American Gods, at least once a year since it was first published in 2001. I am definitely, as they say, a “fangirl.” I’m currently working my way through the book in Spanish (an effort to brush up on the language and also because it feels very… American to read a novel written in English by a British author, who emigrated to the States, in translation).

I was nervous as hell about the event, not only because Gaiman is an authorial hero of mine, but because the roundtable for the STARZ adaptation of American Gods was my first “real” press event and not only was I a total newb; I felt like one. Gaiman, true to reputation, took the time to give thoughtful answers to everyone’s questions (including mine) and spent a while talking to the assembled media folks about how it felt to watch something he created take on a whole new life in a different medium “It’s always delightful,” he enthused and then went on to explain to us why working on American Gods was particularly special and why television was the best choice of format.

The novel was originally 200,000 words (very approximately 800 pages). The publisher asked Gaiman to cut 50,000 worlds for the first edition (the theatrical cut, if you will). The author preferred text, published in 2011 in celebration of the book’s 10th anniversary, contains 25,000 of the words culled from the original. Which leaves around 25,000 words (roughly 100, double spaced pages) floating around in the ether. At least some of those words are devoted to giving secondary, if central, characters such as  Laura Moon, Mad Sweeny, and Technical Boy histories and lives of their own apart from their interactions with Wednesday and Shadow. They clue the reader in to they are doing when they’re “off stage,” as it were, adding depth and breadth to the central and ancillary narratives.

Television, Gaiman explained, because if its serial format allowed him, and show runners/co-writers Bryan Fuller and Michael Green, to explore the seeds of those stories where a feature film would have been as limited as the first edition of the book. American Gods, he told us, could only ever really be a television program because it needed room to stretch, grown, and adapt. To integrate new versions of old adventures.

And no, I’m not telling you any more than that. Even if there wasn’t a strict spoiler policy in place I wouldn’t tell you. You deserve to experience American Gods in full, unadulterated, magical, weird glory.

The conversation got me thinking, however, about some of my other literary favorites, such as Kiva Lagos (The Collapsing Empire), Ichabod Drift (Dark Run and Dark Sky), Beverly Brook (Rivers of London), Falcio val Monde (Greatcoats), Hera Syndulla (Star Wars: A New Dawn), and a passel of others, about my attraction to them, and my attachment. Why was I so fascinated by these characters? Why do I always want more of them? What makes them special?

It’s a constellation of things, of course, but after speaking with Gaiman, I realized that a huge part of what makes those characters memorable and unique is the author’s deep understanding of who they are, including what they do when they’re not in the reader’s sights. I think, in the really good books, the ones we re-read, like American Gods, the authors must have at least the basics secreted away in obscurely named files or battered notebooks (what, I can’t be romantic about it?). As readers, we may never get eyes those outlines, snippets, and side rips but our reader brains know when they exist because the characters who have those extensive histories, even when we know nothing about said, are the ones who seem the most “human,” the most “real.” These are the folks for whom we wait, anxiously, until the next book in a series arrives, who we miss when they’re gone (series end or, you know, death), and who we’ll always welcome back. The characters we wish we’d created, who travel with us, live in our heads and in our hearts.

Both my reading and my writing were changed by the event last week and for that, I will be forever grateful. Now that I know what I’m looking at, I can better demarcate the parameters of what I’m looking for. I can be both more discerning and more targeted in my reading selections. As a writer, I know what I need to do to create characters who will (hopefully) do for others what Gaiman’s Shadow and Laura, Bilquis, Wednesday, and even Hugin and Munin have done for me (of course the doing of it is another matter entirely).

Also, in case I didn’t make it clear before? You should watch the show (April 30th on STARZ, May 1 on Amazon Prime outside of the US).