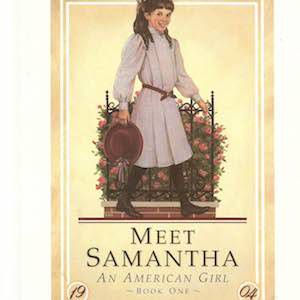 I’m a Samantha. No, not that Samantha, but American Girl Samantha Parkington, of Mount Bedford, New York.

That may surprise some readers, who might wonder how a nerdy Filipina girl feels kinship with a Victorian-era heiress. But the American Girl series was just that magical to me in the late 1990s, and an undeniable influence on the way I perceived personal history.

At the height of American Girl-dom, there were six dolls–six girls from different points in American history, each with their own set of books. The basic foundation of the individual series were the same: an introductory book, a “lesson” book, a Christmas story, a spring story, a summer adventure, and a winter-themed book about the inevitable changes as one grows up. It’s the time period that sets each girl apart, and impacts their experiences and perspectives.

I first found the American Girl books at my local library in Philadelphia. I wasn’t a teen, but I wasn’t a little kid either, and the Baby-sitters Clubs, while fascinating, were pretty intimidating to a shy girl with very few friends or neighborhood roots. Samantha was the first AG I stumbled upon on the shelves, her neat pinafore and hair bow appealing to my budding aesthetic. I was lucky that day. All six of her books were available to borrow, and I took them home that night, devouring them one right after the other.

History, to 10-year-old Angel, had been a very male-driven field. I knew there had been women like Amelia Earhart and Susan B. Anthony and Harriet Tubman (I told you, I was very, very nerdy at 10 years old), but I didn’t feel any connection to those women. In Samantha, I saw some of the personal struggles I had in my daily life. I read on, riveted, as she tried to earn and keep her grandmother’s respect, as she learned about the world around her, as she tried to define what being a “lady” meant. Her history made me think about my own, and the America I existed in.

Seeing particular milestones in Samantha’s life presented me with a lens through which I began to evaluate my own personal history. What was my important lesson? What were the moments of spring in my life–the points of growth and reflection–and what were the changes that had shaped me? Were there principles I believed in, and how did they become important to me?

The various gaps and intersections of my identity came to light as I continued reading through the rest of the American Girl series. Felicity Merriman discovering what loyalty means, and what actions it inspires during the Revolutionary War, helped me figure out that loyalty was something I valued in myself and the people around me. Josefina Montoya dealing with language and identity reminded me that my own discomfort with the Filipino culture wasn’t something I needed to be ashamed of, but to work towards understanding.

As I read through Kirsten Larson’s books, I identified with how she grappled against displacement and confusion in a new land as an immigrant kid. Addy Walker was my mirror, as her books focused on the importance of family and addressing casual racism/stereotyping. Molly McIntire taught me how to be resilient, and to deal with my natural stubborn attitude. All of these qualities are ones I’ve learned to adopt, haltingly, through several moves around the world, and experiences that I never really thought I’d have.

The American Girls and I didn’t exist at the same time–maybe we wouldn’t even have been friends if I lived in the 1700s or the early 20th century. I didn’t own any of the dolls myself. There was never a “main” American Girl who was Asian (Ivy Ling was released in 2007, but she was billed as Julie Albright’s best friend, and the doll was retired last year).

But there was a companionship that these books provided that I didn’t find in the Baby-sitters Club or in Sweet Valley High or any of the other female-centric series of the late ’90s/early 2000s. We lived in different time periods, but some of our concerns were the same. Some of the insecurities and worries transcended decades. Some of the joys stayed the same too. They made me feel like I, too, was an American Girl, worthy of a story.