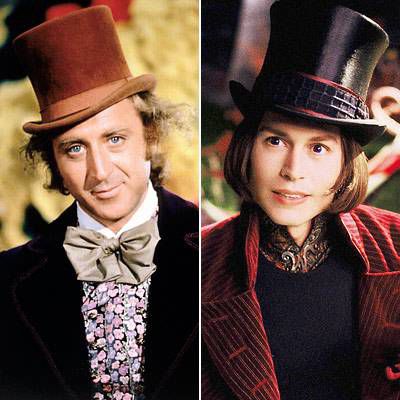 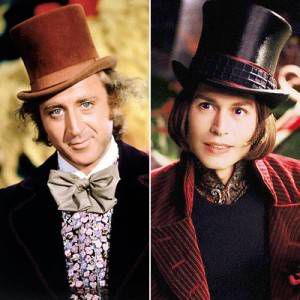 So I happened to catch Charlie and the Chocolate Factory on cable the other night—the 2005 Tim Burton/Johnny Depp version, which is creepy in a completely different way from the 1971 Willy Wonka and the Chocolate Factory* with Gene Wilder that gave me Oompa-Loompa nightmares as a kid. Watching it with an eye for language, there is so much to take in, and I’m not just talking about “Wangdoodles,” “Hornswogglers,” Snozzwangers,” “scrumdidilyumptious,” and other words drawn from pure imagination.

*Incidentally, author Roald Dahl disowned the first movie based on his novel—his heirs think he would have been slightly more comfortable with Burton’s darker, more “adult” vision.

As Charlie and his grandfather make their way into the chocolate factory, there is this exchange between the fathers of Veruca Salt and Mike Teevee, two of the ridiculously bratty children joining them on the Golden Ticket tour:

Mr. Teevee: Is it just me, or does Mr. Wonka seem a few quarters short of a buck?
Mr. Salt: I’m sorry, I don’t speak American.

It’s an old joke, a sentiment that’s been expressed time and time again. I believe it was Oscar Wilde who may have written, “the Americans and the British are identical in all respects except, of course, their language”—often since misquoted as “two nations divided by a common language”—or Homer Simpson, who said,* “English! Who needs that? I’m never going to England!”

*Yes, I do know that Homer Simpson did not come up with those words on his own any more than he animated himself. But then, it has also always been the lot of screenwriters and playwrights to watch actors get credit for the brilliant lines they write.

This dovetails nicely* with the well-researched revelations of the new book Speaking American: A History of English in the United States. Written by University of Michigan professor emeritus Richard Bailey (and alas, published posthumously this year, several months after his death), this survey, though somewhat academic, is a fun-to-read tale of how Americans have twisted and tweaked their inherited tongue into something rather unrecognizable to those who spoke it just centuries earlier.

*Nicely is generally how things dovetail. 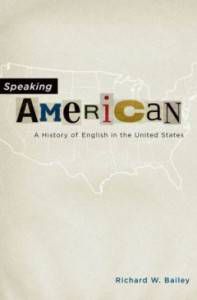 Bailey traces the evolution of American English by time and place, from the early Chesapeake Bay colonies to 20th-century California and on into 21st-century cyberspace. It’s not just a matter of new words that arrived with the expanding frontier, but the striking evolution of so-called proper dialects and diction—or, as it would have been casually pronounced in early 1800s Philadelphia, “discon.” At the heart of the matter is the fact that English, for all its rules, doesn’t really, ultimately have rules—especially in America.

Which is not to say we haven’t always been obsessed with those rules. Despite some of the passionate comments on my admiring repost last week of Grammar Girl’s thoughts on “irregardless,” we’ve apparently come a long way in terms of handling our linguistic issues: in the mid-18th century, Quakers who used the familiar thee when the formal ye was expected could be put to death for their transgression.

As Bailey writes, “…all the ways we now think of as ways of speaking will change beyond recognition.” (Author Michael Rosen went so far this week as to argue that “there’s no such thing as ‘correct grammar’”—and he’s British!) And Speaking American concludes with a warning, based on the lessons of language history, for those of us who might care too much about the way things are: “Those who seek stability in English seldom find it; those who wish for uniformity become laughingstocks; those who create variety find a ready market for the language of their imagination.”

Ah, imagination. True enough. But I maintain it is possible to have it all—to be a bit wonkish and Wonka-ish at once, happily immersed in the minutiae of (current) grammar rules while still appreciating the true joy of language: all of those “scrumdidilyumptious” possibilities.