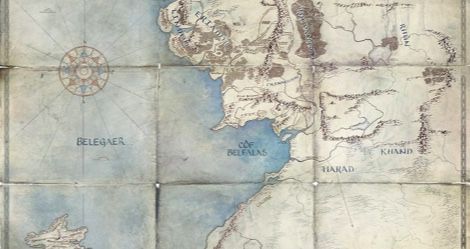 Lord of the Rings fans rejoice: in their new adaptation, Amazon is going far back. This is no re-adaptation. No, it’s going bigger—as many suspected and hoped, it’s going epic, and it’s going prequel.

The official Twitter account for the new adaptation has finally started tweeting. They first teased us a month ago with the exciting quote from J.R.R. Tolkien himself: “I wisely started with a map.”

Earlier today we got the map itself, gorgeous, full, and bigger than the one we would see from the Lord of the Rings films; more ancient, too. Númenor, the land of Men, is visible: this is notable because it was destroyed thousands of years before our main trilogy begins, and because Aragorn is descended from that land. Harad and Khand are visible as well—the people of those lands fought for Sauron, but we don’t know much about them—and the space around the kingdoms we know is very empty, perhaps implying that we will get to fill it in with more detail with this series.

The tweet alludes to the rings, naturally; but most notably, the tweet that follows the map reads, “Welcome to the Second Age.”

For those who may not know, the main trilogy of Lord of the Rings movies directed by Peter Jackson all fell in the Third Age—and then once the Ring was destroyed, the Fourth. The Second Age is a time we have heard much about and touched on but that we haven’t seen on screens: the centuries that led up to the Last Alliance of Elves and Men and the first downfall of Sauron.

Quick history lesson to fill in fans like me, who may be a bit more casual in their love of Tolkien. The Second Age, or “the age of Númenor,” was when the kingdom met its downfall because it challenged the Middle-earth gods, the Valar; and when the Last Alliance formed, between the Elven king Gil-galad and the Númenóreans who remained, led by Elendil (father of Isildur, who you may remember as the person who took the One Ring for himself).

That may sound completely new to many casual fans, but it will actually touch on much of what we know, and perhaps even some familiar names and faces. Elrond founded Rivendell in the Second Age. We might get nostalgic: the Dwarven city of Khazad-dûm was still thriving then, not yet taken by the Balrog in the Third Age, not yet called Moria. Not to mention that in the Second Age, the Rings of Power were forged.

If more casual fans want to catch up, or if old and tried fans want to reread, The Silmarillion is always there to give a good refresher on the events of the Second Age.