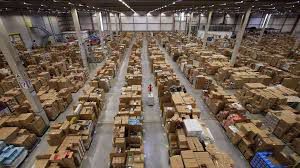 One of my favorite podcasts, Radiolab, did a great piece recently entitled “Brown Box,”  in which reporter Mac McClelland “travels into the belly of the beast that is the internet retail system and what she finds takes her breath away and makes her weak in the knees (in the worst way).”

McClelland takes a job as a “runner” for an internet retail warehouse (not one of Amazon’s warehouses, but never fear, we’ll get to the Dark Lord Amazon in good time, my pretties, patience will be rewarded) and finds the working conditions stressful and exhausting, the demands made on her body and mind almost impossible to meet. In order to get a package to your front doorstep in a few days’ time, runners are pushed to their limits, often only given a minute, or even seconds once they receive your order, to run through the gargantuan warehouse they work in to find your product. Hellacious labor combined with long hours, everybody’s favorite. As the piece states, we can’t make truck drivers go faster while delivering your packages, they have to obey the laws of traffic. There are no laws that state how fast you can run in a warehouse, and internet retail has capitalized on this, putting their warehouse workers into situations that are consistently grueling and sometimes dangerous. The piece concludes with a brief nod to Amazon’s role in the internet-retail-warehouse game. In order to get books (and other products) out on time, Amazon has allowed and encouraged its warehouse workers to toil under inhumane conditions.

I am constantly sassing about Amazon. I’m very uncomfortable with the fact that they’ve built a business upon convincing the general public that they are “overpaying” at a bookstore, that a hardcover is supposed to be fifteen dollars, that those extra ten to twelve dollars were just being funneled into the Scrooge McDuck money pits of agents, copy editors, publicists, jacket designers, as opposed to… oh, that’s right, a bunch of people who work hard and charge for a product what it’s actually worth. I’m a huge supporter of independent bookstores, and I really don’t like the strain Amazon’s gaming the system has had on my beloved indies.

Which isn’t to say that I’m not a complete hypocrite, and do order books on Amazon from time to time because I am the QUEEN OF HYPOCRITE KINGDOM (though if I know I can pop over to the bookstore and get a copy there, I’ll always go that route, but if it’s something obscure and weird and I want to use my Mom’s Prime to get it in two days…I go on Amazon and use my mom’s prime and get the book in two days). But not ONCE in my time using Amazon have I thought about WHERE my books come from. I’ve only ever been grateful for the convenience. I haven’t thought about WHY it’s convenient. And I’m embarrassed about that. I let myself be comfortable in my own ignorance. There are so many questions I ask about where my food comes from, my gasoline, even my makeup, it’s strange that I never thought to think about where my books come from or how they get to me so fast.

I’m not calling on a ban for buying books online but I am now much less comfortable with the idea of buying books online and it give me just another reason to be eeked out by the Dark Lord Amazon (and if I didn’t make it clear above, I already HAD a list). I just think it’s important for us to know where our things come from and how they get to us and it’s important to know the story so that we can make a decision regarding whether or not it’s a story we want to be a part of.

What about you guys? How do you weigh in on the situation?

Correction: This piece originally stated (going off information in the Radio Lab podcast) that Powell’s Books also used these problematic warehouses, but a rep from Powell’s contacted both Radio Lab and Book Riot to set record straight. Powell’s has let us know that over 90% of their online orders are filled in their own unionized warehouse, not outsourced. This post has been corrected to reflect that fact.