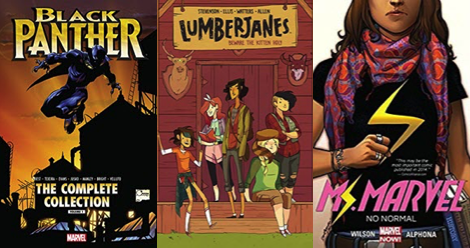 Amazon recently unveiled a new addition to their Prime Reading program: comics! It’s a perk I’ve been hoping for since Amazon took over Comixology and I’m happy to say that there are some top-notch comics in the Prime Reading mix (there are also some real dogs, but let’s accentuate the positive, shall we?). 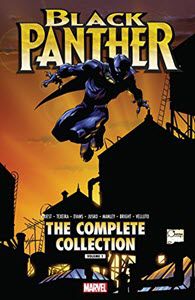 So you say you want more Black Panther? I’ve got good news for you! While the current run isn’t part of the Prime Reading collection, we do get 17 issues of Christopher Priest’s amazing 1998–2003 run on the title. Yeah, I know the costume is a little dated (I much prefer the modern “No capes!” version), but the stories are fantastic. Priest takes the Avenger in a whole new direction, with wicked satire and a tone that feels more like Pulp Fiction than Avengers. There’s a little bit of everything—from murder mysteries, to T’Challa being declared an enemy of Wakanda, to a deal with the literal devil (not to mention the might-be-reliable narrator Agent Ross losing his pants at some point). It’s these first issues that provide elements that made it into Black Panther movie (tonally, if nothing else) and set up Killmonger’s ascension in Volume 2. If you’re hungry for more T’Challa, more Wakanda, more Dora Milaje, more of what’s going on in less shiny corners of the Marvel universe, this is the place to start. 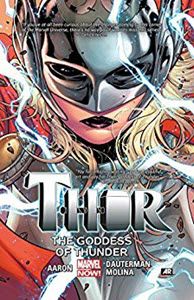 With Marvel’s Fresh Start, it seems the story of the venerable Goddess of Thunder is coming to an end. A shame, because Jason Aaaron’s Thor revitalized the character in a way that hadn’t been done since, well, he revitalized the OG Thor in Thor: The God Butcher. The new series finds Odinson unworthy of wielding Mjolnir and a new heroine fighting frost giants and other mythical beasts in his place. But even as she takes on classic Thor villains (in glorious technicolor spreads that capture the grandeur of her deeds), she’s beset by Odin himself, denying her claim to the hammer and rallying Asgard against her. The mystery of Thor’s identity nips at her heels like one of Odinson’s goats, but I love that it ultimately plays second fiddle to the main storyline (in which a familiar enemy wants nothing short of sowing chaos and destruction across all nine realms). It’s almost to the point that, when you do discover her identity, you don’t care, because you just want to get back to the action. Simply put, this Thor out-Thors Thor and you’ll just be thrilled to be along for the ride. 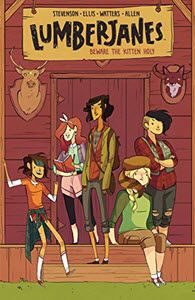 If superheroes and demigods aren’t your bag, then I highly recommend heading out to the woods and uncovering the mysteries that abound in Lumberjanes. Noelle Stevenson’s instant classic follows the adventures of five bunkmates at Miss Qiunzella Thiskwin Penniquiqul Thistle Crumpet’s Camp for Hardcore Lady Types. The Lumberjanes find themselves in the middle of the kind of adventures that you always dreamed of having in the lazy days of summer. After all, there’s nothing more enticing or more full of potential than the woods just beyond the camp clearing. Brooke Allen’s art is whimsical, fun, and imbues Stevenson’s writing with even more character. These girls have larger-than-life personalities and no problem sticking a thumb in the eye of standard gender stereotypes. But the gender politics are just a bonus and the story is universal and accessible to anyone who’s ever found themselves at the mouth of a cave, wondering what was inside. It’s a fun comic in a time when fun is hard to find. 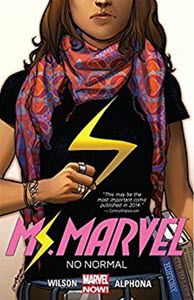 There hasn’t been a firebrand of a character that’s burned hotter on Marvel’s roster than Kamala Khan. When the Captain Marvel fangirl is exposed to Terrigen Mists, she discovers a heretofore unrevealed trove of powers and takes up the mantle of her idol. Wilson crafts an epic tale of a teenage girl trying to figure out herself, her powers, and how to best serve the community that she loves (she’s unabashedly a Jersey City girl through-and-through). The controversial part? Kamala is also a devout Muslim, who finds her superheroic endeavours at odds with her Pakistani family’s beliefs. Instead of making this a clickbait aside, however, it’s woven into the fabric of her story. Ms. Marvel goes places that no Marvel comic has explored and dares to show a slice of American life that is refreshingly different from the origins of nearly all of the characters in ol’ Earth 616. With art that’s cartoony and evocative and thrilling all at the same time, Ms. Marvel is unlike anything else in the Marvel stable and it’s a shining example of what can be done with mainstream comics. An absolute must-read. 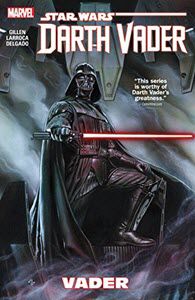 Rounding out the pack is another dude dressed all in black and sporting a cape (well, I guess it’s more of a robe…maybe a cloak? I digress). When I first heard about this series, which fills out the gaps of Vader’s ascendancy in the original trilogy, I was skeptical. After all, how much more did we really need to know about the whiny fallen Jedi? But then we were gifted with a tale of Vader finding ways to rebel within the system and turn it to his own designs. We were given some of the greatest new characters to grace the series since Rebels hit the airwaves with failed archaeologist Doctor Aphra and the murderous droid duo 0-0-0 and BT-1. In fact, the ancillary characters are so well developed, this first volume is as much Vader lurking in the background, serving as the murderous boogeyman as anything else. It captures that dark thrill that you had whenever Vader showed up on screen in A New Hope, inasmuch as you’re certain someone’s about to meet a violent end, but you just hope it isn’t someone you like. It’s one of the best Star Wars tales to come out of the new comic universe.