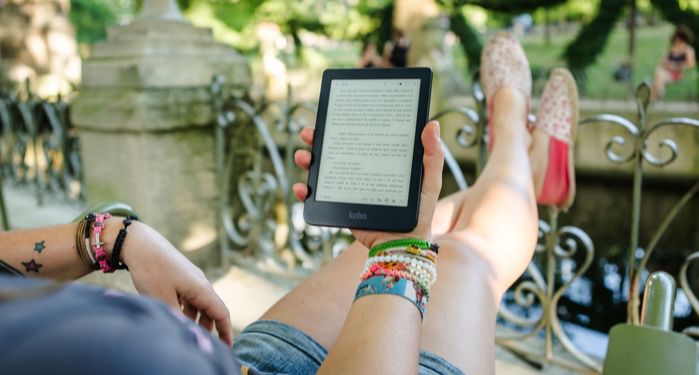 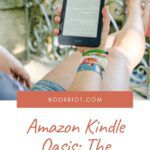 There’s no doubt that Amazon’s flagship device is one of the most expensive ereaders available on the market today. But what this Kindle Oasis review aims to examine is whether or not it’s actually worth it. After all, there are a host of cheaper ereaders out there including the Paperwhite, also sold by Amazon.

I personally have been using various Kindle devices for about a decade, dating back to when my dad first bought the Kindle Keyboard in 2010. It wouldn’t have won any prizes for beauty, but it got the job done. My little brother still uses it today, which just goes to show that these things are built to last. Next in my lineup was the super-basic Kindle 8 I bought in 2016. There was no built-in light in the touchscreen (Amazon does now offer this feature even in its entry level models). I was happy with it, but its existence was abruptly terminated when I dropped it into the bath in 2017.

And then came my current Kindle: a ninth generation Oasis I purchased two years ago for my 18th birthday. Although the latest model is a 2019 tenth-generation, the changes are very minimal. There’s now the option to have a warm sepia tone to the screen, rather than plain white, and there are 25 embedded LEDs lighting up the screen rather than 12. Apart from that the two ereaders are identical. 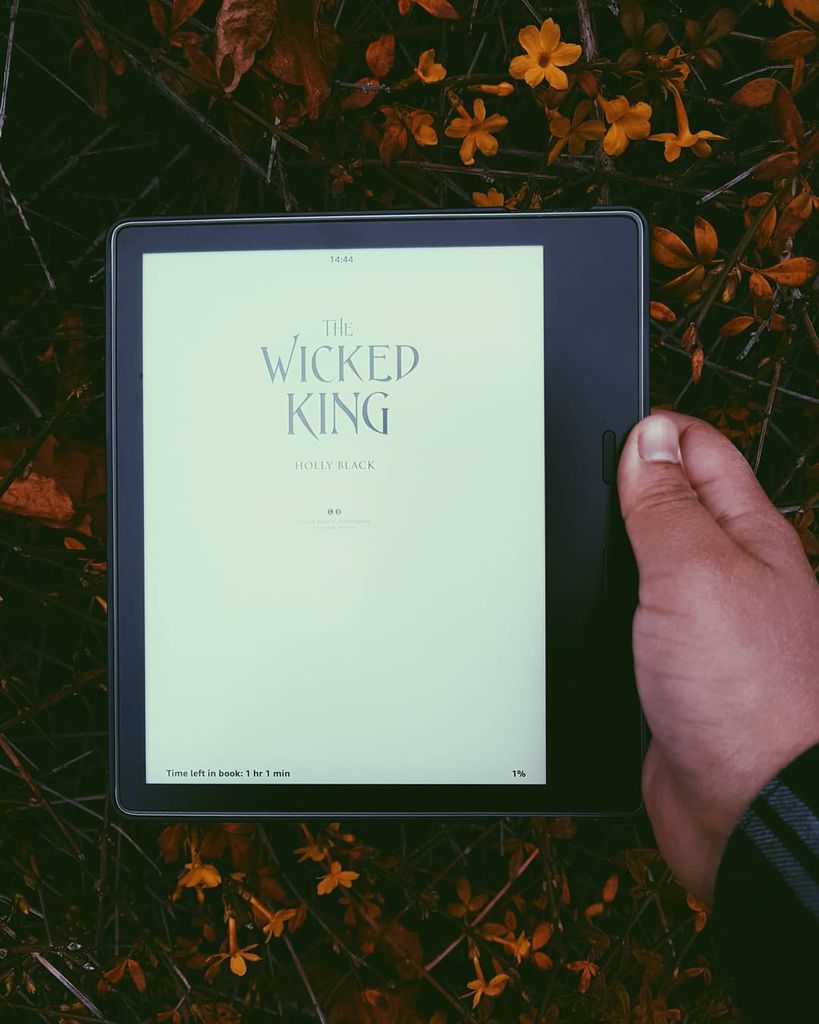 The thicker side means I can hold it with one hand.

To deal with the most important issue first:

How much does the Kindle Oasis cost?

The short answer is: a hell of a lot. The starting model, which has 8 GB storage, clocks in at £229.99 for the UK and $249.99 for the U.S. This increases to £260 and $280 respectively for 32 GB storage. The absolute max model – 32 GB plus free 4G connection so you don’t have to wait for WiFi to download books – will set you back by £320 or $350. For all but the last model, Americans will also have to pay an extra $20 not to have to see ‘Special Offers’. Those are basically ads that show up on the lock screen every time you close your Kindle. UK buyers are lucky here, since we don’t get those.

As you’ll have gathered by this point in my Kindle Oasis review, the ereader is expensive. But I will say that price-wise, I think it’s a good investment. Unlike with other electronics, your Kindle won’t become obsolete in a hurry. My old Kindle Keyboard still works perfectly after over a decade, and there are pretty much zero changes between my own ninth gen device and the tenth gen one. If you get this, you can expect to be using it for a good  few years.

As you can see from the image above, the Oasis’s most distinctive feature is its asymmetry. One side is raised in a hump to make one-handed reading easier. An internal gyroscope will flip the page around to accommodate for left-handed or right-handed readers, so you aren’t trapped gripping the device with a hand you don’t favour. The humped side also has two buttons to turn the pages.

In my opinion, the whole thing is very pretty. It’s made of a smooth cool brushed aluminium, and comes in the colours ‘graphite’ (AKA black) and ‘champagne gold’ (AKA pink). The metal can show fingerprints pretty easily, though, so I’d recommend adding a case. That’s also because you don’t want a £200-device smashing on the floor. The measurements are shown above, but for a real-life comparison, it’s about the length and weight of my Samsung S10. Essentially: it’s ridiculously light, very slim, won’t fit into a pocket but will fit almost everywhere else.

You may have noticed, however, that there’s no headphone jack. Listening to audiobooks has to be done via Bluetooth headphones. Also, a little irritatingly, it charges using a micro-USB port so I can’t use my phone’s USB-C charger on it.

Now, let’s talk about the internal features. The 7-inch square screen is backlit with embedded LEDs, meaning you don’t have to rely on your own lights. It can be set to show white, black, or sepia-toned pages. You can of course adjust the brightness, fonts, and font size. The Oasis also has all of the software features of its older siblings: dictionary definitions appear when you highlight a word, the Goodreads app is built in (see image above) and there’s a clunky ‘Experimental Browser’. Nor are you limited to buying books available on the Kindle store: it’s possible to import your own ebooks.

One thing you need never worry about is running out of storage space. Unless you listen to lots of audiobooks, which take up lots of megabytes, 8 GB will definitely be enough. Over the last two years I’ve only used up only a single gigabyte, despite downloading hundreds of books. Speaking of audiobooks: you can also store Audible purchases on your Kindle. If you’ve bought the corresponding ebook too, Whispersync means you can switch seamlessly between reading and listening. One will pick up where you left off with the other.

One thing I initially found annoying is the total lack of colour. Since Kindles are ereaders, not tablets, they use e-ink technology, which means all covers are rendered in black and white. If you have particularly gorgeous covers on your books, too bad. 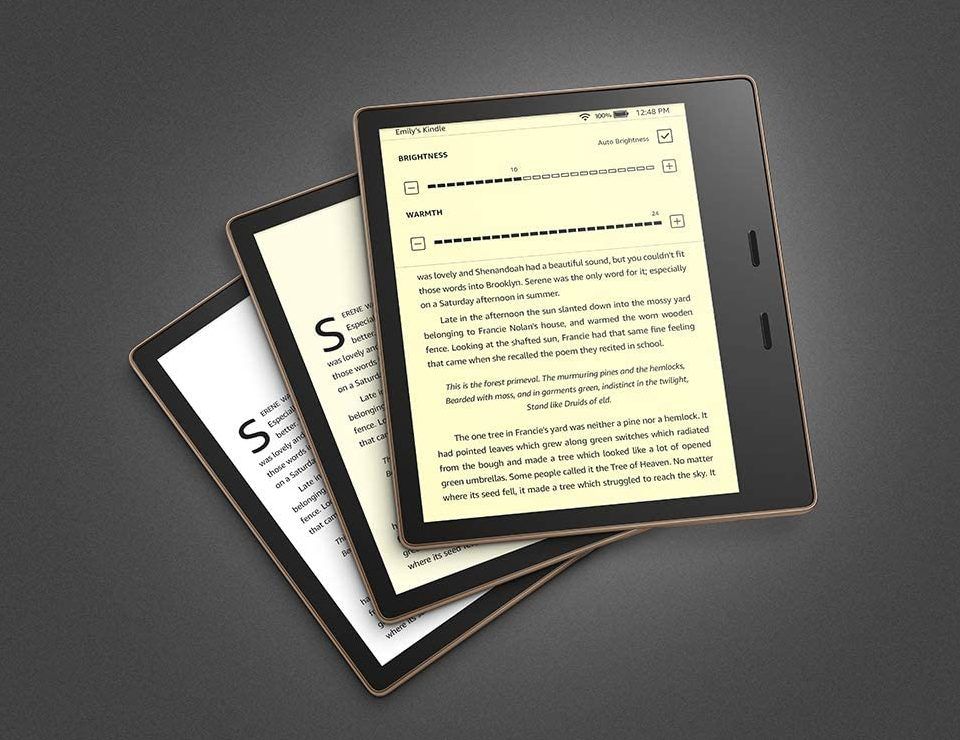 This is probably the weakest part of the whole Kindle Oasis package. Amazon advertises the device as lasting six weeks on a single charge, but that’s obviously garbage. It would only apply if you had the WiFi turned off, read for a solitary half-an-hour a day, and had the brightness at half-mast. If I read for about an hour a day, with WiFi on and regular brightness, it needs charging about every 4–5 days.

That’s still decent compared to the phone I charge daily, but it’s no six weeks.

Is the Kindle Oasis waterproof?

This is a question I was overwhelmingly interested in, seeing as how I killed my last Kindle by dropping it into the bath. The answer is yes: yes, the Kindle Oasis is waterproof. If you want to get technical about it, it has a waterproof rating of IPX8, which means it can withstand depths of over a metre and still come out fine.  You probably won’t be going around leaving your Kindle submerged underwater for long periods of time, and it can definitely survive a brief drop in the bathtub. 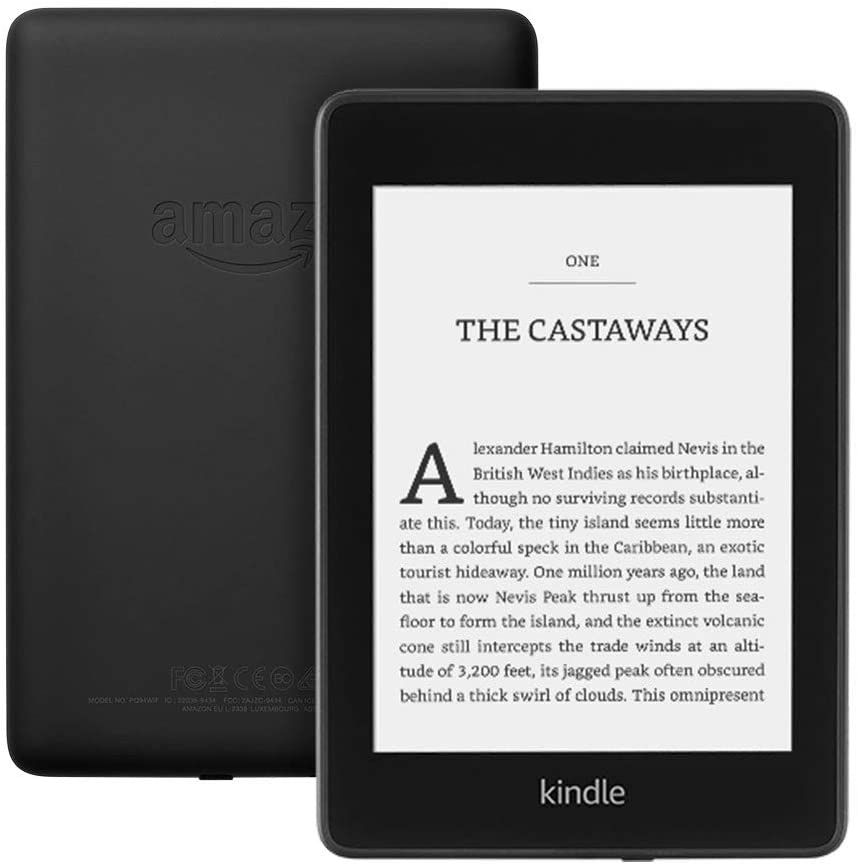 The biggest competition for the Kindle Oasis – at least from within Amazon’s own lineup of devices – is probably the Kindle Paperwhite. It’s the midrange model, being a step up from the basic Kindle. Here’s a head-to-head comparison below.

Price: At £120 (UK) or $130 (U.S.), the Paperwhite is obviously significantly cheaper. For British customers though, that’s with the Special Offers. Without Special Offers is £130.

External features: Huge differences. The Paperwhite comes in typical ereader shape: as you can see above, it’s a flat slab of a tablet, with a plastic back and no buttons. The 6-inch touchscreen is backlit with 5 LEDs and has the same resolution, at 300 pixels per inch. It’s 12 grams lighter and marginally smaller than the Oasis, so it’s more portable.

Internal features: Pretty much identical to the Oasis. There’s Bluetooth audio for audiobooks, which it didn’t have before.

Battery life: Not having one of these, I can’t personally contradict Amazon’s claim that the Paperwhite will last for up to six weeks if you read 30 minutes a day. But I’d take that with a pinch of salt. The battery life is probably a little better than my Oasis, so I’d say you’ll have to charge maybe every couple of weeks.

Waterproof status: The same. The Paperwhite is now also possessed of an IPX8 rating.

Kindle Oasis: Should I get one?

Ultimately, a lot of things have changed from when I bought my Kindle at the start of 2018. Back then, the Oasis was the only one with Bluetooth integration and water resistance. Since those elements have been brought to the Paperwhite, the differences between them are now purely cosmetic.

I personally don’t regret my choice. As a book blogger, I do a LOT of reading, and the Oasis is definitely the most comfortable and stylish device on which to get through my backlog of ARCs. I’m also confident that it won’t become obsolete for at least the next decade or so. But if you want a more traditional-looking ereader, or you don’t read enough to justify the inflated price tag, go for the Paperwhite.

Or – if you want to go wild and get an ereader that’s not produced by Amazon – try these tablets for reading suggestions.