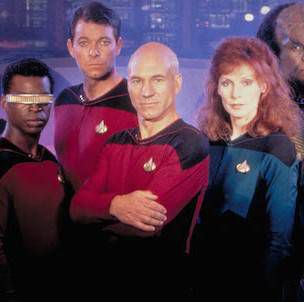 Friends, Remans, Undiscovered Countrymen! Lend me your Spock ears! (I am sorry for this entire opening sentence.) I’ll be honest with you, it doesn’t seem like the best time to be a Star Trek fan. It’s the era of the geek, but not all geekery is embraced equally and the rampant enthusiasm for Star Trek stuff feels like it’s cooled a bit. It’s the tenth anniversary of Star Trek: Enterprise going off the air, so it’s been a decade since we’ve had a Star Trek TV show. We’ve had a couple of new Star Trek films, and while there’s been a lot of really good elements in them, there’s also some dodgy stuff, not to mention plots that will collapse if you blow on them slightly. (I’ve unkindly referred to them as “Star Wars films with Spock ears attached” and I don’t think I’ve been far off.) Yes, it seems like the fandom that I would write into the “Religion” box on a form is kind of fading away, and that made me sad.

However, that was before I bought a trilogy of Star Trek novels on a whim and discovered something immensely exciting. 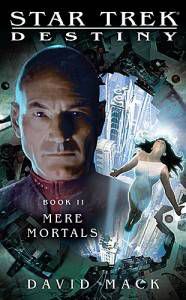 The books were the Destiny trilogy of Star Trek novels, by David Mack. I bought this huge omnibus of the three books at a toys-books-calendar store in a local mall for the two deep and well-thought-out reasons of 1) it had been a decade since I’d bought a Trek novel and 2) it was huge and, like, three bucks. Then it just hung around on my overloaded shelves while I got on with other stuff.

Eventually, though, I read them, and they were fantastic. The story was huge and epic, a gigantic space opera set in the Star Trek universe (no reboots or alternate realities here) after Star Trek: Nemesis, a big old story about the Borg invading the Alpha Quadrant and what the various Star Trek characters and their ongoing lives were doing about it. They had all moved on since their shows and movies, to new ships and marriages and lives. It was big and fun and I loved it. It wasn’t afraid to cause lasting, actual effects on the Star Trek universe, and I loved that, too.

I was enthused because even when I bought a few Trek novels as a kid, I never liked them. Granted, this was ages ago, but they just weren’t that good. I’ve revisited some of them and still think they’re terrible, on the whole. So I was happy to find Trek novels I was loving.

Thus enthused, I picked up a paperback Trek novel I had bought the year before but never read, happy to continue reading Trek novels in addition to my other readings. But on the first page, it said This book takes place after the events in Star Trek: Destiny. And I read it. And they did!

Off to Google I went, where I discovered lists like this one which I am currently using, and also insane charts like this one (I can’t follow it. I feel like if I could, I’d be accepted into Mensa or something. It does look like fun, though). There was a huge universe-scale story happening, in the Star Trek world, with the focus shifting to different characters and crews depending on what books you happened to be reading…but if you were gradually reading them all, you were discovering this massive interwoven tapestry of storytelling happening in the Trek world.

This is the Trek equivalent of the Marvel universe right now, where the story happening in the Marvel movies all connect up, and also spill over and connect up with the TV shows like Agents of SHIELD or Agent Carter or Daredevil. It’s all woven together, events happening simultaneously in lots of different forms (like the events at the end of Captain America 2: Winter Soldier spilling over into the end of season 1 of Agents of SHIELD. You see?) It’s just like that, but for Star Trek. The books don’t always follow each other neatly, like TV episodes might. The Voyager novel I just finished was spread across five or six years, encompassing lots of the other books in its arc. But they all come together nicely if you don’t worry about it too much and just get into the book itself and read along.

I’m using that first link I posted, a nice neat text list of the books involved. I’m halfway through the chapter 2 part of the list. I haven’t read the chapter one books, because I haplessly stumbled into all of this via buying that big omnibus of Trek novels that started chapter two, and now I’m too caught up to backtrack. I plan to go back and do those first books when I’ve finished following this story wherever it’s going (and then, next up, figuring out what comes after). I imagine starting with the chapter one selection of books would be wisest, but failing that, Star Trek Destiny is a pretty good trilogy to jump in on. You can pick up the stuff you don’t get as you roll along, and it’s an awful lot of fun.

So! Come read a bunch of Star Trek novels with me! I was going to end this with “Today is a good day to read” but I’ve been told that after the joke in the first line of this article, I will be fined heavily if I do any others. So I won’t. Whew. 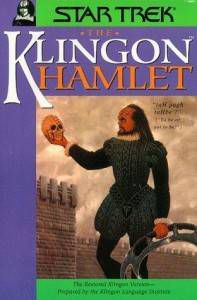