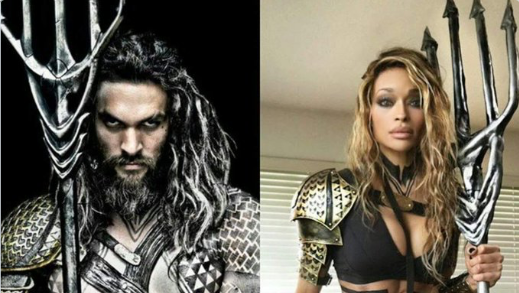 The #28DaysofBlackCosplay hashtag has become one of my favorite ways of celebrating Black History Month. I love being a blerd (black nerd) and I love seeing other blerds represent their creativity and passion through cosplay. I highly recommend you check out the hashtag yourself on Twitter because I can’t possibly include all the awesomeness in this one post. Here are some of my favorites from the past few weeks:

This crossplay of Jason Momoa’s Aquaman is so incredibly fierce:

Okay so this doesn’t have the #28DaysofBlackCosplay hashtag but I just gotta include black Hermione Granger:

I admit, I’ve fallen out of love with Rat Queens but Dee always holds a special place in my heart:

This Missandei from Game of Thrones is A+:

Just saw the #28DaysOfBlackCosplay tag going around! Here is when I went to DragonCon as Missandei from GoT. 😅 pic.twitter.com/1SH57T7u6N

This right here has convinced me that I need some Steven Universe in my life:

You cannot mention black cosplay and not make note of Black Panther and Storm:

Or Miles Morales, for that matter:

Everybody sleeps on Disney’s version of Esmeralda and they shouldn’t:

Day 4 #28daysofblackcosplay is #radiant. I'm going to go with my #Esmeralda #cosplay ♡ She's one of my favorite #disney girls #disneycosplay pic.twitter.com/DkKYmX5W6V

I am here for every version of Lady Loki forever and always:

Love this shot of Green Lantern:

This old school Luke Cage is killing me:

Honestly, I think this Doc McStuffins wins the whole month:

Okay, so this sweet baby dumplin is officially the cutest part of #28DaysOfBlackCosplay 😍I LOVE HER. @chrisdocnee look! #docmcstuffins pic.twitter.com/P844TKgCIQ