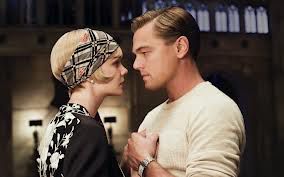 I thought a lot worked in this movie! No, really, I did, and I promise I’m not sustaining a head injury! Let’s run it down!

Most of the Casting

I had my doubts about Leonardo DiCaprio even though I was in the front row licking the screen when Titanic came out in ’97. But I thought he was quite good as Gatsby.

Okay, I didn’t love his intro where Toby Maguire was talking about how amazing times Gatsby’s smile was and DiCaprio flashes the most boring smile in the history of close-lipped grins.

But besides that, DiCaprio hit the main beats for me. The weird accent! The pink suit! Getting crazy in the rain!

I also really liked Carey Mulligan as Daisy, and as much as I loved her in An Education and that one episode of Doctor Who they always show on airplanes, I haven’t really been on board with her since. But I’m on board again! She balanced the fancy-pants-ness and ugly crying of Daisy Buchanan quite nicely. Also she rocked all her hats and headbands so hard she almost didn’t even need to be good at acting. But she was. She was good at acting.

I still don’t exactly understand why they cast an unknown as Jordan Baker, but I really liked Elizabeth Debicki in the role. Let me put it this way, there are so many A-list actresses I would NOT want to see play that role (or any role ever again), so I was down with a girl who could believably inhabit the character.

Joel Edgerton was so Tom Buchanan it was like they exhumed F.Scott Fitzgerald’s body, used science fiction to resuscitate his brainwaves, and turned all that into Edgerton’s performance.

Isla Fischer screamed a lot. That’s fine for Myrtle Wilson. It’s also fine if you have what amounts to five and a half minutes of screen time.

TEEN GATSBY! Callan McAuliffe was a dead ringer for Teen Leo! Can he please be in Titanic 2: Just Kidding, Jack Dawson Didn’t Die and He and Rose Get to Ride Horses on the Beach and Go on Roller Coasters Until They Both Throw Up? PLEASE PLEASE?

All right, here it comes. I wasn’t the biggest fan of Tobey Maguire in this role. He just did too much acting with his eyes! I know Nick Carraway gets caught up in the madness of the Jazz Age, but I just feel like the character has more respect for himself. Nick Carraway doesn’t have to smile with his eyes so hard.

The Whole Being Faithful to The Book Thing

So many of my favorite lines and scenes were in here! I got Wet Gatsby Crazy in the Rain AND Methamphetamines Gatsby Throwing His Shirts Off The Balcony. I got Tom and Myrtle’s Drunk Apartment Party AND Gatsby’s Hundred Thousand Dollar Mansion Party AND Everyone Being Hot and Yelling at Each Other in the Hotel Room.

I did miss seeing Jordan and Nick’s relationship evolve and dissolve.

I also missed glimpses of Tom and Daisy’s daughter Pammy. I love seeing Tom and Daisy be “careless people” parents in the book.

Also, did I miss the line “Daisy’s voice is full of money” while I was running out to get Milk Duds? Or did they just not do it? For shame if it’s the latter, for shame!

You know what I could have done less with? The green light at the end of the dock and the always watching eyes of Dr. T.J. Eckleberg. Holy Moses, they were like in every other frame of the movie. SYMBOLS, WE GET IT, THEY’RE SYMBOLS THAT MEAN THINGS!

Okay, here’s the part of the adaptation I actually hated. The Nick Carraway Figuring His Shit Out With a Therapist And That’s Where All The Voice Over Comes From. It just felt like such a hacky and obvious way to explain the voice over.

I actually wanted Carraway to pull a House of Cards and speak directly to the camera while he was narrating the story. This move would have totally worked in Baz Luhrmann’s Do Drugs Before You Pick Up a Camera School of Filmmaking.

No one can throw a party like a Baz Luhrmann film. That first party at Gatsby’s was just dripping with rad. It made me feel as cool as I know Gatsby wanted his guests to feel at his parties. Also, it sounds like Luhrmann is eyeing Hamlet as his next film. Hot damn do I want to see THAT puppet show.

Because, as we all know, Baz Luhrmann hates period appropriate music. I really liked the contemporary hip-hop and moody rock. It made the decadence of the period feel edgy and relevant as opposed to dated and quaint. Also, what are you going to do when Jay-Z is producing your movie? Be like “Oh, we were just going to do Tin Pan Alley songs, but thanks for offering all your baller connects to us, Jay-Z, you’re a real pal.” NO THAT’S NOT WHAT YOU DO!!!

So what did you guys think of Gatsby! Are you Team “That Movie Was Rads-by” or are you Team “How Could They Ruin My Favorite Book, I’m Crying Because I’m Sads-by”?