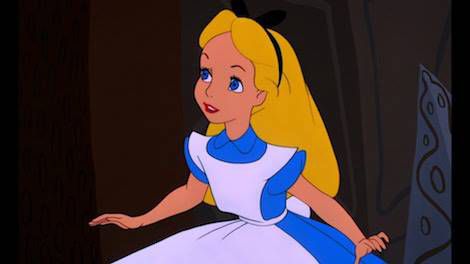 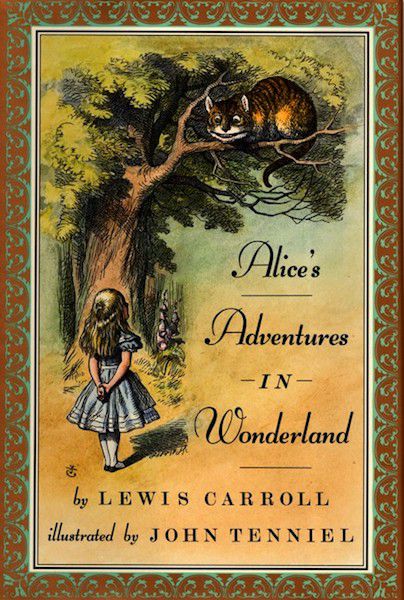 (Note: All images are from Etsy stores — click the image to find the piece with your favorite Alice in Wonderland quotes.)

Alice in Wonderland quotes From Alice Herself

“And what is the use of a book,” thought Alice, “without pictures or conversations?” —Chapter 1, Down the Rabbit-Hole

“How funny it’ll seem to come out among the people that walk with their heads downwards! The antipathies, I think—” —Chapter 1, Down the Rabbit-Hole

“Oh, how I wish I could shut up like a telescope! I think I could, if only I knew how to begin.” For, you see, so many out-of-the-way things had happened lately, that Alice had begun to think that very few things indeed were really impossible. —Chapter 1, Down the Rabbit-Hole

It was all very well to say “Drink me,” but the wise little Alice was not going to do that in a hurry. “No, I’ll look first,” she said, “and see whether it’s marked ‘poison’ or not.” —Chapter 1, Down the Rabbit-Hole

“But it’s no use now,” thought poor Alice, “to pretend to be two people! Why, there’s hardly enough of me left to make one respectable person!” —Chapter 1, Down the Rabbit-Hole

“Curiouser and curiouser!” cried Alice (she was so much surprised, that for the moment she quite forgot how to speak good English). —Chapter 2, The Pool of Tears 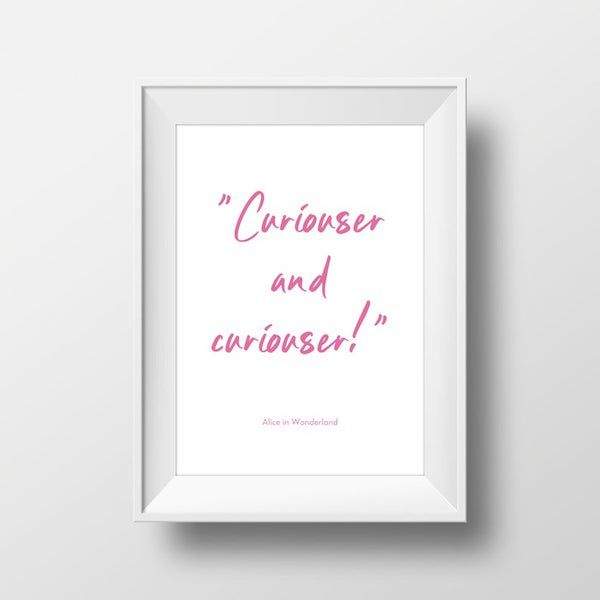 “I wish I hadn’t cried so much!” said Alice, as she swam about, trying to find her way out. “I shall be punished for it now, I suppose, by being drowned in my own tears! That will be a queer thing, to be sure! However, everything is queer to-day.” —Chapter 2, The Pool of Tears

“I suppose I ought to eat or drink something or other; but the great question is ‘What?’” —Chapter 4, The Rabbit Sends in a Little Bill

“I do wish I hadn’t drunk quite so much!” —Chapter 4, The Rabbit Sends in a Little Bill

“When I used to read fairy tales, I fancied that kind of thing never happened, and now here I am in the middle of one!” —Chapter 4, The Rabbit Sends in a Little Bill

“Well! I’ve often seen a cat without a grin,” thought Alice; “but a grin without a cat! It’s the most curious thing I ever saw in all my life!” —Chapter 6, Pig and Pepper

“How do you like the Queen?” said the Cat in a low voice.
“Not at all,” said Alice: “she’s so extremely—” Just then she noticed that the Queen was close behind her, listening: so she went on “—likely to win, that it’s hardly worth while finishing the game.” —Chapter 8, The Queen’s Croquet-Ground

“I don’t see how he can ever finish, if he doesn’t begin.” —Chapter 9, The Mock Turtle’s Story

“Speak English!” said the Eaglet. “I don’t know the meaning of half those long words, and, what’s more, I don’t believe you do either!” —Chapter 3, A Caucus-Race and a Long Tale

“I’m older than you, and must know better.” —Chapter 3, A Caucus-Race and a Long Tale

“The best way to explain it is to do it.” —Chapter 3, A Caucus-Race and a Long Tale

“The Duchess! The Duchess! Oh my dear paws! Oh my fur and whiskers! She’ll get me executed, as sure as ferrets are ferrets!” —Chapter 4, The Rabbit Sends in a Little Bill

“Who are you?” said the Caterpillar.
This was not an encouraging opening for a conversation. Alice replied, rather shyly, “I—I hardly know, Sir, just at present—at least I know who I was when I got up this morning, but I think I must have been changed several times since then.”
“What do you mean by that?” said the Caterpillar, sternly. “Explain yourself!”
“I ca’n’t explain myself, I’m afraid, Sir,” said Alice, “because I am not myself, you see.” —Chapter 5, Advice from a Caterpillar 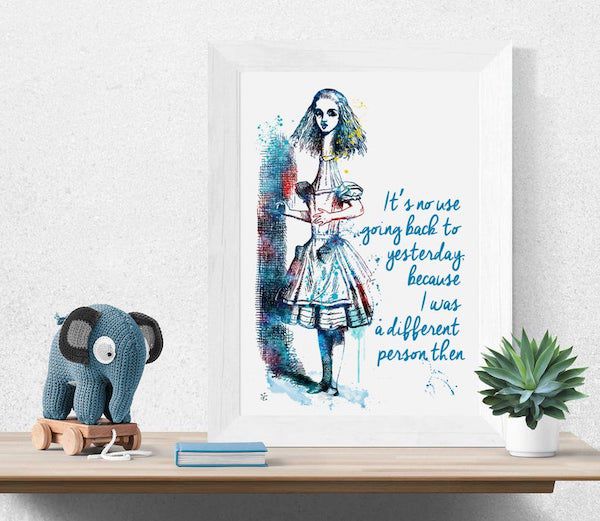 “Would you tell me, please, which way I ought to go from here?”
“That depends a good deal on where you want to get to,” said the Cat.
“I don’t much care where—” said Alice.
“Then it doesn’t matter which way you go,” said the Cat.
“—so long as I get somewhere,” Alice added as an explanation.
“Oh, you’re sure to do that,” said the Cat, “if you only walk long enough.” —Chapter 6, Pig and Pepper

“In that direction,” the Cat said, waving its right paw round, “lives a Hatter: and in that direction,” waving the other paw, “lives a March Hare. Visit either you like: they’re both mad.”
“But I don’t want to go among mad people,” Alice remarked.
“Oh, you ca’n’t help that,” said the Cat: “we’re all mad here. I’m mad. You’re mad.”
“How do you know I’m mad?” said Alice.
“You must be,” said the Cat, “or you wouldn’t have come here.” —Chapter 6, Pig and Pepper 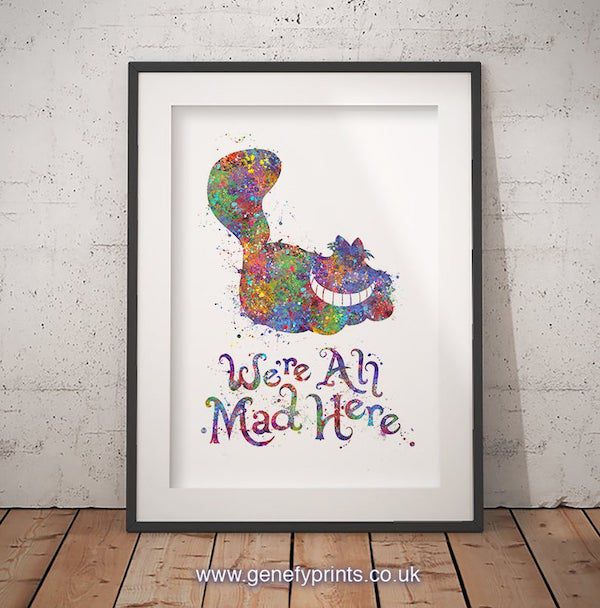 “To begin with,” said the Cat, “a dog’s not mad. You grant that?”
“I suppose so,” said Alice.
“Well, then,” the Cat went on, “you see a dog growls when it’s angry, and wags it’s tail when it’s pleased. Now I growl when I’m pleased, and wag my tail when I’m angry. Therefore I’m mad.”
“I call it purring, not growling,” said Alice.
“Call it what you like,” said the Cat. —Chapter 6, Pig and Pepper

“If everybody minded their own business,” the Duchess said, in a hoarse growl, “the world would go round a deal faster than it does.” —Chapter 6, Pig and Pepper

“Tut, tut, child!” said the Duchess. “Everything’s got a moral, if only you can find it.” —Chapter 9, The Mock Turtle’s Story

“And the moral of that is—’Oh, ‘tis love, ‘tis love, that makes the world go round!’”
“Somebody said,” Alice whispered, “that it’s done by everybody minding their own business!”
“Ah well! It means much the same thing,” said the Duchess, digging her sharp little chin into Alice’s shoulder as she added, “and the moral of that is—‘Take care of the sense, and the sounds will take care of themselves.’” —Chapter 9, The Mock Turtle’s Story

“Really, now you ask me,” said Alice, very much confused, “I don’t think—”
“Then you shouldn’t talk,” said the Hatter. —Chapter 7, A Mad Tea-Party 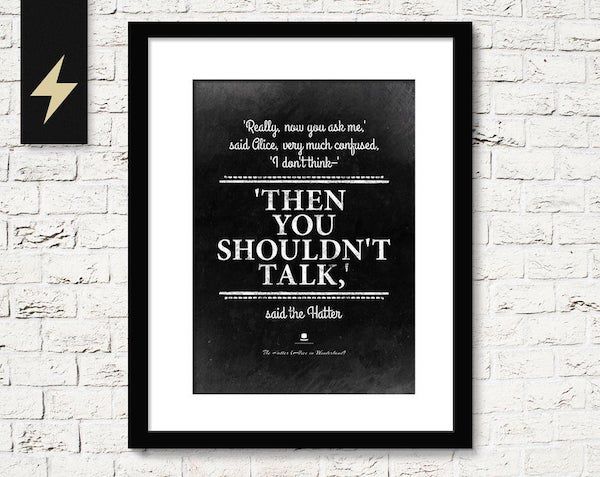 “Take some more tea,” the March Hare said to Alice, very earnestly.
“I’ve had nothing yet,” Alice replied in an offended tone: “so I ca’n’t take more.”
“You mean you ca’n’t take less,” said the Hatter: “It’s very easy to take more than nothing.” —Chapter 7, A Mad Tea-Party

The Mock Turtle and the Gryphon quotes

“And how many hours a day did you do lessons?” said Alice, in a hurry to change the subject.
“Ten hours the first day,” said the Mock Turtle: “nine the next, and so on.”
“What a curious plan!” exclaimed Alice.
“That’s the reason they’re called lessons,” the Gryphon remarked: “because they lessen from day to day.” —Chapter 9, The Mock Turtle’s Story

The Queen of Hearts quotes

The Queen turned crimson with fury, and, after glaring at her for a moment like a wild beast, began screaming “Off with her head! Off with—”
“Nonsense!” said Alice, very loudly and decidedly, and the Queen was silent. —Chapter 8, The Queen’s Croquet-Ground

The King of Hearts quotes

“I don’t like the look of it at all,” said the King: “however, it may kiss my hand, if it likes.” —Chapter 8, The Queen’s Croquet-Ground

“If there’s no meaning in it,” said the King, “that saves a world of trouble, you know, as we needn’t try to find any.” —Chapter 12, Alice’s Evidence

“Begin at the beginning,” the King said, very gravely, “and go on till you come to the end: then stop.” —Chapter 12, Alice’s Evidence

“If you didn’t sign it,” said the King, “that only makes the matter worse. You must have meant some mischief, or else you’d have signed your name like an honest man.” —Chapter 12, Alice’s Evidence

“Rule Forty-two. All persons more than a mile high to leave the court.”
Everybody looked at Alice.
“I’m not a mile high,” said Alice.
“You are,” said the King.
“Nearly two miles high,” added the Queen.
“Well, I sha’n’t go, at any rate,” said Alice; “besides, that’s not a regular rule: you invented it just now.”
“It’s the oldest rule in the book,” said the King.
“Then it ought to be Number One,” said Alice. —Chapter 12, Alice’s Evidence

What are some of your favorite Alice in Wonderland quotes? Want even more Alice? Check out:

It’s Not A Dream: 18 Works of Alice In Wonderland Art

Down The Rabbit Hole: 5 Alice In Wonderland Retellings