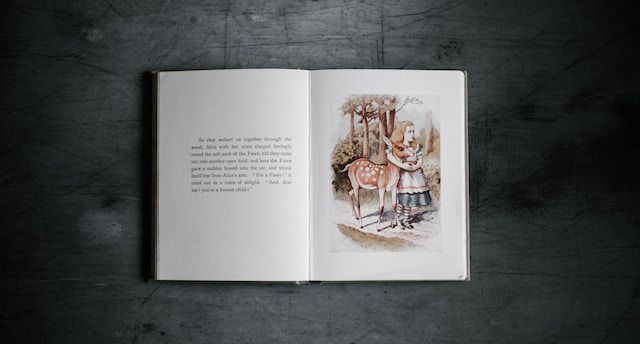 Alice in Wonderland has been one of my favorite books my entire life. I dressed as Alice as a little girl and the Mad Hatter as an adult.  The Mad Hatter’s Tea Party was the theme of my Bachelorette Party, with one of my bridesmaids jumping out of the bathroom in a full White Rabbit Costume. Most recently, my husband and I went to Oxford, UK, to follow in the footsteps of the complicated creator of the Alice books, Lewis Carroll.

But one of my favorite parts of the Alice is the visual culture. While John Tenniel’s original illustrators gave such vitality and vibrancy to the odd and quirky characters, the two books have inspired so many artists and illustrators in the 150+ years since the first printing. To celebrate the many beautiful adaptations of Alice in Wonderland, I have assembled a list of 10 illustrators/artists who have created delightful and weird versions of Alice in Wonderland. This is not a definitive list, but an attempt to show you all the other illustrators of this wondrous text. 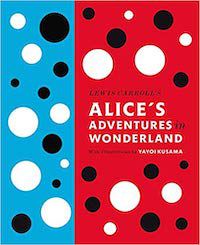 Japanese artist Kusama is best known for her blockbuster Infinity Rooms, which are extraordinary in their own right, and her bright polka dotted shapes. In 2012, she published her own version of Alice in Wonderland that uses those bright beautiful polka dots throughout the text. 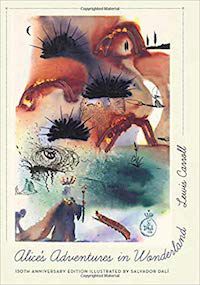 The master surrealist Dali published his own version of Alice in 1969. My Modern Met reported: “Dalí created twelve heliogravures for the occasion—one illustration for each chapter—as well as a four-color etching as the frontispiece. Only 2,700 of the edition were printed, and the artist signed each original etching.” The illustrations look like vibrant watercolors that employ some of Dali’s better known imagery, such as melted clock and strange insects.

Illustrator and manga artist Okama also did a manga version of Alice in Wonderland in 2010. While it’s mostly in black and white, I love how the style really seamlessly melds with the story. I particularly love the image of the Red Queen scowling at Alice, who has rabbit ears on. Unfortunately, I can’t find a version of this being sold right now on Amazon.

While the illustrator is unfortunately anonymous, this text was the second version of Alice translated into Hindi. I don’t love the cover, but the black and white illustrations inside are really well done. The illustrations are crisp and detailed, giving a lot of flair to the story. Unfortunately, I can’t find a version of this being sold right now on Amazon. 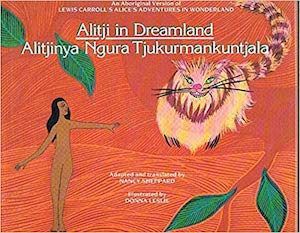 While Sewell appears to have done several illustrations, I’d like to focus on his illustrations for 1975 Alitjinya ngura Tjukurtjarangka / Alitji in the Dreamtime translated by Nancy Sheppard into Pitjantjatjara. It’s called Aboriginal Alice but the illustrations are quite unique. University of Maryland notes: “Byron’s illustrations are brilliantly modeled on the mystical bark painting of the indigenous peoples of the Northern territory.” The white rabbit has become a kangaroo with a watch inside his belly.

While most know the Czech director for his stop motion animation version of Alice, he also illustrated book versions of Alice and Through the Looking-Glass. The illustrations are ornate and have a look of puppets. Originally, the illustrations were only in a Japanese version of the book, but an English version came out in 2018. I can’t find a version of this being sold right now on Amazon. 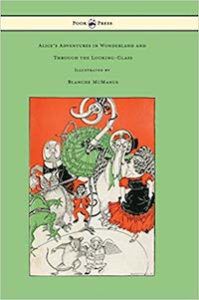 McManus was a U.S.-born writer and artist created 16 illustrations of Alice in 1899. According to the University of Florida George A. Smathers Library, it was the first version with new illustrations after Carroll’s death.  Each one features black, white, red and pale green colors with incredible details. I particularly love her version of the Mad Hatter – wearing three hats and the glowering Humpty Dumpty.

Kalinovsky was a Russian painter who illustrated over a 100 books including Master and Margarita. But he also did these black and white illustrations for Alice in Wonderland that have the detail and eeriness of Edward Gorey, which means I adore them. Unfortunately, I can’t find a version of this being sold right now on Amazon. 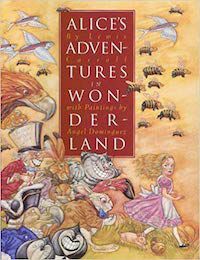 Spanish illustrator Dominguez has worked on many books including the beloved Alice in 1996. The pictures are alive with color and detail; I like how the Cheshire cat lounges on its branch while talking to Alice in one version. Or how he drew the different suits of cards on  on the back of the insects. 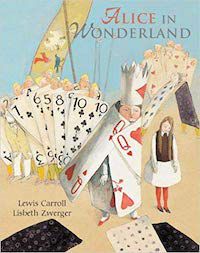 Austrian illustrator Zwerger is well-regarded and well-awarded. Simon & Schuster write: “Lisbeth Zwerger has been accorded nearly every prize that can be given, including the highest international award for lifetime achievement, the Hans Christian Andersen Medal.” You can see why with her watercolor-like illustrations of Alice. What they lack in detail, she makes up for with the beauty yet surreal images. I love the Red Queen has the cards wrapped around her body.