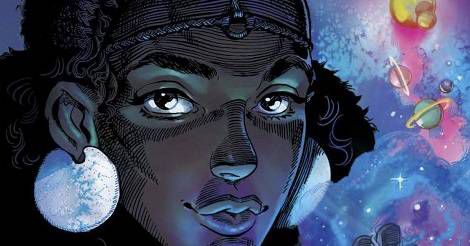 Boetema has no real home.

With her brother Inotu and their flighty parents, Boetema has moved from town to town through the wastes of a more advanced civilization, dogged at each stop by bad luck and her father’s hubris. Finally her parents accept a dangerous job as salt farmers, leaving the much more responsible Boetema to watch over Inotu until the paychecks come in. But even within the walls of their home, the privacy of her own mind, Boetema can’t feel safe.

Because at night, Boetema travels. 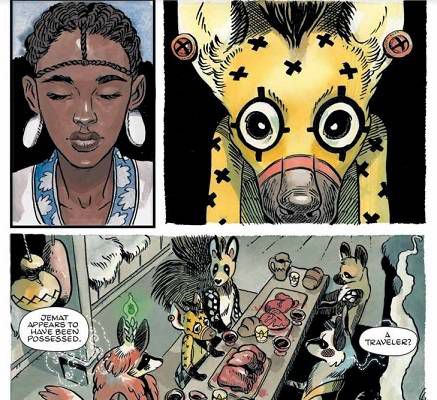 Her vivid “dreams” are actually astral projection, sending her spirit into the bodies of tigers and fish and polo-shirted insect-creatures on other planets. Here’s where Kit Seaton’s expressive watercolors truly shine – each world has its own lush color scheme that contrasts with the blues, browns, and grays of the waking world. 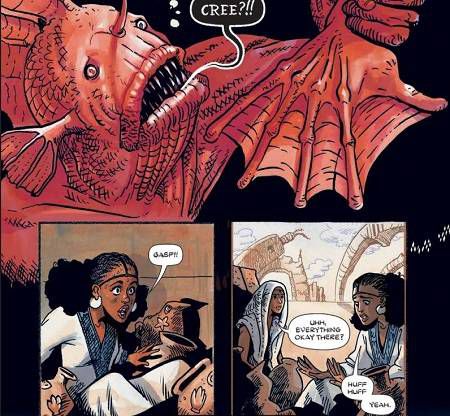 But just as Boetema begins to control and even enjoy her powers, she causes an accident that could have disastrous consequences for an alien girl named Lindu.

Meanwhile, Inotu runs afoul of a dangerous cyborg warrior (yes, you read that correctly), and the siblings are forced on the move again. Boetema struggles to guide them to the prosperous (but possibly mythical) city of Yopan by day and find her way back to the mystery world she meddled in by night.

Creators del Duca and Seaton drop the reader into a world that doesn’t map onto any exact culture or time period, populated almost entirely by characters by color – a setting that’s certainly “other” by mainstream pop-culture standards. The true joy of the book comes from the way they quickly normalize this “other” by sending us, through Boetema’s eyes, into even more fantastical places that are just as strange to her as they are to us. Each return to Boetema’s world lands us in a place that we know, among characters we can at least sometimes predict, and our relief and affection erases any exoticism from the human characters and their society.

The book’s emotional core is Boetema and Inotu’s often contentious but always loving sibling relationship. Their struggle to trust and respect each other’s independence as their experiences of early adulthood diverge will resonate with readers who have watched their siblings change and feared that one day they may no longer recognize each other. 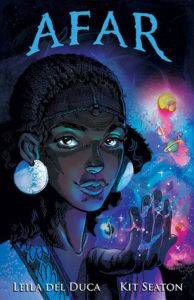 My biggest quibble with Afar is that there’s not enough of it. I wanted to spend more time on Lindu’s alien planet, learning about it through Boetema’s eyes, rather than sorting through a kaleidoscope of Lindu’s memories. That rushed exposition soured the final third of the story for me; the conflict wrapped up a bit too neatly, and the alien characters are roughly formed. I also sense a great story behind the warrior who menaces Inotu (How did he become a cyborg? Why has he fled from his family? Who does he really work for?) and the history of the world itself (What kind of civilization created the advanced technology that now lies in ruins? Were they possibly intergalactic travelers of a different sort?).

The book’s final image shows us Boetema and Lindu floating in a sea of stars, reaching for each other’s hands across a vast but (thanks to their shared power) surmountable distance. Because only one spirit can inhabit a body at a time, they never actually meet each other in the narrative. I hope they meet someday. I hope Inotu is able to visit the old friend he misses throughout his journey. I hope their parents return. I hope we see them – all of them – in del Duca and Seaton’s capable hands again.