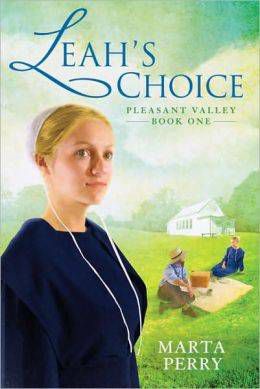 In my one short year as a bookseller, I witnessed two trends: the rise of 50 Shades of Grey and the increasing demand for Amish fiction. I learned that the latter has several nicknames: “bonnet books” and “kapp lit” (kapps being the name for the white head coverings the Amish women wear) among them. I assumed the two trends were related, but on opposite ends of the spectrum–women wanted their own version of romance, but some want it with a dose of handcuffs and others want it with a dose of…hay baling?

In the interest of experimentation, I picked up three books from the Amish fiction genre. I selected the books from user-generated lists of “best Amish fiction” on Goodreads and ended up with The Shunning by Beverly Lewis, Plain Perfect by Beth Wiseman, and Leah’s Choice by Marta Perry (I specifically chose these three because they had some of the highest user ratings). Beyond being highly rated by readers, these three are all best-sellers, and not just in their genre. The Shunning has sold over one million copies. According to Salon, the new books of popular Amish fiction authors rarely sell less than 100,000 copies–and some of these authors can produce more than one new book every year. In the same article, an executive at a Christian publishing house says that putting a girl in a bonnet on the cover of a book is a sure-fire way to increase the book’s sales.

I find generalizations about why large numbers of women find a certain genre troubling (and women are the audience here, specifically politically conservative Christian women) because they are so often reductive or condescending, so I’m not going to theorize about why your grandmother or neighbor or even why you like Amish fiction. Besides, you can visit this Goodreads forum thread and the readers themselves will tell you why, their answers varying everywhere from “I like that there’s no swearing” to “I like how everyone helps their neighbors” to “my family was Amish/Mennonite/German/anabaptist and I’m curious about their traditions.” I will just share my own observations, loosely gathered. Preview warning: thar be spoilers, and also, I hated the books. So.

1. The Authors Are Not Amish. I guess this shouldn’t be surprising, since the Amish aren’t really into evangelizing or explaining themselves to the outside world, but I was still confused by how the books are accepted as sources of authority on Amish life even though the authors haven’t experienced it themselves. You can see that in the thread linked to above–so many readers like the books because they are curious about Amish life, and they trust that the fiction is factual. But I don’t necessarily accept “my grandmother was Mennonite” or “I grew up in Pennsylvania” as basis for authority about a religious culture. I’m not saying the books aren’t properly researched, but many Amish themselves find the books to be misrepresentative of their way of life (though the genre does have Amish fans).

2. Feminists, Beware. The characters in Amish fiction have traditional gender roles, and take the Biblical edicts about wives submitting to their husbands literally (again, not too shocked there). The wives cook, the men farm, the wives don’t talk back, the men make the final decisions. The surprising part was the evangelical way this is presented, especially in Plain Perfect. The main character is an outsider who moves in with her estranged Amish grandparents in search of a spiritual do-over. She falls in love with an Amish man and decides to become Amish, and the chapters dedicated to training her in their way of life have lots to say about the proper role of a woman in the world. Much is made of her decision to take off her tight jeans and put on the more “modest” Amish dresses. The MC voices a desire to have a marriage where both partners are equal, and is immediately shot down by her grandmother, a wise and kind matriarch whose every word in the book is presented as truth.

Plain Perfect presents the Amish way of life as peaceful, simple, preferable, and therefore the way the women are expected to behave is something peaceful, simple, preferable. In Leah’s Choice, the main character is an Amish school teacher who must explain herself to an Amish man when she is seen talking to a harmless English (Amish word for “not Amish” or “outsider”) man, even though the Amish man is a stranger. It’s presented as cute (he’s there to “protect” her with his manly manliness) but in reality, it’s disturbing, especially since these situations are presented as right and good by non-Amish authors. It’s evangelical Christian women writing about hyper-conservative gender roles, wrapping them in a quaint Amish quilt and giving them to other evangelical Christian readers as a yardstick.

3. These Are Some Whitey-McWhite-White Books. In the three books I read, there was not a single character that was a person of color. I get that the Amish population is mostly European, but even in their interactions with English tourists and townies, there were no non-white characters. Is everyone in Pennsylvania white? Do people of color not want to buy Amish quilts? The three authors are also white; in fact, after searching through lists and lists of Amish fiction authors, I couldn’t find any who aren’t white.

4. They’re Formulaic. Temptation of the outside world + a male love interest with “blueberry eyes”+ generic tastes of country life = my experience with this genre. The part I was really interested in–the taste of country life part–was really unsatisfying. The descriptions of the cooking/quilting/farming are super-shallow (I’m talking not even as in-depth as Little House on the Prairie shallow). In fact, I wouldn’t even call the portrayal of the details of Amish life “descriptive.” The details are presented as occurring (“the women went to a quilting frolic” or “the men stood around and then had a barn-raising, the women prepared the food”) but there’s no meat behind the writing. I know just as little about the nuances of daily Amish life as I did before. There are farms. There are barns. Women cook stuff. The end. I want to know what if feels like to cook over a stove in July without air conditioning. I want to know what it feels like to get a splinter during a barn raising. I want to know what calluses you would develop after quilting for hours and hours. The language of the books is uninteresting. The writing is uninteresting. The dialogue is manipulated so the author can insert as many Pennsylvania Dutch words as possible. If you like your books challenging or beautifully written, you won’t find that here.

5. They Have an Agenda. This is Christian fiction published by Christian houses, so I went in expecting there to be a Message, capital M. But I’ve read non-Amish popular Christian fiction and the message there is usually of the accept-Jesus-into-your-heart variety. But the agenda in the Amish fiction I read is less about spirituality and more about what it looks like: THIS is how a truly unified family behaves. THIS is what a properly submissive woman and properly obedient children look like. THIS is how you act toward your neighbors in order to foster a sense of community. The books that I read, without exception, simplified the Amish (who certainly have complex, heart-breaking problems of their own despite their portrayal here), put them on a pedestal, and present them as a kind of early-New Testament picture of a communal Christian way of life. The books aren’t suggesting that we all pick up and become Amish, but they’re certainly suggesting that Christian women (the audience for the genre) can learn a thing or two from them.