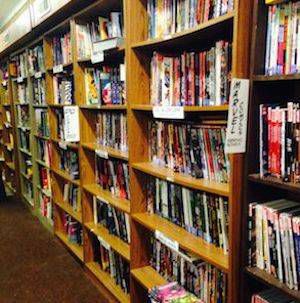 I can’t name you all the members of the Avengers. I don’t know the difference between DC and Marvel. My experience with reading graphic novels/comics is entirely limited to that one time my husband made me read Watchmen. I don’t say any of this in the way some people say, “Oh I NEVER watch television/have time to read books” as if ignorance of a form of art makes one superior–I say this so you know the lengths and depths and breadths of my complete and total newb-ness.

Dive right in, I guess?

It was with this newb-ness intact that I decided to venture into my town’s closest comic shop (closest to me, anyway- we actually have more comic shops in Richmond than we have frontlist-selling independent bookstores). I had up unto this point ignored comics as a form because I just didn’t know where to start. With the 4 millionth issue of Wolverine or Batman or the Wolverine/Batman crossover (is that a thing?) and do I have to start at issue number one in order to not be totally lost and uggghhh whatever I’m just going to go read a regular book, this is so confusing. Etc.

Then everyone started talking about Saga– and I mean everyone. Fellow Rioters, BookTubers I follow, book bloggers I read who had never talked about graphic novels before. I heard the words “space opera” and saw a brown woman (and MOTHER) on the cover and thought: I could start here. It’s Volume One, after all. I called the comic shop to see if they had it and a woman answered the phone, immediately putting down another reason I hadn’t gotten much into comics: it seems like a dude-fest, one that likes to put women in back-breaking positions so their boobs look nice, one that mocks and denigrates women who enjoy comics. Ya know, “fake geek girls” and all that mess. I’m not in the community, but I’ve heard enough about it to make me wary of ever entering a comic store.

Verdict: it was very pleasant! The lady behind the counter was welcoming and had purple hair (and I’ve since been back and was helped by a different lady, comic ladies all over the place, hooray) and she didn’t quiz me or ask to see my Official Comic Reader badge or anything. She just…left me alone. Which was both nice because I could wander at my leisure, and not so great because I had no idea where anything was. The graphic novels were all arranged by publisher, then alphabetical by title instead of author (a thing this bookstore-goer is not used to). That left me wandering the store using my phone to find out who published Saga and Fables and The Sandman, hoping the clerk didn’t think I was One Of Those People who look up prices on Amazon and go home and buy them from there later. I totally figured out that graphic novel section, though. I am Queen Of The Graphic Novel Section.

And yet, I still don’t really know how the comics-proper areas work. They comics are in giant boxes in the middle of all the rooms (see first image above), stacked on tables and under tables and on shelving in WHAT I THINK is publisher–>title order, but since I’m so unfamiliar with comics I don’t really know if that’s accurate. I still don’t know what a trade is. I had to ask Twitter if I was supposed to keep the plastic sleeves the stuff I bought came in.

Comic shops should offer guided tours for new people, is what I’m saying. With a side-hustle of Tell Me What Books/TV/Movies You Like And We’ll Tell You What Comic Books To Start With, And Which Volumes, And Where To Go From There. I would take that nerdy class with a quickness.

Or maybe I’ll just ask the nice lady clerk for help next time I go (which will be soon because I need the next volume of Fables). I look forward to finally finding out Wonder Woman’s backstory, and why Thor has that big hammer thing, and if Tony Stark is really as saucy as Robert Downey, Jr. plays him.