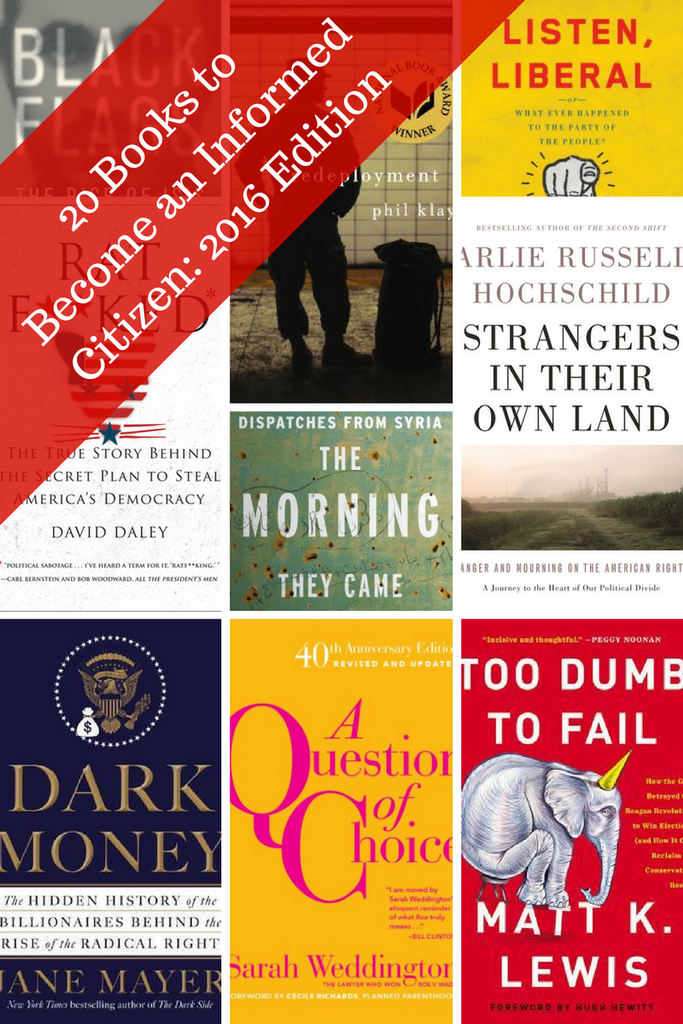 Four years ago, I wrote a post in advance of the presidential election that, in many ways, is both still relevant and widely outdated. We’re facing what could likely be the most significant election in most of our lifetimes that will have the most wide-reaching and potentially long-lasting consequences. Some of my previous suggestions are still relevant (see: The Handmaid’s Tale, What’s the Matter with Kansas, A People’s History of the United States, etc.).

But the American landscape had changed dramatically in the last four years, and the issues we face, that are most contentious between the Clinton and Trump campaigns, are not only complicated, they’re fundamental aspects of American citizenship. If you’re looking for some primers to get up to date before you head to the polls on Nov. 8th, this updated list will help you out.

1. Big Girls Don’t Cry: The Election that Changed Everything for American Women by Rebecca Traister. Even though it was written after the 2008 election, Traister’s examination of feminism and sexism in the midst of Hillary’s first presidential run is all the more relevant now. Take the revelations in it and multiply them.

2. Dark Money: The Hidden History of the Billionaires Behind the Rise of the Radical Right by Jane Meyer. The Koch brothers are one of the most powerful forces in American politics, and with the passage of Citizens United, a bill that allows for previously illegal sums in political contributions that open the doors of influence, the red carpet was rolled out. With Clinton vowing to repeal it and Trump enjoying its spoils, this examination is required reading if you want to understand the economics behind our political system — and why Trump likely hasn’t paid federal taxes in 18 years.

3. America’s Bitter Pill: Money, Politics, Back-Room Deals, and the Fight to Fix Our Broken Healthcare System by Steven Brill. In the wake of Obamacare, Brill’s look at the political fight for its passage is great background when looking at possible futures of healthcare under either a Clinton presidency or a Trump presidency and understanding why it matters.

4. Ratf**ked: The True Story Behind the Secret Plan to Steal America’s Democracy by David Daley. You might think that voting rights are a thing of the past, a remnant of 1960s Civil Rights era politics, but in the wake of President Obama’s 2008 election, Right Wing politicians scrambled to keep hold of an electoral map that is as red as possible, using –among other things — Citizens United to do so. The consequences of their underhanded tricks will be on full display in November.

5. Black Flags: The Rise of ISIS by Joby Warrick. This Pulitzer Prize-winning look at the most prominent Middle Eastern terrorist group is told with the gripping narrative usually reserved for thrillers and mystery novels. Tracing the origins of ISIS (which includes two unwitting US presidents), Warrick paints a picture of our world’s most dangerous extremist threat.

6. Hillbilly Elegy: A Memoir of a Family and Culture in Crisis by J.D. Vance. Part memoir, part social analysis, Vance examines poor rural America in the lens of his own Appalachian family. His family history reveals — along with sociological studies — the changing idea of the American dream and the shifted definition of the middle class. A personal and deeply moving look at the struggles of America’s white working class.

7. Strangers in Their Own Land: Anger and Mourning on the American Right by Arlie Russell Hochschild. Addressing the ever-widening gap between the Right and the Left, Hochschild examines a movement (the Tea Party), a state (Louisiana), and an issue (environmental pollution) to reveal the heart of American conservatives and open a door, particularly to liberals who do not understand what’s happening in the hearts of the country’s right wing voters. Empathy, she argues, is key to closing that gap.

8. Between the World and Me by Ta-Nehisi Coates. Perhaps one of the most politically divisive movements of the last few years is #BlackLivesMatter, and nowhere else is the root of racism in America better articulated than in Coates’ award-winning cultural critique. If you are looking for one book to read before the election, make it this one.

9. Asking for It: The Alarming Rise of Rape Culture and What We Can Do about It by Kate Harding. The term “rape culture” has finally entered the mainstream lexicon, but, Harding argues, the system still supports the accused over the accuser. With her no bullshit take, she examines rape culture, what that means in our modern political landscape, and how we can work to dismantle the system in which only 5 of 100 rapes results in a felony conviction.

10. The Morning They Came for Us: Dispatches from Syria by Janine Di Giovanni. The civil war in Syria is at the heart of many issues in this political season: refugees, isolationism vs. interventionism, jihadism, etc. This intensely personal account of the author’s last four years in Syria as the country underwent revolution and then utter devastation is a heartbreaking testimony to human resilience.

11. The New Jim Crow: Mass Incarceration in the Age of Colorblindness by Michelle Alexander. Former litigator Alexander scrutinizes the US criminal justice system, which operates ostensibly as a “colorblind” institution but which actually decimates communities — particularly men — of color. Also relevant is Alexander’s explanation how the modern Republican party built its base.

12. Listen, Liberal: Or, What Ever Happened to the Party of the People? by Thomas Frank. His iconic political treatise, What’s the Matter with Kansas, made the last version of this list, but his unflinching examination of the Democratic Party is especially important in an election in which “blaming the stupidity of Republicans” is an easy answer for the rise of liberals. Its not that simple, Frank argues, and his extensive research into the ways in which modern Democrats are failing to fulfill the philosophical goals of the party is delivered with his trademark sardonic wit.

13. Too Dumb to Fail: How the GOP Went from the Party of Reagan to the Party of Trump by Matt K. Lewis. Then again, the party of Trump really may be the downfall of the Republican party, whether the Democrats help it along or not. Lewis – a young leader of the conservative movement – traces the GOP’s history and posits an argument to save the modern Republican party from falling into anarchy.

14. The Court and the World: American Law and the New Global Realities by Stephen Breyer. Who better to explain the role of the Court in today’s modern world than Associate Justice of the Supreme Court Stephen Breyer? And why should you care? Because the next president will choose at least two, possibly three or more justices, which will have so great an impact on the future of not only the country but the world that the scope is close to unimaginable. Justice Breyers examination takes the smallness of the world and the court’s crucial role within it into consideration in this timely and necessary book.

15. A Question of Choice: Roe v. Wade 40th Anniversary Edition by Sarah Weddington. Originally published for the 20th anniversary of Roe v. Wade by the lawyer who argued the case in front of the Supreme Court, this updated version includes a new chapter about the current state of women’s health in the political sphere. Just as Breyer’s book above provides a good overall view of where we stand with SCOTUS, Weddington’s book shows us exactly what’s at stake.

16. The Fire This Time edited by Jesmyn Ward. Inspired by James Baldwin’s landmark book about race The Fire Next Time, Ward gathers 18 pieces from landmark writers who examine race in 21st century America, answering questions about whether we live in a “post-racial” world or whether people of color are any better or worse off than they were 50+ plus years ago, since Baldwin’s original essay was published. It’s a stirring collection, full of original and powerful voices.

17. The Book of Unknown Americans by Cristina Henriquez. Examining immigration into America can certainly be done in nonfiction, but capturing the immigrant experience is best done in fiction, which is what Henriquez has done and brilliantly so. Through a love story between a Panamanian boy and a Mexican girl, readers are asked to examine not only their own definitions of what it means to be an American, but the idea that more than one definition exists.

18. Redeployment by Phil Klay. Winner of the National Book Award, Klay’s collection of short stories examines our ongoing wars and the people directly impacted by them: soldiers and their families. As the characters come to terms with not only the things they seen and done, Klay’s moving and brutal language slams home the point that no one makes it out unscathed.

19. Citizen: An American Lyric by Claudia Rankine. Of course a book called “Citizen” is going on a list about citizenship. Rankine’s incredible volume of poetry addressing the everyday aggressions of racism in the US is a must-read, whether you’re a poetry fan or not.

20. Bitch Planet, Vol. 1 by Kelly Sue DeConnick and Valentine De Landro. Listen, I won’t pretend that I’m not terrified of an actual dystopian future in which President Trump jails women for acts against the patriarchy. Prepare yourself for the possible coming gender wars, friends.