A Scandal in Bohemia is one of Sherlock Holmes’s most iconic cases. At the urging of a German king, Holmes tries to recover a compromising photograph from the king’s ex-lover, an American opera singer named Irene Adler, who supposedly is planning to blackmail him with it. Despite a valiant and creative effort, Holmes fails in his task when Adler outsmarts him. Turns out all she wanted to do was marry her lawyer boyfriend, not get revenge on some royal jerk. Holmes, flabbergasted by his defeat, forever after refers to Adler by the reverent appellation “the woman.” 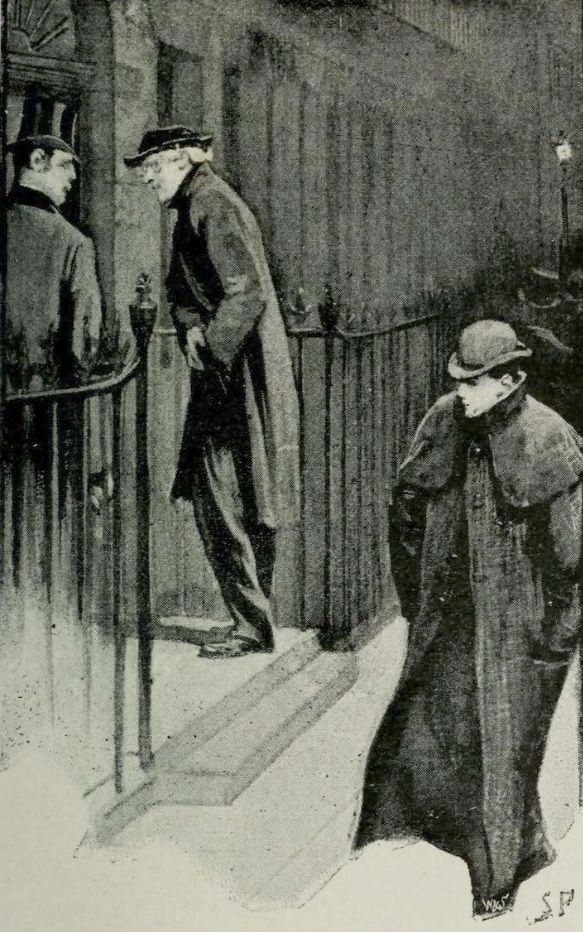 It’s a darn good story, in no small part because it features the hero losing. To a woman! In 1891! Unfortunately, a lot of adaptations—and Irene Adler, despite only showing up this one time, is very popular with adaptations—don’t seem to like that. Not only do they change her story so that she loses to Holmes in the end (usually by making her a criminal instead of a harassed woman who just wants to marry in peace), they often chuck her beloved husband, Godfrey Norton, out the door and have her and Holmes fall in love.

I hesitate to say that these interpretations are “wrong.” Yes, Watson does say that Holmes was not in love with Adler. But not everything Watson wrote was strictly true. In The Resident Patient, he admits that he “mislaid” some of his notes on the case, so he’s fuzzy on some things. In at least three stories—Charles Augustus Milverton, The Three Students, and The Second Stain—he specifically says he left out key details to protect the innocents involved. On other occasions, Watson talks about having to wait several years before he could publish a story, and cherry-picking which cases to write about based on whether or not they make Holmes look good.

It is therefore perfectly logical for fans and filmmakers alike to make changes to the source material. Watson already did so himself, so who knows what “really” happened or what these characters were “really” like? (The 2013 Russian miniseries Sherlock Holmes does this explicitly, having Holmes ask Watson to never write about Irene Adler after she is [spoilered] by [spoiler].)

But these changes in particular—depicting Adler as a criminal in love with Holmes—do seem to miss the point of the original story. A Holmes/Adler romance drags Holmes’s feelings for her out of the realm of platonic admiration and into clichéd heterosexual attraction. Men who admire women they’re attracted to are a dime a dozen in media; men who admire women purely because the woman outwitted them, not so much. And making Adler a thief or a serial blackmailer means she’s a bad guy, and bad guys have to lose, thus wiping away her one claim to fame: her victory over Sherlock Holmes. Without that, is she really Irene Adler?

Thankfully, there are some adaptations that leave well enough alone and depict the notorious Mrs. Norton as she deserves: goodhearted, honorable, and triumphant. Here are some neat ones, in chronological order!

The New Adventures of Sherlock Holmes (1945)

Basil Rathbone and Nigel Bruce, that most iconic of duos, adapted A Scandal in Bohemia for radio in 1945. The show didn’t bother to credit anyone besides Rathbone, Bruce, and the dude shilling for their sponsor (buy Petri wine, y’all!), so I don’t know for sure who plays Adler. The audio I found includes an intro from radio actress Peggy Webber, who says she worked with Rathbone several times, so I’m making an educated guess that it’s her.

Rathbone sounds really bored, which isn’t surprising. He was thoroughly sick of playing Holmes by this time; in fact, he left the show the next year. He does manage a modicum of enthusiasm when he fanboys over Adler’s victory, which is a nice touch. The show is narrated by Watson, who wasn’t around during Adler’s pivotal scenes. And since this version doesn’t expand on the source material as future versions will, she barely gets any lines.

Adler being a non-character may grate against modern assumptions, which have been primed by virtually every other adaptation to expect a larger role for our lady of “dubious and questionable memory.” However, this is actually consistent with the source material, where Adler is frequently discussed but seldom appears in person. This adaptation’s biggest crime, therefore, is cutting the scene where Adler puts on men’s clothes and tracks Holmes to his house. Boo.

The Adventures of Sherlock Holmes and Dr. Watson (1983) 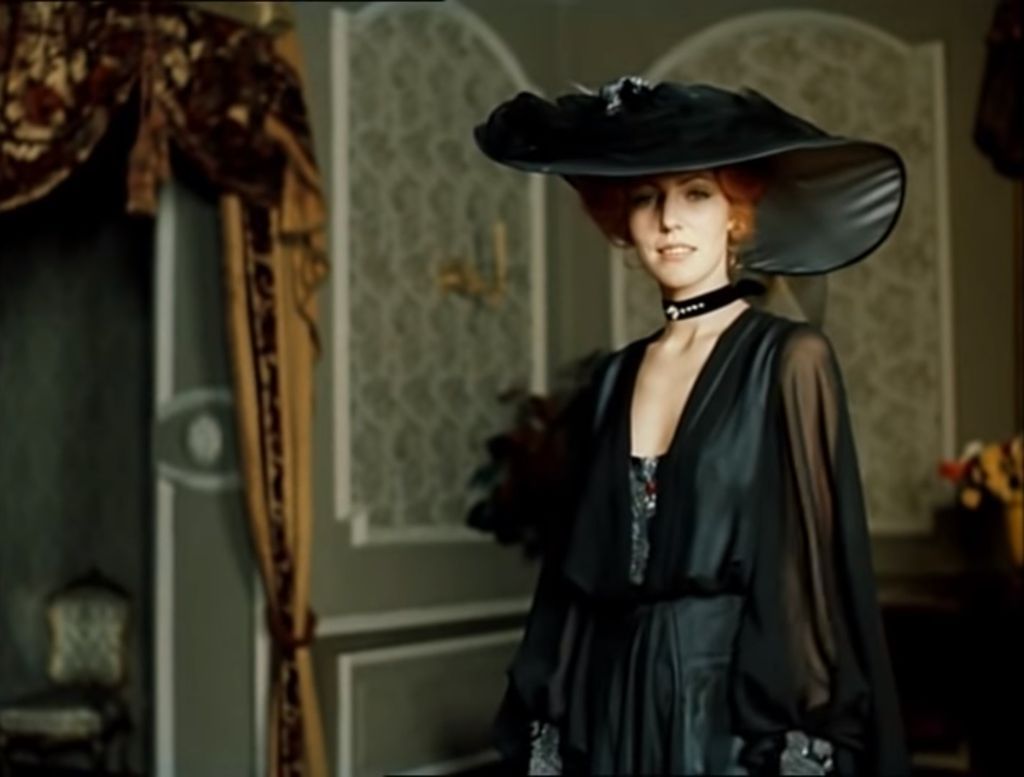 Produced for Soviet television from 1979 to 1986, this series of TV movies is a bonafide classic. It’s got amazing acting, gorgeous sets, an unforgettable theme song, and Watson in tweed.

The interesting thing about this Scandal adaptation is that it is folded into the episode “The Agra Treasure” via flashback. This episode is their adaptation of The Sign of the Four, in which Watson gets engaged against a cynical Holmes’s wishes. This would indicate that the creators are trying to draw parallels—in other words, that they have added a romantic angle to Scandal to explain why Holmes is so down on marriage and love in general. And you certainly could interpret it that way…on Holmes’s side. Adler, played by Larisa Solovyova, does not care one iota about Holmes except insofar as he is bugging her and needs to shove off. Still annoying, but I’ve seen way worse.

While this Adler gets more to do than the 1945 version, a lot of her screen time is taken up by romanticized slow motion rather than actual characterization. But unlike the 1945 version, they keep a version of the crossdressing scene, preserving her cleverness and inventiveness as well as her triumph.

The Adventures of Sherlock Holmes (“The Granada Series”) (1984) 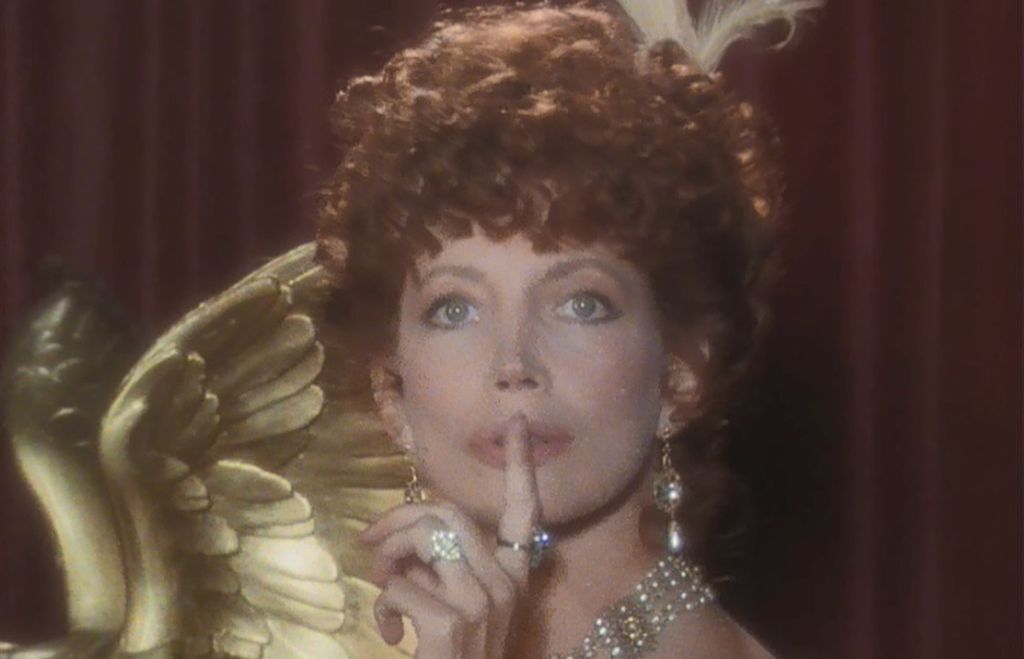 This is a very highly regarded series, in large part for its faithfulness to the original stories. So it’s not surprising that their version of A Scandal in Bohemia is one of the strongest out there. This episode actually served as Granada’s pilot, and they really hit the ground running.

Gayle Hunnicutt’s Irene Adler is exactly the steely badass that would attract a king’s attention. When burglars invade her home, she shows them the door with a gun, only displaying fear when they’re gone. But no matter the circumstances—whether she is performing impromptu equestrian tricks or attending a cabaret in drag—she is the epitome of elegance and grace.

The Adventures of Sherlock Holmes (1990)

The stars of this radio show, Clive Merrison and Michael Williams, were the first Holmes/Watson duo to adapt all of the original stories. I can’t think of a more deserving pair: their chemistry is incomparable. Writer Bert Coules wasn’t afraid to embellish and expand on the source material, often to great effect, as seen—well, heard—in A Scandal in Bohemia.

When we first meet Sarah Badel’s Irene Adler, she’s spitting in the face of two thugs who have been sent to find the picture. That sets the stage for the rest of her performance. She is boisterous and fearless; kisses the king while dressed as a man for funsies; and makes a habit of beating men at everything. She loves life and lives it how she sees fit, societal norms be hanged. 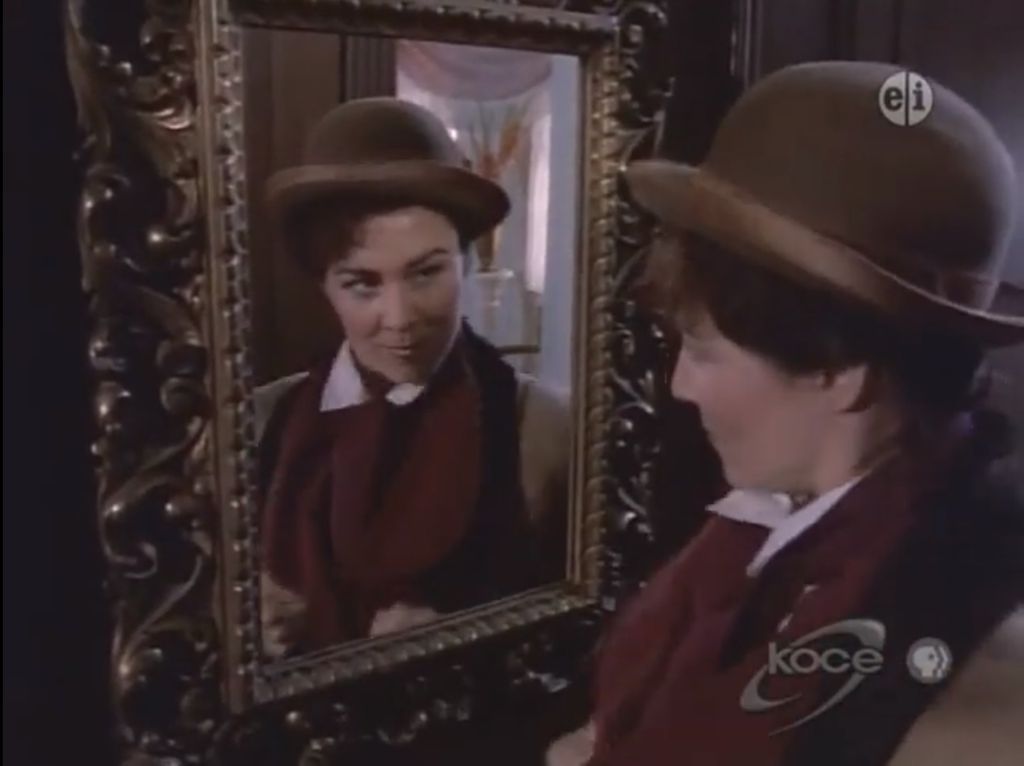 This is the first version of A Scandal of Bohemia I ever saw (not that I remember watching it back then). Wishbone, a 1990s kids’ show about a book-loving Jack Russell terrier, adapted almost 50 classic books, all with the title dog in the starring role. It is even more awesome than it sounds.

Sally Nystuen Vahle portrays Irene Adler opposite Wishbone’s Sherlock Holmes in the episode “A Dogged Exposé.” It’s a solid performance. She hits all the notes she has to hit—it’s not like they had time for anything revolutionary, though the story isn’t “kiddified” at all. This is a fun and faithful adaptation (it cuts less than the Soviet version!), despite the fact that Holmes is played by a dog in a deerstalker. Actually, I think that makes it better than the source material.

Did I miss your favorite faithful A Scandal in Bohemia adaptations? Let me know on Twitter! I’m always up for some crossdressing Victorians!