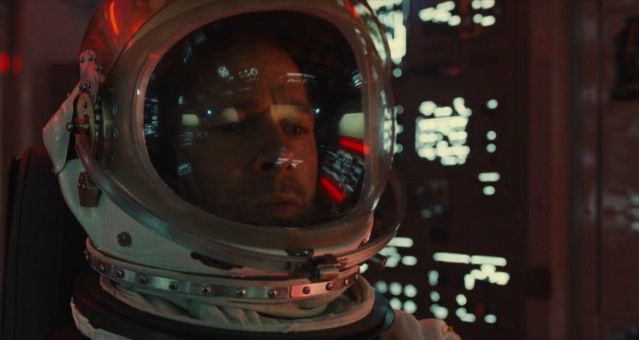 Warning: spoilers ahead (the horror, the horror)

In the 2011s, rumors of a Heart of Darkness film set in deep space made their way across the internet. I missed them, but then: I’m not someone who spends much time pining after Joseph Conrad adaptations. Regardless, that movie recently arrived in theaters, in the form of Brad Pitt’s much anticipated, Oscar-buzzy Ad Astra.

Conrad’s story of Marlow’s excursion up the Congo in search of Kurtz, though adapted time and again (in Apocalypse Now; in Pixar’s Up), is forever impeded by its colonialist language and sensibilities. Once lauded as a criticism of imperialism, contemporary scholars are more wont to uphold it instead as an example of colonialism: its treatment of indigenous people, its positioning of white explorers as at all heroic, moor it in the realm of irredeemable narratives. You can read an excellent New York Times piece’s troubling interpretations of it, as well as Chinua Achebe’s scorching takedown of the novel.

Heart of Darkness romanticizes the jungle; positions outside, entitled explorers who exploit its resources as protagonists; assumes no ownership over the jungle’s resources on the part of those native to it; and renders its inhabitants curiosities at best and brutes deserving of murder at worst, but never fully human. These are the sorts of illustrations that make modern stomachs turn, whatever Conrad’s own intent.

Nevertheless, Francis Ford Coppola played with the narrative to comment on the U.S.’s presence (and proclivity toward atrocities) in Vietnam in Apocalypse Now; today, James Gray and Ethan Gross’s take launches Kurtz into space, doing terrestrial exploration one better. Its leads are on a mission to find intelligent life, never mind that we haven’t yet learned to respect one another on Earth.

The movie reframes Kurtz’s/NASA hero Clifford McBride’s seeker as his son, Roy McBride. Roy, filling the Marlow role in a more personal way, is an emotionally shut-off astronaut who’s ambivalent about how well he’s followed in his father’s footsteps, down to not connecting with other human beings and alienating his beloved wife, played by Liv Tyler. (Women, in Ad Astra as in Conrad, scarcely have a voice or any autonomy; they are acted upon by bad, at best inattentive, men.)

In one of the movie’s most powerful scenes, Roy speaks about his inherited inner rage—a fury, he says, that belies deep pain and loneliness. As the film progresses, learning to form that fury into something more worthy and productive—something not tamped down, but dealt with—becomes central to Roy’s personal quest. In Ad Astra, compartmentalization may save your life, but it leaves you wanting.

Roy is sympathetic in some senses but infuriating in others, particularly because nothing seems to shake him: not the power surges that knock him from the sky and nearly claim his life, and that end up leading to massive global death tolls; not vicious Mandrills, their snouts covered in blood, taking down his ship’s captain after his crew answers a distress call in space; not an attack by pirates on the dark side of the moon. No matter the circumstances, Roy’s heart rate never goes above 58; it’s a point of pride.

(Writing this, the parallels between Ad Astra and Heart of Darkness are becoming clearer and more cringe-inducing to me, but as we watched the film, it took my boyfriend’s early insight to reveal that Gray’s movie was—in how it was framed, in its narration, in its use of music, in the story it was telling—an updated version of Apocalypse Now, and therefore rooted in Conrad’s book. This sourcing becomes its folly; whatever it might have accomplished otherwise is undone by the Conrad connection.)

When the aforementioned power surges are attributed to a burst from the edge of the solar system, Roy is tapped upon to undertake a mission to determine their source and neutralize them for humanity’s sake. NASA suspects that Roy’s father—long positioned as an agency hero and thought to be lost in space—has gone rogue and is manipulating the antimatter that powers his ship to cause them. Roy is sent first to the moon and then to Mars to make an emotional appeal to his father. When this fails, he requisitions a ship (and some nukes) and goes after his once lauded, now-tarnished father himself, determined to set things right and save all of humanity.

Ad Astra works to better its source material, sometimes with success.  Instead of centering resource-mining capitalists as protagonists, it criticizes capitalism at every turn: there are Subway sandwich shops and Dunkin’ Donuts locations on the moon, it costs $125 to acquire a blanket and a pillow when you’re flying there commercial, and every poor human impulse, Roy observes, has simply been transferred to the lunar and Martian surfaces. There are wars over territory and senseless deaths galore.

By the time Roy heads off to find his father, the audience isn’t sure that human beings have much to offer alien species if they are located; that, at least, is a reversal on Conrad’s text. So too is it worth noting that the movie prioritizes treating people with love and respect as a message over anything overtly colonialist or greedy.

But it’s still Conrad. In Ad Astra, instead of belittling, dehumanizing, and murdering “natives” in the dark beyond, the explorers find no extraterrestrial life; therefore, instead of dealing with how we treat other life forms, the film determines (as Roy says) that all we’ve got is us. But removing “the natives” (in this case, alien species) from the conversation simply skirts the issue. We already have hints of what humans will do, validated by Roy’s own observations: they will pillage, they will use, they will shoot, they will destroy. It’s almost a relief when Roy’s father’s 30 years of celestial images reveal no movement on any planetary surface, no sign of life, no hope of securing that meeting: humans are alone. Alone, they can’t take the destruction and exploitation of life beyond earthly bounds. Our damage is mitigated by still planetary surfaces alone.

This relieved revelation is a huge disappointment. It allows the film, NASA, human beings, and explorers everywhere to wiggle around ethical questions and looming universal conversations. Roy concludes that all we’ve got is each other, but in his wake are bodies, a legacy of terrestrial destruction, and war: we may be all we have, but we sure aren’t honoring that symbiosis.

By the time the film ended, I wished that my lovely and brilliant boyfriend hadn’t noticed the connection. Once you know the film is a take on Conrad’s book, everything about it becomes more troubling. It’s no longer just a deep space excursion story, playing on a rocky father-son bond and universal issues of belonging; its frames aren’t just beautiful images of space and the outer planets. Everything is commentary, and it’s not necessarily (or ever) commentary that’s comfortable or redemptive.

Though enchanted by the filmography and Roy’s ultimate personal decisions, I left the theater as ambivalent as the lead himself. Deep space exploration films carry inherent appeal, but it’s lazy to let them evade the questions that make Heart of Darkness such a point of contention—namely, how do we interact with other people (or, in the case of space exploration, extraterrestrial beings) well—respectfully, nobly, in a way that both speaks to our own exploratory goals and rejects hubris, thievery, dehumanization, and murder? How do we go about the business of being decent humans once other beings are involved? This is a central philosophical question that speaks to the core of human values and moral worth, and it’s a question that Ad Astra refuses to answer. That omission leaves the film at a loss and leaves its source material unredeemed.