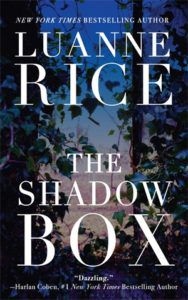 Artist Claire Beaudry Chase is preparing her latest shadow box exhibit, and one shadow box will expose her well-connected husband Griffin for committing a violent crime 25 years prior. When she’s attacked in her coastal Connecticut home and left for dead, she’s sure Griffin and his supporters are behind the attack. Then, when an acquaintance is murdered, Claire must decide how much she’s willing to lose to take down her husband and the corrupt group of elites who will do anything to protect his interests and their own. Read the haunting new thriller from bestselling author Luanne Rice.

It feels like there’s not a lot to celebrate these days, but if there’s anything good about our current epoch, it may be how much more accepted — and how much easier — it is to be a total nerd about a really niche subject. There’s a subreddit for everything! Or a hashtag! Probably both! And maybe a snap…tok? I don’t know how those work, so I don’t know if they support niche communities or not. The point is, it’s probably never been a better time to be a weirdo.

I’m spoiled when it comes to libraries, because I have access to a robust one — I’m a graduate student at an R1 university, where, thankfully, hardworking librarians weather budget cuts creatively and with minimal disruption. Transferring from one citation manager to another when they stopped paying the subscription fee for the one I was using is an inconvenience I was happy to endure if it meant I could still, you know, do the research I needed for my dissertation.

I’m sad, though, that not many people know how useful the academic library can be for everyday delights, not just for finding Dusty Old Tomes. That’s great for students, of course, because work-life balance is important, but it’s also great for anybody who has access to a local college library via a spouse, parent, or, in the cases of many public universities, a one-time or annual fee for a library card (typically in the $50 to $200 range) and free access to the physical space and collection if you don’t want to pay for checkout privileges.

If you didn’t know, now you know — college libraries do collect some of the everyday books you want to read. Are they going to buy 57 copies of the new [Insert Bestselling Author Name Here] book the way your public library does, anticipating the huge demand and miles-long hold list? Doubtful. But do they collect contemporary poetry, prize-winning novels, small press gems in all genres, limited edition publications you’d never be able to afford? Probably, yeah.

Also, the larger the university, the more likely it is to extend well beyond a main library into subject libraries or special collections. If there’s a medical school, you can bet there’s a health sciences library. Prestigious music program? Well, if you’ve been looking for some obscure pieces to play on the oboe you haven’t touched since 8th grade, you’ll probably be able to find some cool scores at the music or fine arts library on campus. Famous alum? They might have donated their archives to their alma mater.

Bowling Green State University in Ohio has a gigantic collection of comic books and graphic novels that even Comic Book Guy would be impressed with.

Totally done with Pinterest but love cooking? The entire history of Gourmet magazine is maybe the least impressive part of NYU’s Marion Nestle Food Studies Collection. At least it’s the least old — their collection dates all the way back to the 19th century.

Zines have been radical and boundary-pushing for decades, but once a zine is photocopied and sent out, you’re not likely to be able to track down a copy ever again, especially not years later. They’re not exactly registered with the Library of Congress or sold on Amazon. They may, however, be cataloged at Barnard College.

The cool thing about libraries, librarians, and institutions of higher learning is that absolutely everything under the sun is interesting to librarians, which means the thing you are interested in is supported, studied, and collected in some way, somewhere.

That’s All Well And Good, But There’s A Pandemic On!

Okay, so a lot of the libraries I just told you about aren’t open to in-person visits right now. This is an absolutely valid and good decision for administrators to make — library workers’ lives are not, however stressed out students may feel, more important than people’s research. It does mean that a lot of the cool physical items in the collections are inaccessible to you, however.

HAS ANYONE TOLD YOU ABOUT REFEREED JOURNALS, BRO?

To a grad student or professor, few things are worse than finding out that somebody has already researched your topic to death or come up with an identical hypothesis and already proved it wrong. But we must all grudgingly admit that we are likely not the first person to have ever thought about this or that thing, and it’s in the approach and the direction we take with The Thing that distinguishes us as scholars or practitioners. We come by this humility forcibly and reluctantly by doing our research and seeing what people have said before us, and the source of much of that research comes from refereed journals.

You may also know them as peer-reviewed journals. It means the same thing. A researcher or group of researchers does a thing; for example, an experiment, survey, or close reading of a text. Then they write it up (and they also cite previous researchers and studies in that write-up). Then they send it to an editor of a journal, who sends it along to two to four (usually) people in your field, who read it and decide whether it seems like a valid study or complete nonsense. There is a whole bunch of detail and melodrama and angst and ethical arguments here that I won’t get into, but in the end, you get monthly, quarterly, or annual magazines with titles like The Journal of Really Specific Studies About This One Thing or Annual Review of Very Broad Subject — So You Better Be Really Amazing If You Want to Publish It in Here.

These are not magazines you’ll see for sale at the grocery or bookstore, and you can’t just go online and buy the latest issue. They are published by massive corporations who own massive databases (also something I won’t get into) or by research societies or universities. The articles that make it in have been (nit)picked over, read and reread, edited, criticized, challenged, and, ultimately, commended for their quality and contribution to The Field™. And though they think they are just there for other researchers, I am here to tell you that they are for you, Everyday Nerd, as well!

Basically, a refereed journal in the humanities is a niche podcast, but on paper — or PDF.

Peer-reviewed journals are an undersung gem for nerds of all stripes. Think about whatever thing it is you are a particular fan or hobbyist of, and consider the last conversation you had (or wanted to have) about it, whether that’s in the form of a Twitter thread, dinner table talk, random conversation with a stranger while you waited in the dentist’s lobby (masked and 15 feet apart from each other, obviously), or asking questions to your cat, who is a terrible conversationalist. What are you itching to know about, or what do you wish more people were talking about? Maybe everybody in your immediate bubble is as familiar with your Thing as your cat is, so your only choice is to gush and squee with strangers. Guess what, buddy? People have written about it. Somewhere out there is another little weirdo, writing into the atmosphere, waiting for You to read what they have to say. Then you type some of those words into the academic library’s catalog search and see what comes up.

I’m serious. I may be the only person who’s going to admit it, but I see very little difference between the content of passionate, extended conversations at a booth at the back of a crowded bar and the content of a scholarly article, except tone of voice, volume, and expletives. At least in the humanities. If you’re not accustomed to being in school mode, it may take a little reframing of your brain (which your academic librarian can help you with! You! Even if you are not a student! Librarians are there to serve users of the library! No job title or degree required!) to learn how to come up with the right keywords to search, but when you do, the dorkiest part of you will be richly rewarded.

It’s called Which Of These Things Did I Hear People Say At A Party After Their Fifth Jägerbomb And Which Are Topics Of Articles In Fancy Shmancy Rags From The Ivory Tower?

“What’s the deal with soundtrack albums?“

“Is drinking the blood of animals instead of humans politically correct? Let’s talk about Buffy, Twilight, and True Blood.”

“Immigration is a hot mess.”

“Hear me out on this: what if I said there was a connection between Star Trek: The Next Generation and Louise Erdrich?“

“Are music competition shows even about music, or does the quality not even matter?”

“I’m so tired of talking about women losing their virginity in romance novels. Why don’t we see more people concerntrolling about male virginity?”

Surprise! All of those are Actual Articles. People like you sat around and thought about the stuff you also think about, and they wrote it down, and other people in their field liked it and published it. And trust me, they are not unreadable. The people who wrote those articles are not inherently better or smarter than you. It’s just that they chose a career where they get to write about that stuff, and you have some other cool career where you do other cool stuff, and it so happens that your hobby converges with their career thing. You’re basically making a new friend, not being lectured at.

As we get older and more self-conscious, we lose the hubris we had as preschoolers where we assumed all knowledge was ours for the taking and everything was within our capacity to learn. Put some of that attitude on and go read a peer-reviewed article about one of your favorite things. There may be some new vocabulary to contend with, formalities or formatting you’re not used to, or some references you’re not familiar with, but if it’s something you truly love to nerd out about, you’re going to love reading it anyway!

Your academic librarian is waiting to help you find it.