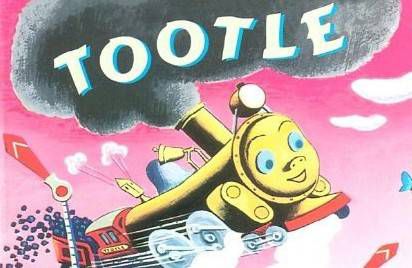 I’m sorry to have to tell you this, but Tootle, far from being a cute children’s book about a curious baby train, is actually virulent fascist propaganda. 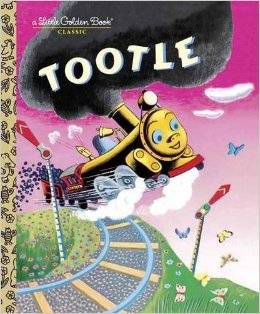 Now, my 3-year-olds are a little obsessed with it, and that’s fine. It’s pretty amazing that they’ll sit through such a relatively lengthy book right before bed. The content, though? Well, it’s really problematic, but if my husband and I were to try reading a different book while surreptitiously dropping Tootle into an industrial shredder, the twins would drop us into the industrial shredder instead so…

But seriously, people. According to the story, this baby train named “Tootle” goes to train school and takes classes in stopping for red flags, staying on the rails (NO MATTER WHAT), and all kinds of other things. But Tootle, being a curious, rambunctious creature, takes off-rail romps through meadows, racing horses, making daisy-chains, and generally having a helluva time. But the citizens of the town realize that Tootle is breaking the cardinal rule (staying on the rails) and they get together to teach him his lesson: i.e. do what you’re told and stay on the straight and narrow or we’ll make you cry.

So I ask you, what does that teach our children, hmm? First of all, there are no “baby” trains. I mean, how would that even work? Ok, maybe if we’re talking about organic machines or something, but Tootle is not that. And even if trains were self-aware, why and how would one jump off the rails to frolic in a field and then jump back on? It’s called GRAVITY, people. Trains can’t just hop and skip like they weigh nothing. Geez. This isn’t the f$#%ing moon.

But this whole thing about STAYING ON THE RAILS NO MATTER WHAT. So what if staying on the rails meant that Tootle would run over a poor damsel in distress who was tied to the tracks by an evildoer man in a bandanna? Hmmmm? Well, “no matter what” means no matter what. He can’t question, he can’t wonder, he can’t explore, he can’t develop his own unique worldview. NO. He must follow the path that others have marked out for him. Follow those orders, Tootle.

But it gets worse. At the end of the story, Tootle has not only internalized the rules, but he is now telling other trains to do the same thing. Get the kids while they’re young amirite?

Anyway, you can continue to read Tootle to your kids if you want, but understand that you’ll be warping their malleable little brains. You’ve been warned.

The Tale of Peter Rabbit