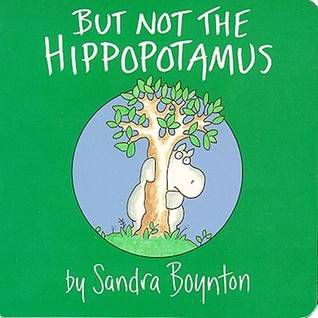 First, let me just clarify for those out there who might not understand that I’m being horribly, horribly facetious in posts like this, that I absolutely love Sandra Boynton because her books calmed my twins when they were crazy almost-toddlers– without fail.

But now, because it’s just so much fun and I really can’t help myself, I shall proceed to critically dissect and analyze Boyton’s classic But Not the Hippopotamus as if I were a stereotypical Dry Old Professor with absolutely no sense of humor. If I were this person, what would I write if someone asked me to produce a close-reading of this text? Well, you’re about to find out. 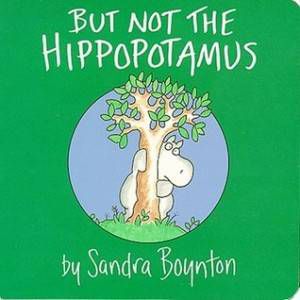 From what I can gather, But Not the Hippopotamus is a story about alienation and loneliness, made clear by the continual comparisons between animal groups and pairs, and the lone hippo. The animals are all doing their own thing, blissfully ignorant of the hippo and her existential angst, but when they do decide to ask her to join them (on a jog, of all things), she’s only too happy to comply. And then there’s the armadillo…

Ok, so first, who puts a conjunction at the beginning of their title? I mean, WHO.

Second, I’m really not understanding these animal pairings. Yes, yes, I get that rhyming is a key component in Boynton’s books, but a hog and a frog?! In a bog?! Do hogs and frogs even hang out in bogs? Like, aren’t bogs mostly in Ireland or something? Do hogs and frogs hang out a lot in Ireland? And why are the two creatures similar in size? Hogs are clearly larger than frogs, so this whole hog-and-frog-holding-hands-and-“cavorting” thing is unrealistic and even misleading.

And a cat and two rats? Really? I know cats like mice, but they like rats too, right? For eating purposes, I mean. Well, whatever, because the bigger issue is that they’re all trying on hats. Why. Why do a cat and two rats need hats? Cats HATE hats- just look at all of the costumes dogs wear on Halloween and how happy they look, and then try to find some pictures of cats looking happy in costumes. Cats hate wearing shit. I mean, they barely tolerate us humans even being on the Earth. So NO, a cat would not being hanging around in a hat store with a couple of sewer creatures deciding on hats. And anyway, do you even see traditional hat stores around anymore? Because last time I checked, it’s not the 1920s anymore. Ok, yes, there’s “Lids,” but that’s just baseball caps, and it looks like the cat and rats are trying on more generic headgear.

And then there’s the moose and the goose, and the bear and the hare. What even. I’m not going to repeat myself.

So after we’re introduced to all of these characters, suddenly they’re all running off somewhere together. Where? And since when did they all know each other? Like, in what ecosystem do hogs, frogs, cats, rats, moose, geese, bears, and hares all hang out partying and drinking cheap beer? And yes, I know they’re going for a “jog,” but animals don’t need exercise, because their whole lives are an exercise in staying alive (if they’re in the wild). And if these animals did go for a jog, they’d be picked up by animal control so fast their heads would spin.

ALL THROUGH THIS jogging and hat-wearing and juice-drinking and bog-dancing, we see the disconsolate hippo standing off to the side. She watches all of these creatures doing their respective thing, and it doesn’t occur to us until later to wonder why she is always watching these other animals. Is she some kind of stalker? Why is she hiding behind a tree at the bog, or sitting at a nearby table while the moose and goose or whatever are drinking their juice? She’s like this one kid who follows a clique, trying to find her in and never doing so. But the animals don’t even seem to notice her. Like, she’s truly invisible to them.

And hold on a second, but aren’t hippos supposed to be really mean? This hippo seems shy, awkward, and desperately in search of a friend. Do hippos even have friends? Aren’t they too busy submerging themselves in water and glaring? I know this isn’t a work of realism, but really.

So finally this animal group decides to ask the hippo to join them on their jog. But how do they even know that the hippo wants to hang out with them? Seems like they didn’t even know she existed. Or were they just pretending not to know that she existed? If that’s the case, I don’t know any hippo in her right mind who would agree to go on that jog.

Which brings me to the armadillo. The hippo runs off, and now the armadillo is left without anyone to hang out with. Which begs the question- are armadillos social animals? And if the hippo and the armadillo were both without friends before, then why weren’t they hanging out together? Or was this the case of two outcasts hating one another because they’re both outcasts? But when would an armadillo and a hippo even hang out together? Armadillos are land animals, aren’t they?

Ultimately, Boynton has seemingly tried and failed to write a book about angst, alienation, and loneliness because there are too many incongruous characters and hippos hanging out with frogs and animals in restaurants and things. Consistency, consistency and realism, would help in this case to make her narrative more appealing. Unless she was specifically trying to make us feel alienated from the text itself by making it so bizarre (if she were being meta, that would be cool). If that’s the case, then I’d like to dial back my harshness a little. But just a little.

Will this book make it into the cannon of Great Twentieth Century Literachahhhh? Hahhhrdly. Now let me go drink my tea and resew the patches on my corduroy jacket.