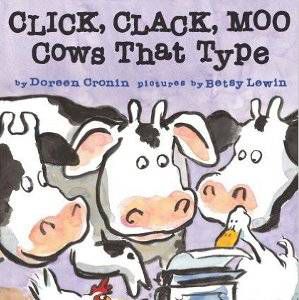 I recently took my kids for their yearly check-up and the pediatrician gave them each a new book: Click, Clack, Moo: Cows That Type and The Ant and the Big Bad Bully Goat. Of course, I was pleased. I mean, FREE BOOKS.

We took them home and I read them aloud to my boys. And wow the disappointment. I mean, Click, Clack, Moo, has so many problems. What a terrible book. I decided to write a critical analysis of it here on Book Riot to explain why I was so irritated by this supposed classic. 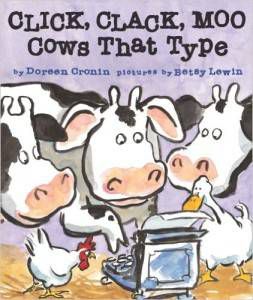 So, the basic story of Click, Clack, Moo is that some cows get a hold of a typewriter and write a note to their farmer-owner demanding electric blankets because they’re cold in the barn every night. The farmer’s all like “hells no” and the cows are like “fine then no milk for you, farmer-dude,” and then the chickens get in on it, and next thing you know, the cows and chickens have gone on strike and the ducks become mediators, and then the ducks start demanding shit and the farmer just caves because apparently this book is a thinly-veiled version of Orwell’s Animal Farm.

So the problems: first of all, why are the cows using a typewriter? I mean, CCM was written in 2000. Ever heard of computers, Ms. Cronin? Are you saying cows are too stupid to use computers, they can only figure out typewriters? And how, I ask you, are cows supposed to type at all? Hooves are not conducive to typing. I mean, that’s pretty obvious.

Second, since when do cows speak English? These notes that they write to the farmer are in English, but then at one point the cows are speaking “cow” to one another. So the cows are bilingual? When would they have had the time to learn a second language, since they are so busy eating grass and being milked?? And speaking English and writing English are two different things. Where did the cows learn to spell? Did they hire some sort of tutor to come by the barn every night to teach them? But who would want to teach cows how to read, write, and speak English? The pay couldn’t be that great.

Third, how do cows know what electric blankets are? Ok, I can see them understanding the concept of a “blanket,” but electric blankets aren’t really that common, plus they’re a fire hazard (so people say) and when would a cow have seen an electric blanket? Plus, where would they plug them in- I mean, the cows live in a barn. And those hooves are not good for turning the dial to adjust the heat. What if the cows burn themselves? And how many blankets do they need? If each cow wants a blanket, they’re going to have to get a pretty long power strip, and that’s also a fire hazard, with all of those blankets being plugged in and used at the same time. And would the blankets be used all night??

Fourth, why wouldn’t the cows negotiate a little with the farmer before cutting off his milk supply? I mean, the farmer has taken care of them for years, we can assume, and made sure that they were healthy and safe. Now, just because he won’t give them a bunch of expensive and dangerous blankets, they refuse to give him what they’re supposed to deliver? And I’d like to know just how long those cows would go without being milked before it would become uncomfortable. They’d need to be milked at some point, and who would do it if not the farmer. The chickens?

It seems like the farmer, the cows, and the chickens are all pretty keyed up from the beginning, and this electric blanket issue is just the straw that breaks the camel’s back, so to speak. It’s like they all just needed an excuse to argue. But why? What’s with this tension between man and beast? Why does cow literacy make the farmer so angry? Wouldn’t the milk be tastier and more plentiful if it came from happy, intelligent, thoughtful cows? Or is the farmer just unable to break out of his narrow worldview?

Well, these cows can’t be that stupid because they figure out a way to get the farmer to give them those blankets. Sorry, but I won’t tell you what the cows say because that would be a SPOILER.

And what’s with the ducks co-opting the whole argument between the farmer and the cows and chickens? The ducks were supposed to be the level-headed moderators, but then they jump into the fray and take advantage of the farmer’s fatigue over his negotiations with the cows and the chickens. Seems pretty unkind.

These are just some of the problems that I have with CCM, and I plan to discuss them with my kids. Who are 3. And who like to roar at anything that moves and use books as projectiles. Because I care about what my children read.