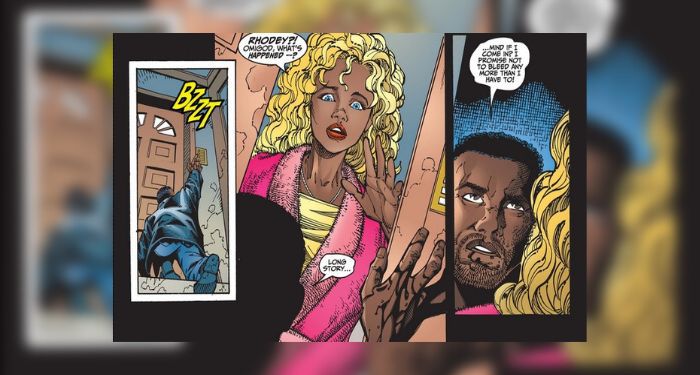 Even superheroes need friends! And, just like friendships in real life, some of those relationships last a lifetime and others fade away as you pursue your own destinies. In this series, I’ll be spotlighting some of the side characters who have been left by the wayside. Today we’re talking about Marvel’s Glenda Sandoval.

Glenda Sandoval and James “War Machine” Rhodes met as children. She is half Black and half Puerto Rican, which makes her the target of bullies at school and causes her relatives on both sides to treat her as lesser-than. So I guess it’s not surprising that she had to find some way to vent her frustrations. In one flashback, we see her frying ants with a magnifying glass in retaliation for their killing a caterpillar.

As an adult, she became a doctor and married an absolute dillweed by the name of Parnell Jacobs, an (ex-)friend of Rhodey’s who sold guns to extremely bad people. We don’t see their romance, so how they ended up together is a mystery, but if Glenda’s childhood was as neglectful and unpleasant as it seemed, I guess she never would have learned how to spot red flags in potential romantic partners.

In Glenda’s first appearances, in Iron Man #15, she was a very passive character, only serving to shelter Rhodey after he got beaten up near her home in England…

…and then trying to convince her no-good husband to stop being a supervillain — he was playing the role of a counterfeit War Machine for a business rival of Iron Man’s — and come work on their marriage like he promised. It didn’t go too well.

It wasn’t until 2008’s War Machine that Glenda got some real development as a character. Here, we learn she volunteered to put her medical skills to work in the war-torn nation of Aqiria, where she was soon kidnapped. Rhodey forced Parnell, under threat of death, to help him rescue her.

Despite suffering a head injury and sexual assault, Glenda proved herself more level-headed — and, arguably, more principled — than the men who stormed in, guns a-blazing, ready to murder as many people as necessary with no questions asked.

But, like I said, Glenda has/had a real vicious streak. This is made worse by the fact that her captors infected her with killer robot technology and, along with a bunch of other captives, set her loose on Aqiria’s capital city to infect the entire populace. She ended up shooting the man responsible for her torture in cold blood before Rhodey could stop her.

I really thought they were going somewhere with this — like, how much of Glenda’s actions when she was a robot-zombie were the result of the infection versus her own inner nature? Would she continue down an amoral or immoral path even after being cured?

Unfortunately, after being cured, Glenda’s role in the series ebbs. She joins Team War Machine as their medic, which means she is often seen in the background, tending to wounds suffered by those with powers and/or gun-laden armor. She is clearly still a badass — she grabs a gun and shoots at Norman Osborn’s men when they try to attack the team — but these moments are few and far between.

I’m not saying she should have been given powers or a suit of armor. Given how she behaved when she did have powers, she might not have wanted them anyway. Still, there’s no reason we couldn’t have had a quiet moment between her and Rhodey, her husband, and/or the rest of the team.

There really is a lot about Glenda and her past that remains unexplored. For instance:

Rhodey’s mother apparently doesn’t like Glenda. Is it just because of the ant genocide, or is there something else?

Both Rhodey and Glenda are frequently compelled to protect each other, presumably because they had so few others they could rely on throughout their childhoods. How far is each willing to go when it comes to overlooking the others’ less savory traits?

Glenda clearly wants to help people with her medical skills. Did her more altruistic nature overcome her childhood bitterness, or does it still bubble beneath the surface, waiting for an outlet like the robot virus to be set free?

Or maybe she grew out of her ant-murdering tendencies and is now a perfectly well-adjusted adult. She did seem genuinely horrified by her actions once cured of the infection. We don’t know the answer to this because Glenda has never had the chance to be a character in her own right. She is always a tool that someone else uses to get what they want, and then once her role is finished, she disappears. That’s pretty disappointing, as there is a lot of material left to mine here if Marvel wanted to. I for one would be very interested!