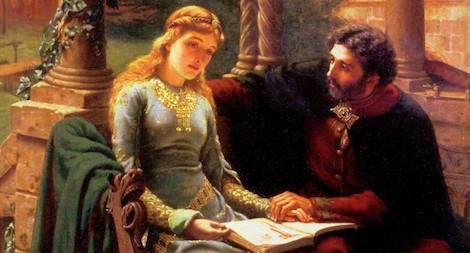 I am not a very romantic person at all. On the Myers-Briggs test, I get INTJ every time. I tend to identify with the Vulcans and the Borg more than with the Klingons or Romulans, the Cristina Yangs more than the Izzie Stevenses. All the touchy feels make me twitch. I go for logic and facts in an argument over feelings. Maybe I’m broken, but I’m too busy reading to care much.

But! I’m an absolute sucker for the story of Abelard and Heloise. I don’t know if it’s just because I am a medievalist by degree and their story is a medieval soap opera; or if they are just fascinating in any time period; or if, gods forbid, I am more romantic than I realized. I always found their tale to be utterly compelling, so heartbreaking and alluring. They had such a tragic love, way more interesting than any version of Romeo and Juliet. Abelard, the scholar; Heloise, the noble maiden, his student, raised in her uncle’s household. Abelard was hired to be her tutor because she quickly outpaced her Latin education, wanting more Greek and even Hebrew. Heloise was a precocious and highly intelligent young woman, and her uncle saw to it that she had an excellent education. She had some highly advanced, feminist ideas, radical for medieval times (and even for today, depending on how progressive one is). Heloise often said that marriage was contractual prostitution and that a person intent on studying philosophy wouldn’t be able to bear the crying and squalor of babies. She openly preferred “love to marriage, freedom to a bond.” Of course I identify with her.

And of course Abelard and Heloise fell in love. But because they are human, they managed to fuck things up but good. Heloise got pregnant (she had a boy whom she named Astrolabe. No joke), her uncle had a fit, and Abelard sent Heloise to the cloisters where she had been raised as a girl to keep her safe from the fury of her uncle. He then eventually talked her into marrying him, though given her above-mentioned views on marriage, he must have had a hell of a time of it. She only consented to marrying in secret because a public marriage would have been bad for his academic career. Her uncle was appeased and made the announcement of the marriage to save his family and Heloise’s good reputation. However, Heloise denied the marriage, attempting to help secure Abelard’s career. I still cannot understand that. And I am right, because that turned out to be a Very Bad Idea. Her uncle thought that Abelard had discarded her and forced her into a nunnery, so he sent some thugs to Abelard’s room where they proceeded to castrate him. There went Abelard’s other future children, along with any thoughts he may have harbored of ever becoming Pope, because the Pope has to be in possession of at least one testicle, even if it’s in his pocket.

After his attack, Abelard took vows at St Denis, and convinced Heloise to take the veil as well. That was unfortunate for her because she stated she didn’t have a calling for a religious life and didn’t really want to be a nun. Alas, she was married to an academic religious man who couldn’t do any other vocation or father more children, and she was in exactly the sort of bind she likely had wanted to avoid her whole life. Eventually she did join the ranks of sisters at the Argenteuil convent, becoming their abbess. She died in 1164, 22 years after Abelard’s death on April 21, 1142.

The point of this history lesson? Aside from leaving behind a treasure trove of beautiful letters, the tale of Abelard and Heloise makes for some awesome historical fiction! Oddly, there is actually a dearth of novels about these two star-crossed lovers, though of course there are many, many history and academic books on the subject. There are many passing references to the pair in literature, from The Count of Monte Cristo to Lady Chatterly’s Lover, and they even make occasional appearances in Sharan Newman’s Catherine LeVendeur medieval mystery series. But the only two historical fiction novels I have ever read actually starring them are below.

The Letters of Abelard and Heloise, obviously, are on this list. No, they are not historical fiction. However, they are truly beautiful on a variety of levels. If you are going to read any other books about them, fiction or non-fiction, you simply must start with the primary source.

The Sharp Hook of Love by Sherry Jones. Jones incorporates snippets of the actual letters of Abelard and Heloise into her narrative, which is wonderful, because some of them are truly beautiful. Jones also takes an approach to one aspect of the letters which is open to debate. I appreciated her take on it, which I’ll not mention since it is spoilery, not only because it is somewhat controversial but because she did take something of a chance in doing so.

Stealing Heaven by Marion Meade. I found this to be an interesting novel, though Meade’s take on the Courts of Love is considered outdated and no longer accepted in academia. But the story Meade weaves is lovely and touching.

Are there other novels about Abelard and Heloise out there that you know of? I’d love to add them to my towering TBR pile!