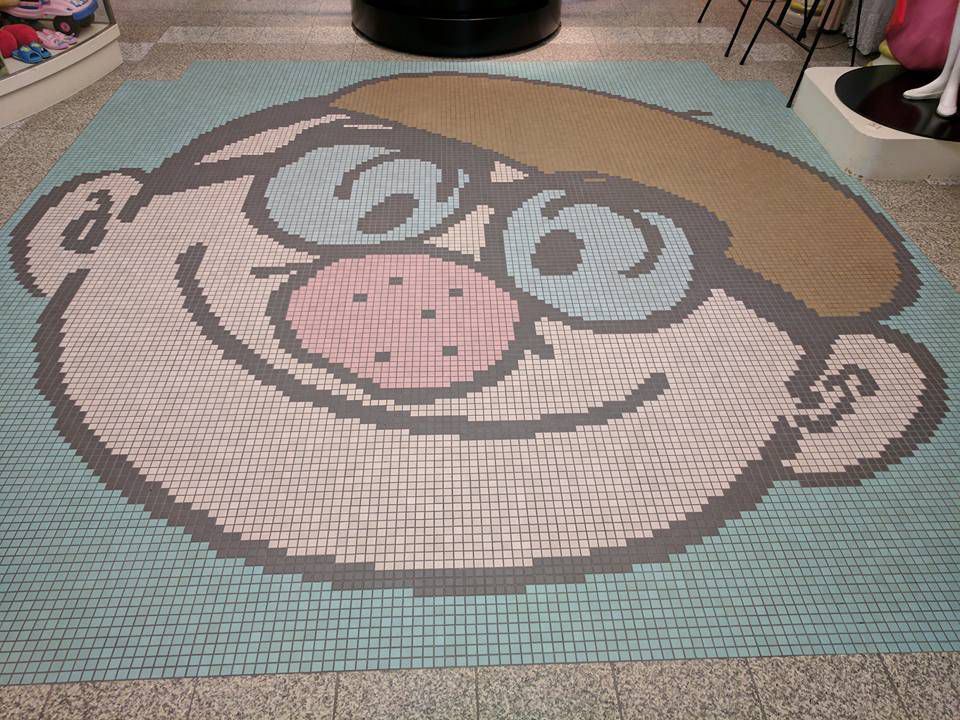 If you are interested in the cycles of influence in the manga world, your focal point would be Osamu Tezuka (1928-1989). The famed “god of manga” produced over 150,000 pages of manga over a lifetime of genre-building works, some of which were produced while he earned a medical degree and put everyone else’s passion projects to shame.

Tezuka grew up in the charming, quiet town of Takarazuka, Japan, where he caught bugs, went on childhood adventures, and repeatedly filled his sketchbook to capacity that his parents would then have to erase for the next day. Yeah, this kid was going places. I was fortunate enough last December to take a trip with my girlfriend to Japan, and among the can’t-miss items on our itinerary was “Tezuka Museum.” I have been a fan of Tezuka’s since around 2002, when I first read Phoenix: A Tale of the Future and was introduced to his science fiction via a slice of his magnum opus Phoenix series. In my eyes, Tezuka’s works transformed from “Disney-looking, rubber-bodied characters” to “pieces of a larger statement about humanity and its place in the cosmos,” with frequent love letters to animation and the influences of his youth.

Today, there are many Tezuka series available in English from several publishers, with Digital Manga Publishing currently leading the charge to publish his hundreds of works via Kickstarter campaigns. However, this is not a biography of Tezuka – take a look at The Osamu Tezuka Story by Toshio Ban or the Tezuka In English fan site for a more comprehensive look at his life. Let’s look at some photos, already! 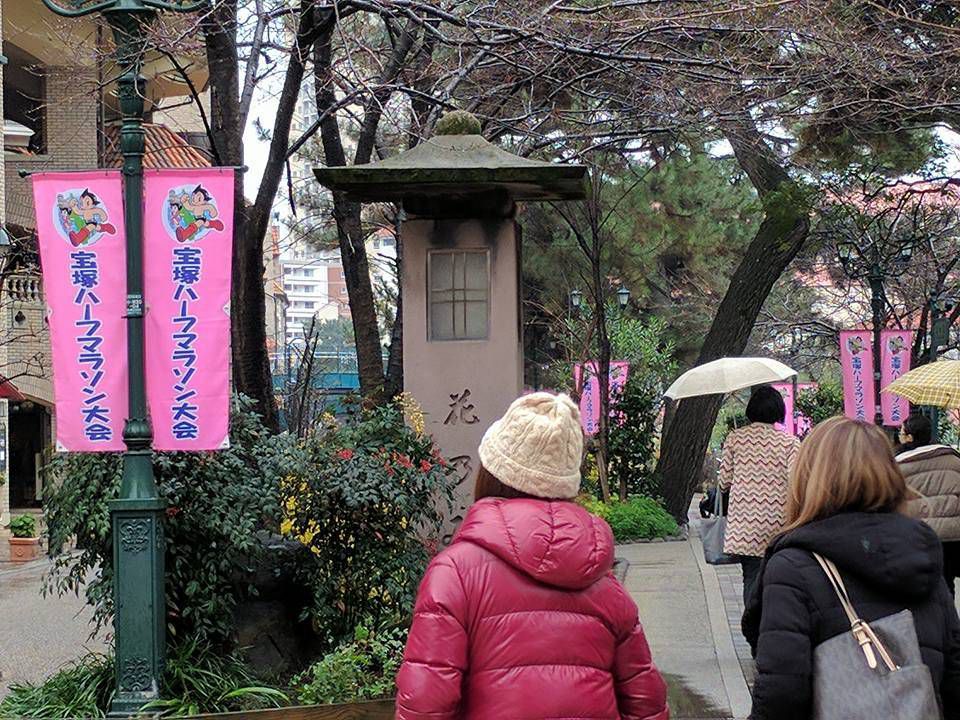 Flags of Astro Boy all but call out, “Come on over, fanboys and fangirls!”

When you get off the train at Takarazuka and start heading toward the museum, you will likely notice a scenic tiled path. Every so often, you will find a character portrait of a famous Tezuka character among the tiles. 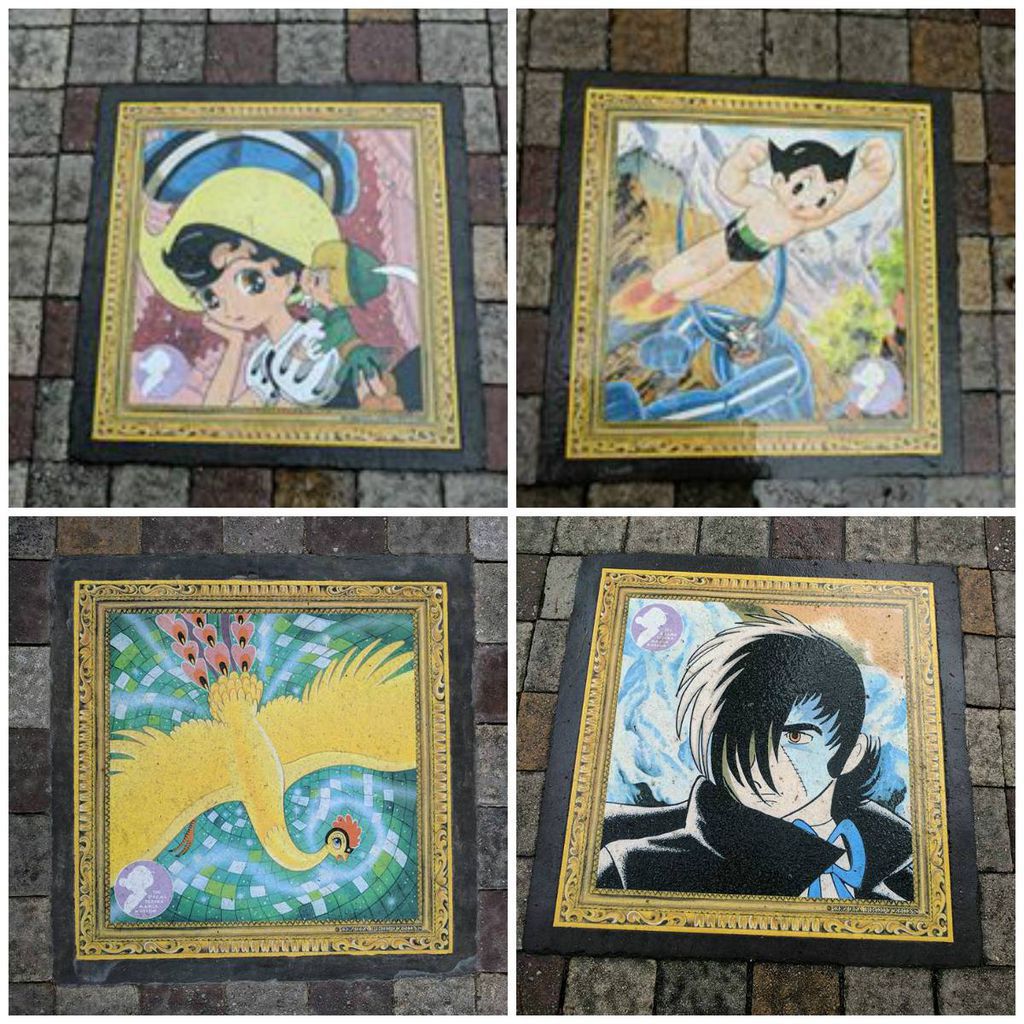 Dear fellow fans: there IS a land where the streets are paved with manga portraits! It can all be yours. They can live inside you. Clockwise from top left: Princess Knight, Astro Boy, Black Jack, Phoenix

You will also end up passing the Takarazuka Theater, which features the all-women Takarazuka Revue. Their musicals had a profound impact on Tezuka as a child. As a result, several of his manga feature scenes that play like a staged musical show. As a young illustrator, he made some money on the side drawing the actresses’ portraits. Later in his life, the cycle of influence came full circle as the theater performed adaptations of his manga. 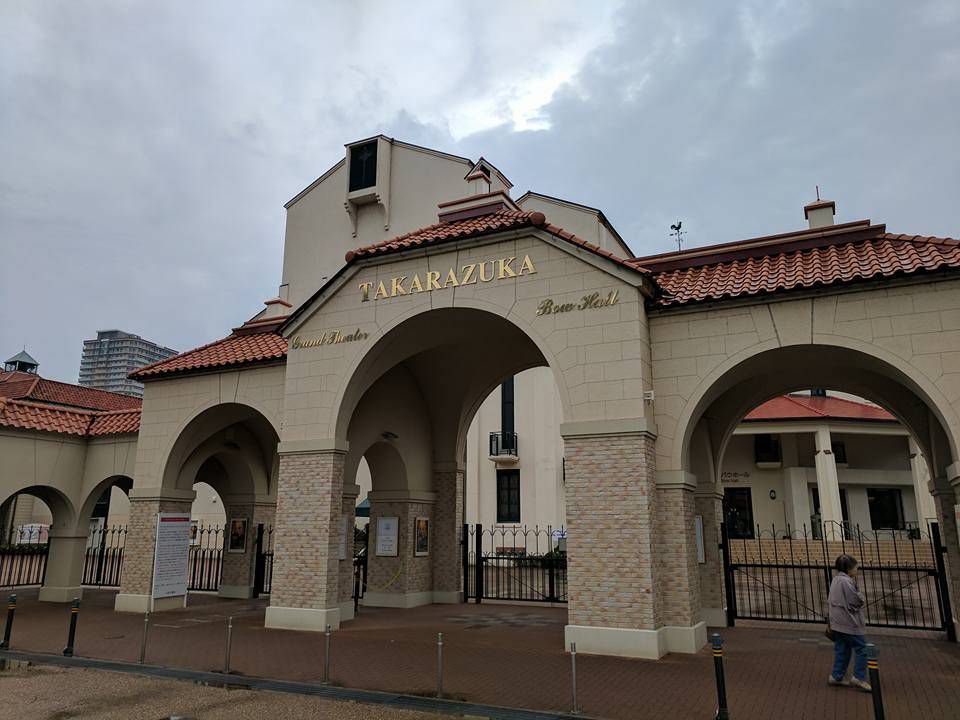 The current theater season was over, or else I would have attended and never stopped smiling. 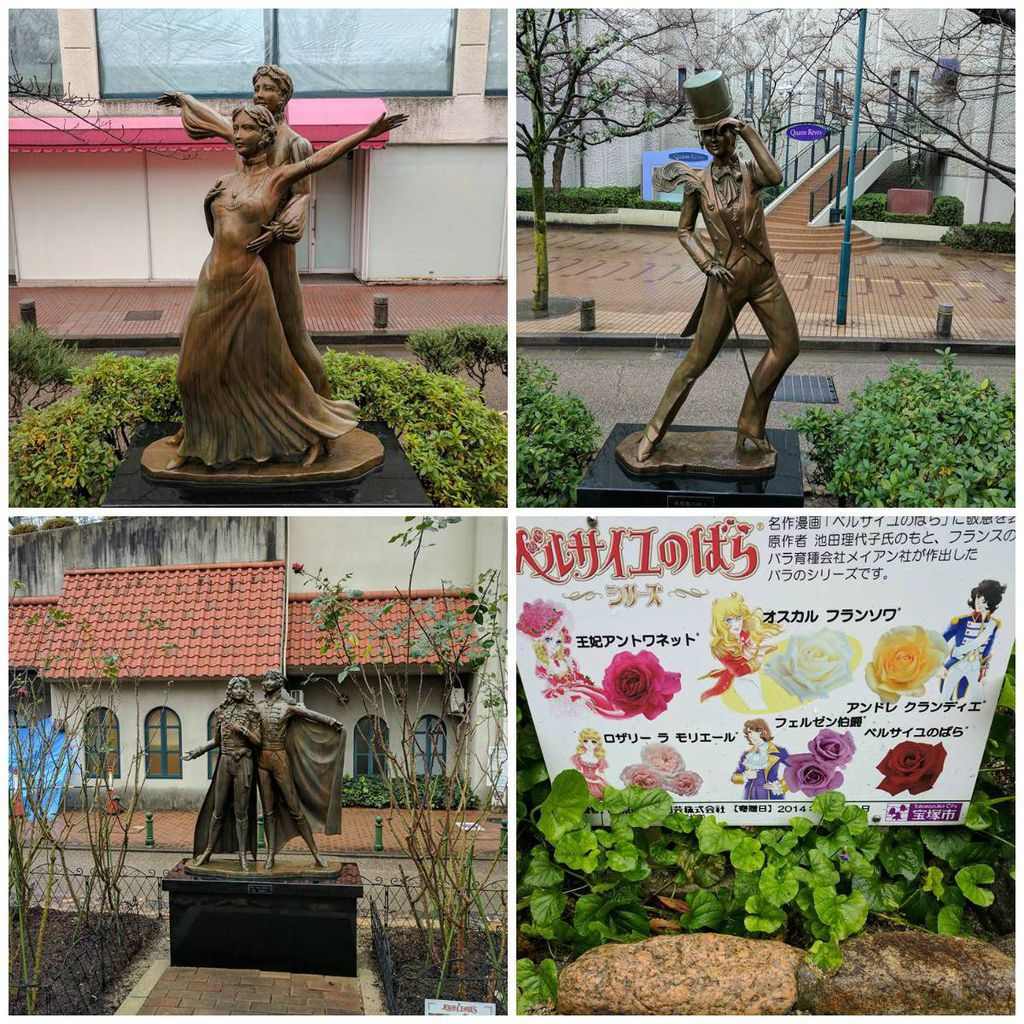 Takarazuka players honored with statues and flowers. Yes, even flowers can cosplay.

Okay, you’ve had a pleasant walk, you’ve been teased with cameos of Tezuka’s most famous characters, but how will you recognize the Tezuka Osamu Manga Museum? Easy: the Phoenix is there to welcome you, along with cement prints from an assortment of Tezuka’s stars. 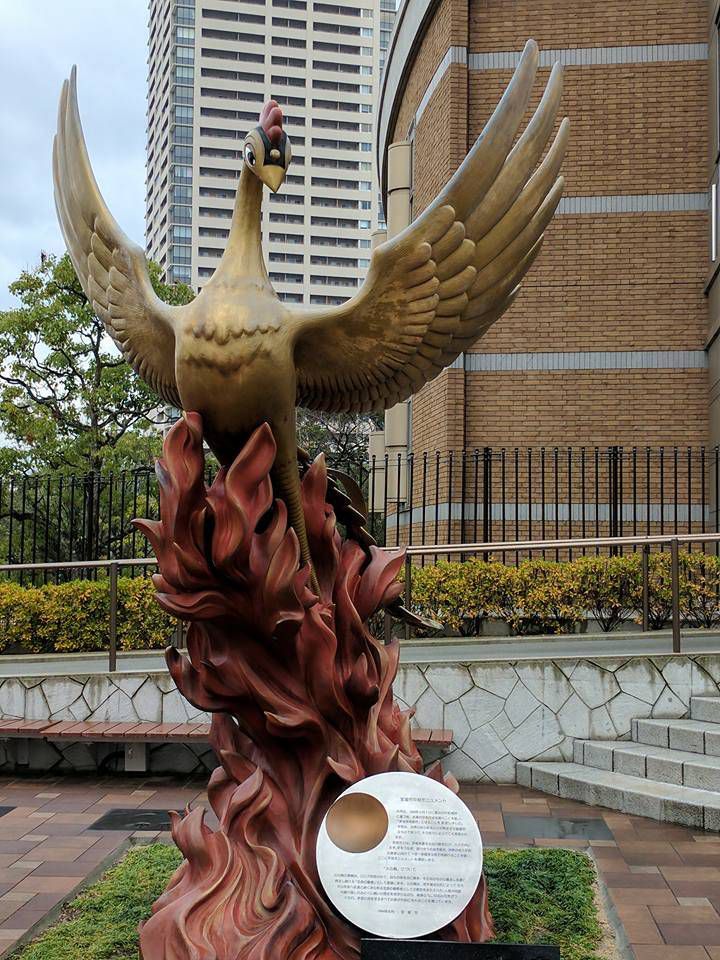 Imagine looking into the eyes of a being that checks in on humanity and sometimes tells a few of us the secrets of the infinite. It’s pretty nice. 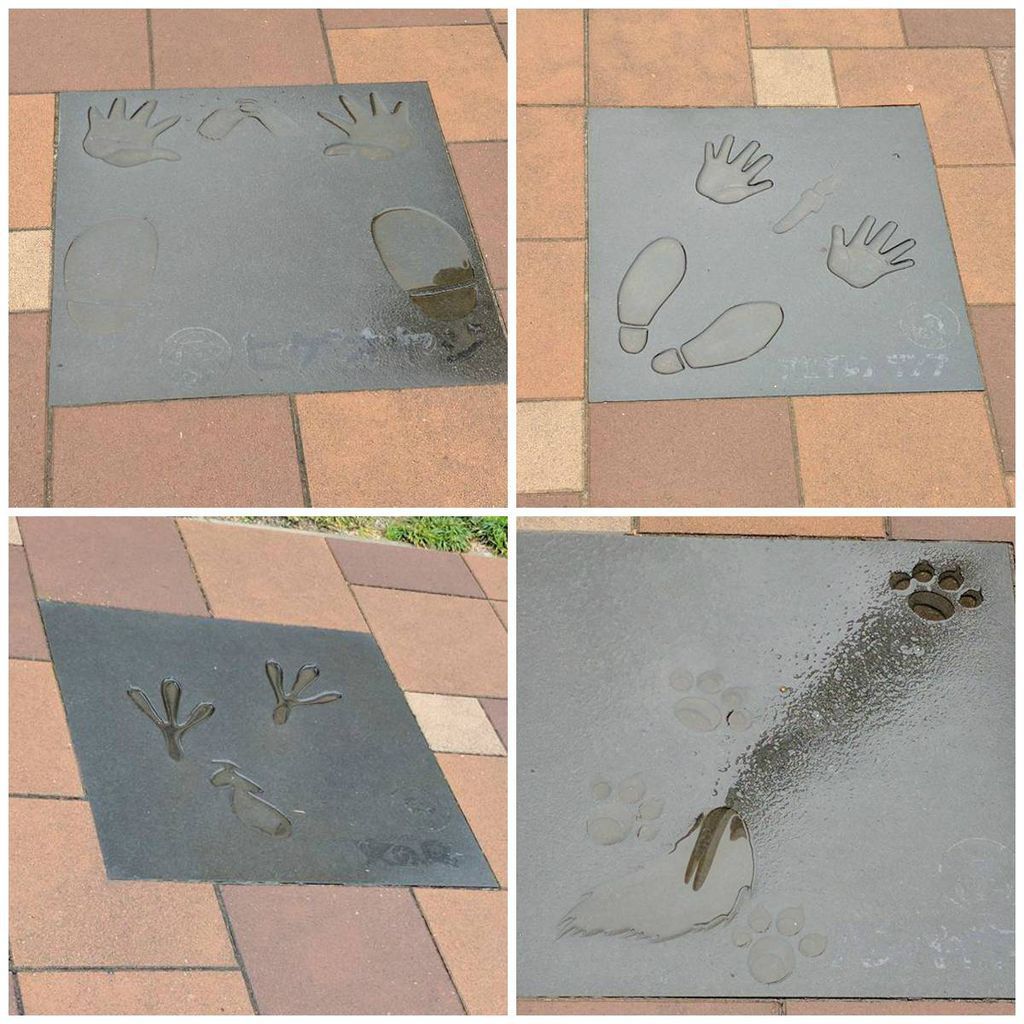 The decor is endlessly charming for Tezuka fans, with props and cameos aplenty to notice. There are even lesser-known creatures on the walls of the bathrooms. 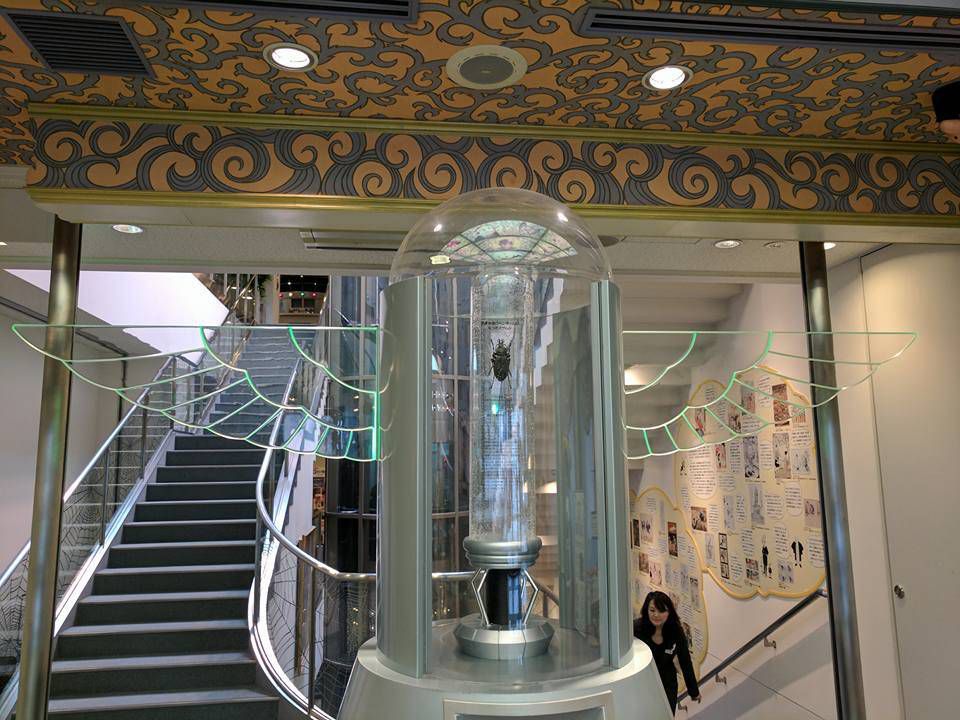 Tezuka liked to add “mushi,” or “insect,” to his name, hence this enshrined bug at the nexus of his punny namesake museum. “Osamushi Tezuka.” 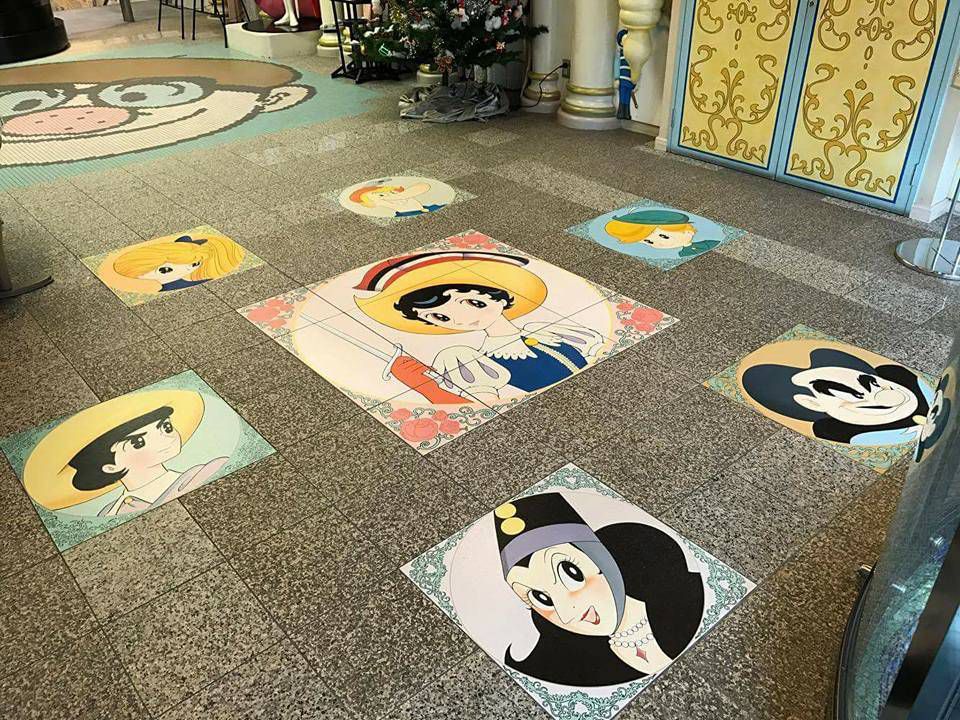 The museum focuses a lot on Tezuka’s kid-friendly titles, which fits the museum’s family-friendly demeanor. Peppy music and animations can be observed in some areas.

“Hello, it’s me, Osamu Tezuka, the floor on which most other manga are built.” 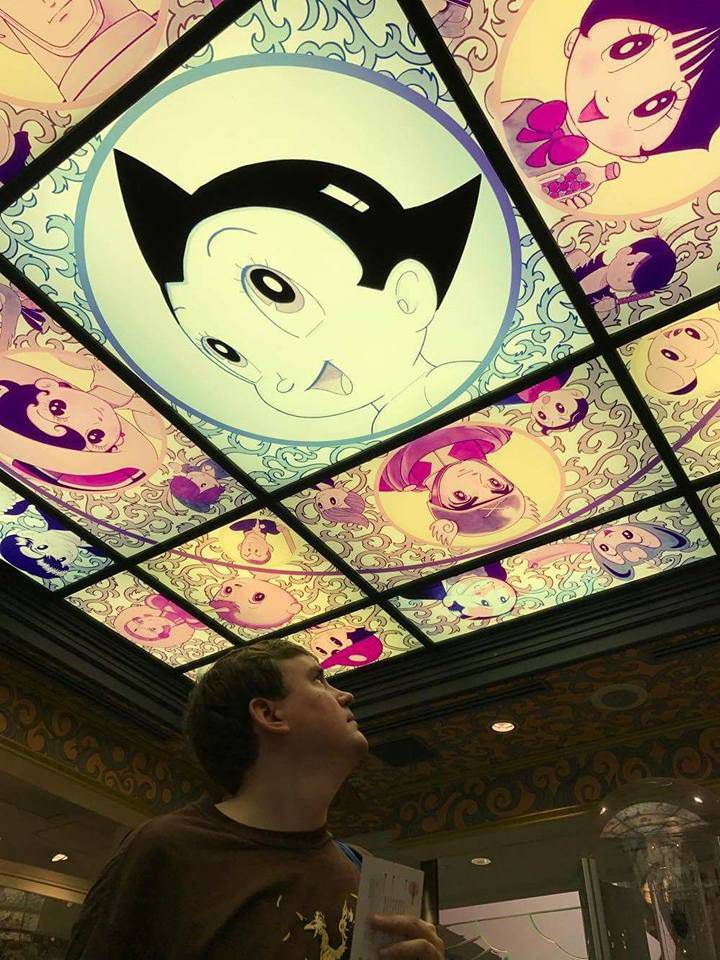 “It’s me, Tezuka again, whose creations are the constellations from which – well, you get it. No escaping me!”

Fully accessible bathrooms, no matter how many hands, feathers, or legs you may have. 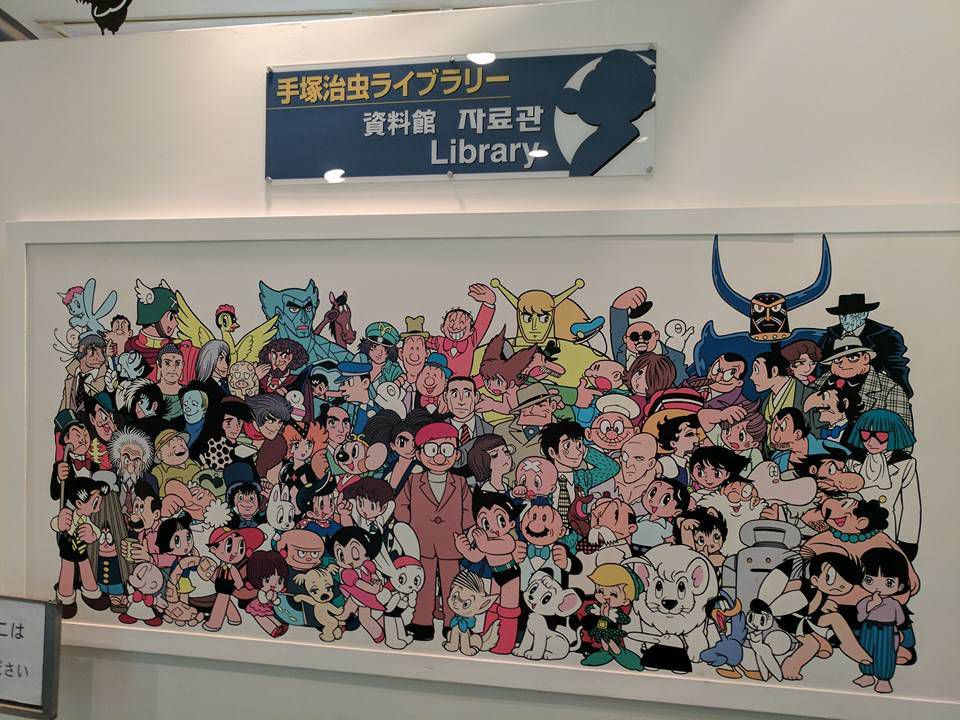 A large, annotated map of Takarazuka details the many spots around town where young Tezuka would have gone to school, hunted for bugs, and played with friends. The museum makes for a fun afternoon trip, but isn’t large enough to act as a theme park or all-day itinerary, so featuring the town of Takarazuka itself as a platform for exploring the same spaces as Tezuka is a nice local touch. 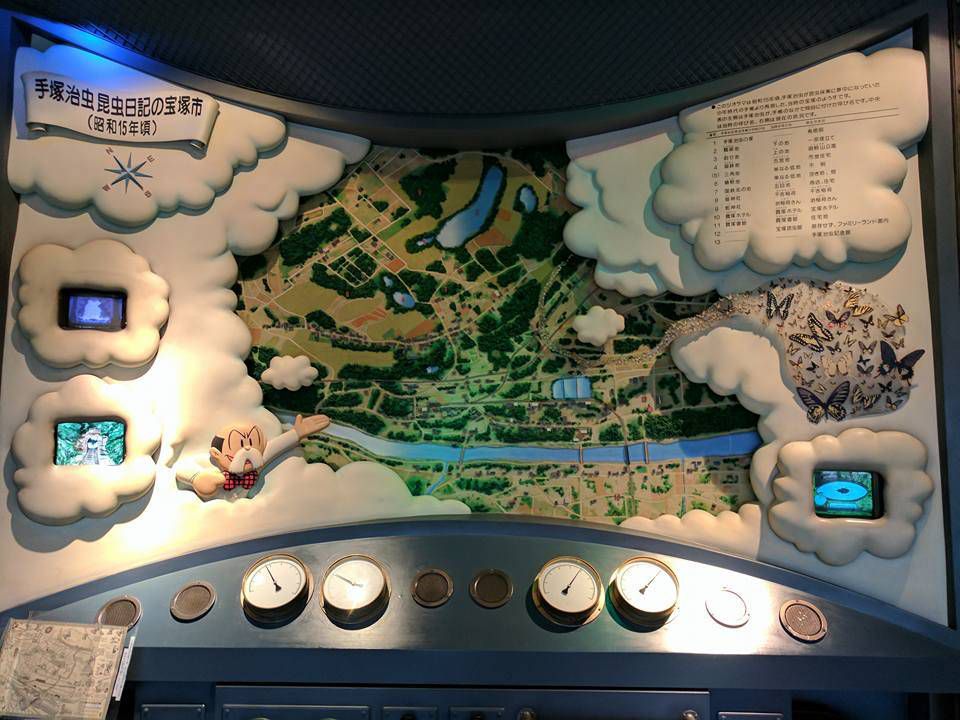 “Thank you for visiting the Tezuka Museum. If you’d like to further experience Tezuka’s life and times, try working in a World War II munitions factory, studying for med school, illustrating an instant best-selling comic, managing and funding your own animation studio, playing piano by ear, and turning down an invitation from Stanley Kubrick to work on ‘2001: A Space Odyssey.’ First step: go outside.”

If Tezuka created so many characters and series, how are people supposed to get up to speed? At the reading library, of course! Visitors are free to read through a large selection of titles, in addition to shopping for books, DVDs, and soundtracks to Tezuka productions in the gift shop. 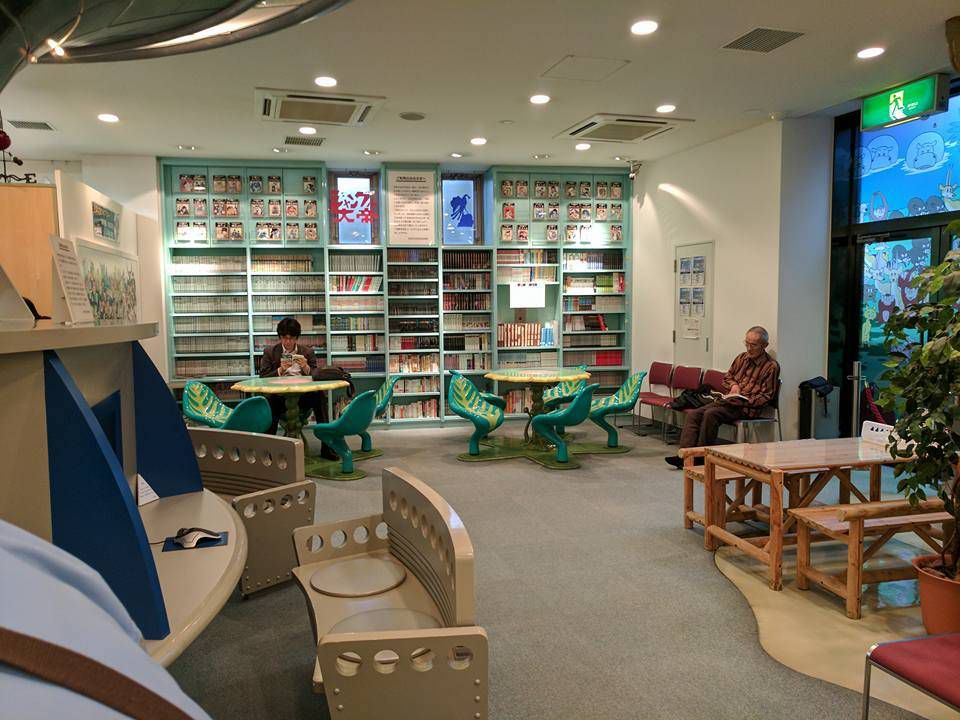 Who wouldn’t want a reading area in every museum for studying featured subjects? 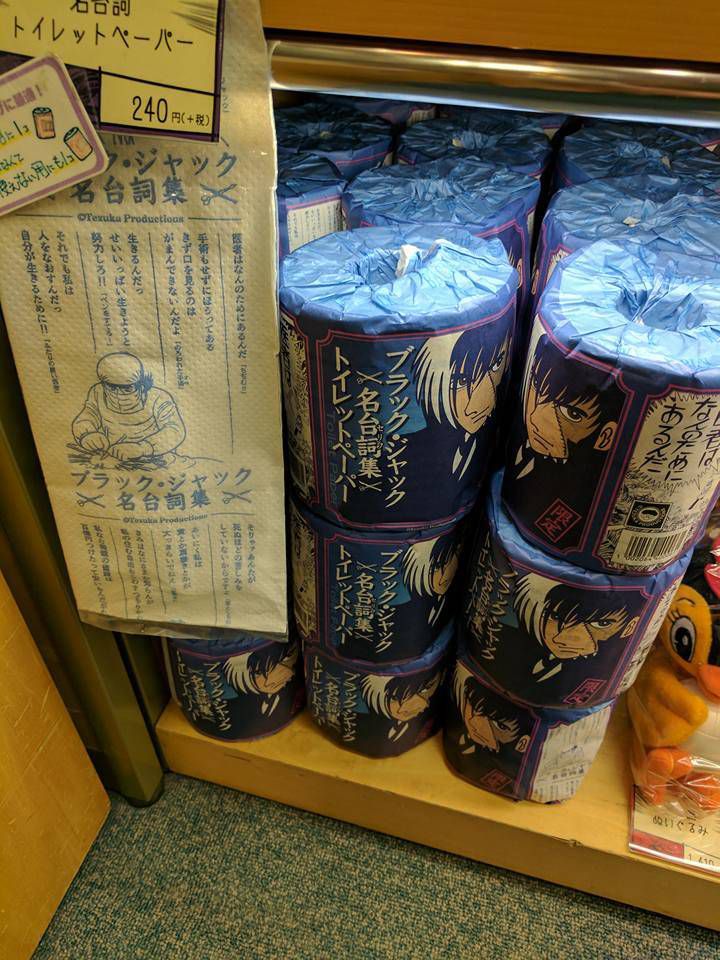 Considering Tezuka once drew a comic on toilet paper and a coworker wiped his butt with it, this is an oddly appropriate form of merchandise. 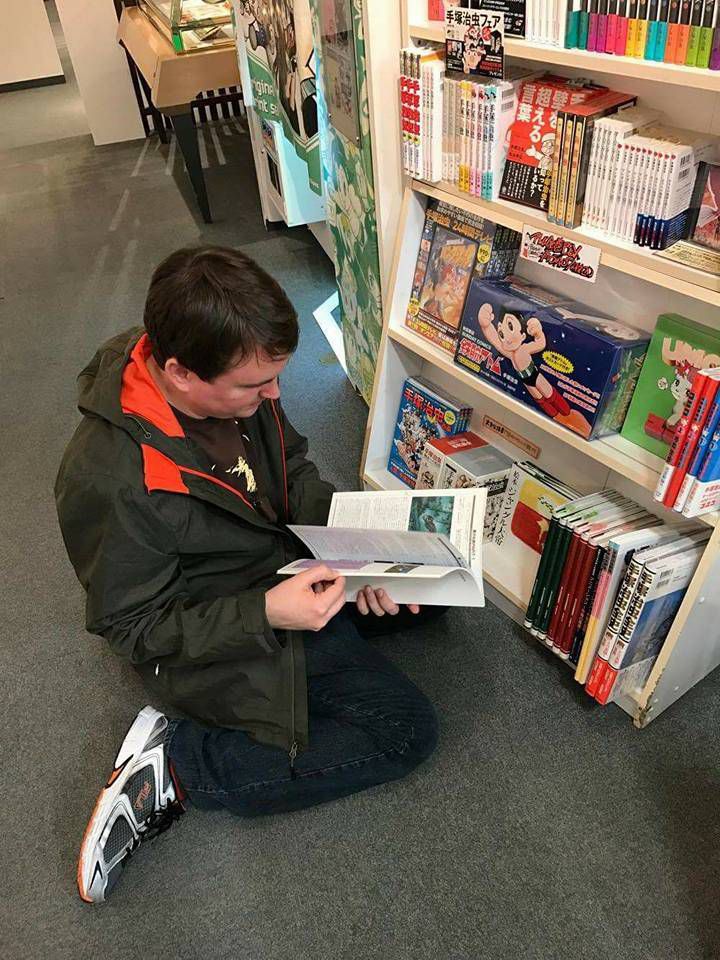 The Osamu Tezuka Museum was inaugurated in 1994, and it shows. That’s not a knock on the various displays detailing the chronology of Tezuka’s life and career, as well as a history of Japanese comics, but there is a definite feeling of walking through a time portal to the 90s. Computers for watching clips of Tezuka’s work, playing ancient Flash-looking games, or simple cartoon editing exercises all handle like relics. 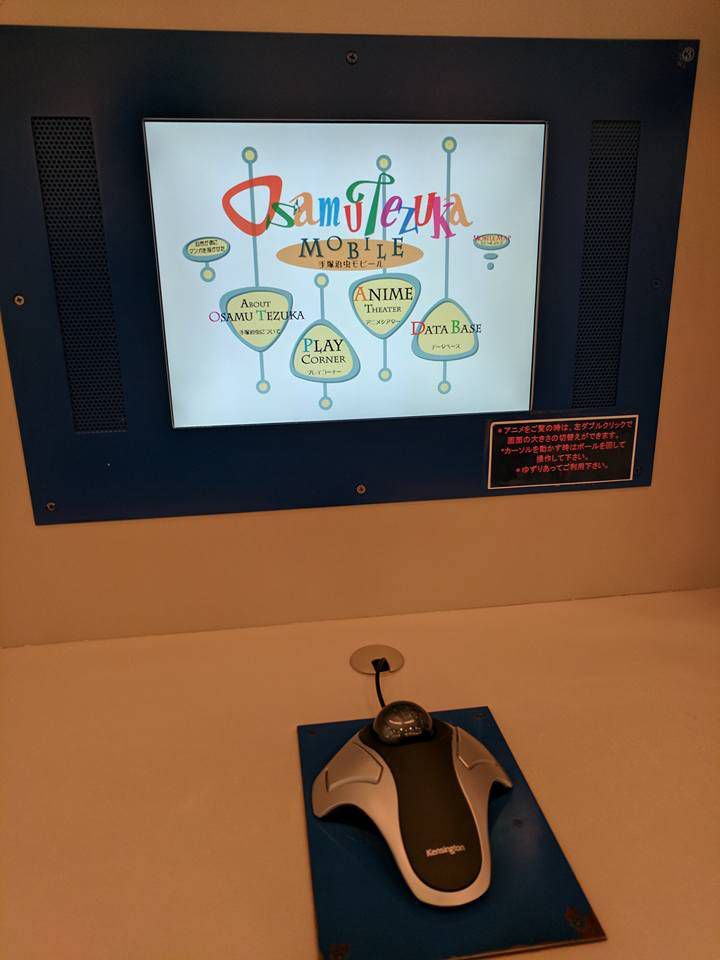 You might say this is a museum in more ways than one. 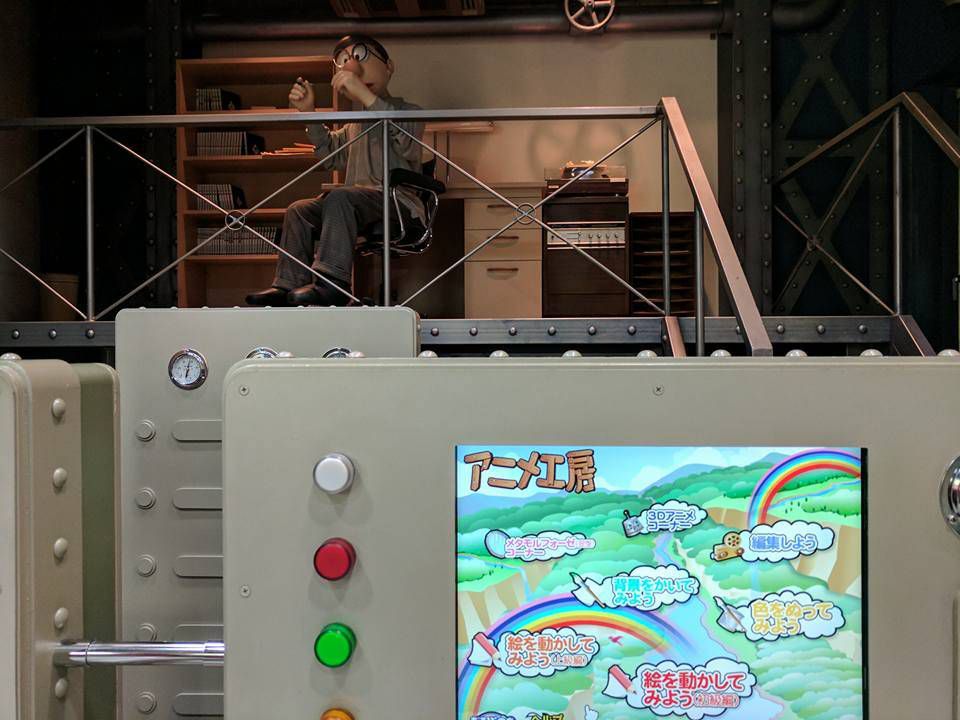 Hey, kids! Want to enjoy the exciting life of an animator while Mean Ol’ Director Tezuka cracks the whip from above? Your dreams have come true! 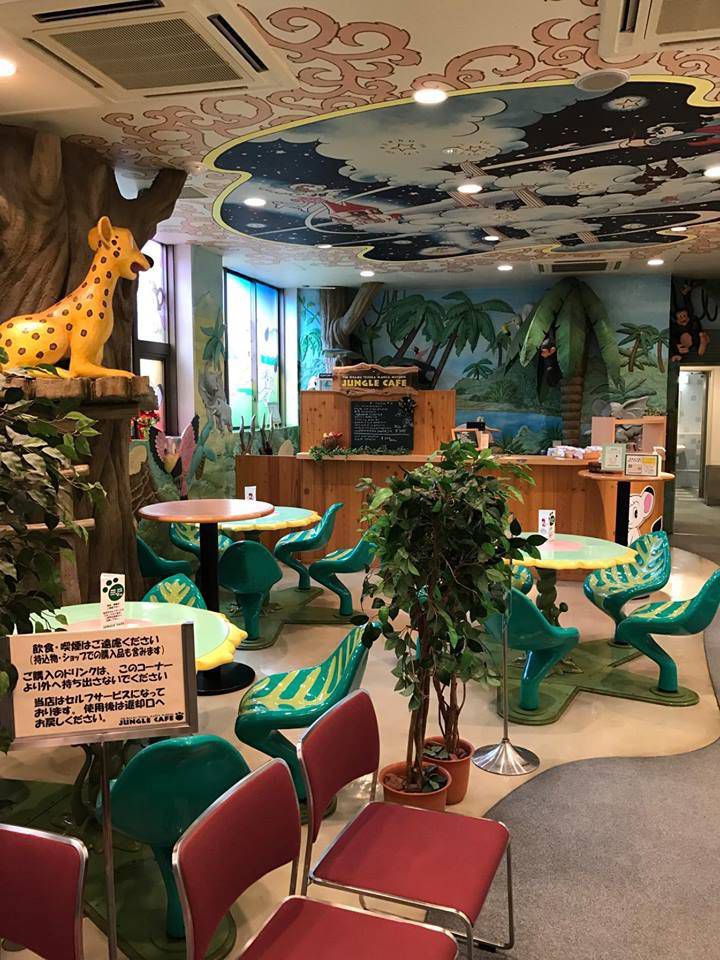 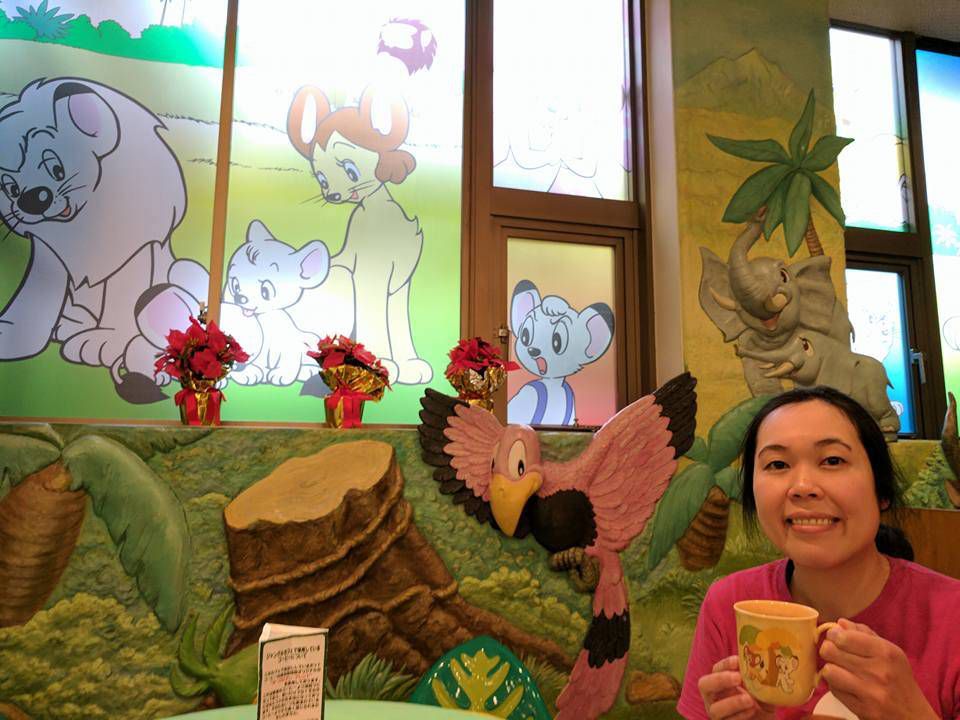 She dubbed her drink “Tezu-cocoa.” Make it so, cafe vendors!

There are so many more features to the museum, including a coloring station, statues and cutouts of several characters, a screening room, and a whole side exhibit featuring other artists, but I want to leave some of this trip to the imagination. However, if you want more information, I recommend the Tezuka Osamu Manga Museum official website and information from the English version of TezukaOsamu.net.

There are several more places in Japan dedicated to its standout anime and manga creators, including Shigeru Mizuki Road, Studio Ghibli Museum, and the Kyoto International Manga Museum, but Tezuka leads to the roots of their work. If you ever get the opportunity to visit Japan, these sites are worth the extra train ride.