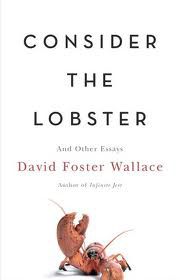 David Foster Wallace is kicking my ass. I’m currently reading Consider The Lobster, his collection of essays, first published in 2005. His effect is two-fold. Primarily he makes me want to forgo all work and food and retreat into a darkened corner to suckle at the teat of amazing, insightful and reflective writing. But there is also a dark, instructive undertow. He also makes me feel like a completely inadequate, trite and shallow writer. I’m actually wearing a sack cloth as I write. I’ll roll in some ash later.

It’s been a while since a writer has had such an effect. After guzzling down One Hundred Years of Solitude by Gabriel Garcia Marquez, I found my paragraphs possessed a magical realist ache. I still turn to Ernest Hemingway to remind myself that more than two clauses in a sentence is a grotesque decadence. And I can’t describe a night sky without feeling that I’m quoting Cormac McCarthy.

Wallace has joined their ranks. He is under the skin. He has added another filter through which life will be sieved through. At the very least, with Consider The Lobster, he has rendered all journalism superficial. Thanks Dave.

You might have picked up that I have mixed feelings about this encounter with Wallace. But it explains a lot that I have come across in my life. I used to work for a Sunday newspaper in Scotland. On the features desk, two writers stood out. They both fought with the editors when asked to turn a story around in less than a week. They both wailed and gnashed their teeth when their word count was slashed below 3500 words. They both verbally lacerated any sub that tried to straighten out their wordplay. They protected their turns of phrase like a mother with her first born.

Initially I thought they were precious and pretentious. Turns out they were both just brilliant. I now see that both their asses, and their work, had Wallace’s boot print on them too.

It is therefore no coincidence that when I mentioned last month that I’d just bought my first collection of DFW, they were the first two people to get in touch.  I may be shamefully new to Wallace’s work, but I now see I’d been working alongside his ethic for many years – “Up, Simba,” his 78-page account of John McCain’s candidacy for the GOP ticket at the 2000 elections, includes a lengthy introduction complaining about how Rolling Stone had to cut the original in half and simplify it. In it I heard many echoes from a Glasgow news room.

So where does a writer just discovering Wallace go from here? Become more demanding of himself and the words he commits to the page? Yes. Realise that introspection is allowed in journalism? Yes, with qualification. Finally realise why everyone was so distraught after DFW killed himself and then add his own, newly formed portion of grief to the pile? Definitely.

Edd McCracken lives in Scotland, works for an ancient university, and writes about culture for fun. Follow him on Twitter:  @EddMcCracken