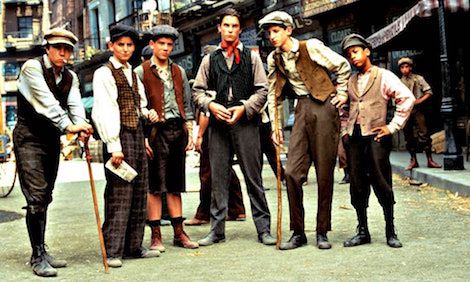 I am 34 years old and believe that there are two types of people who are roughly my same age: those who grew up watching the 1992 Disney musical Newsies, and those who pretend they didn’t catch it at least once during a Disney Channel free preview weekend or on a TV screen rolled in on a cart during music class.

I am of the first type and would check Newsies out at least once a month from Blockbuster (does anyone else remember that the video store copy had a PSA before the movie featuring Newsies cast members in a drug free campaign?). My middle school brain memorized the songs, the dance moves, and even read some Newsies fan fiction in the early days of the internet.

If you are of the second type, Newsies tells a fictional account of the 1899 Newsboys’ Strike against Joseph Pulitzer, lead by newsie Jack Kelly.

The creative team behind Newsies banked on this nostalgia and brought Newsies to the Broadway stage in 2012. My husband and I took Amtrak to New York, slept on a friend’s floor in her Brooklyn apartment, and had orchestra seats to see the Original Broadway Cast of Newsies! Right in front of me, Jack Kelly dreamed about moving to Santa Fe, Race Track tap danced during King of New York, and Spot Conlin saved the day with his Brooklyn Newsies. Added songs, new characters that filled in some plot holes, and exploding dance sequences improved upon the original.

A touring production followed the Broadway run. The Newsies momentum continues. Newsies the Broadway Musical was filmed live and shown in theaters across the country. Now, you can watch this production on Netflix. This summer, theaters in Utah, Indiana, and many others will present Newsies to hometown audiences.

If the 1992 movie, the filmed Broadway version, and the local productions are not enough, here is a reading list about the musical, fictional and real newsies, and a book that imbues the Newsies spirit. 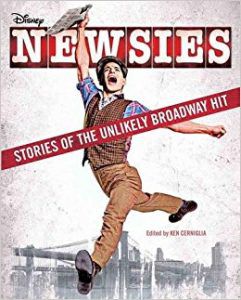 This work is a history of the 1899 Newsboys’ Strike, the 1992 film version, and the Broadway musical from conception to everything involved with a hit musical.  This book is a compilation of interviews and “stories” written by the cast and creative team. It includes behind the scenes photos, costume sketches, and even photos submitted by fans. Even if you do not care for Newsies, this is an interesting look at all of the pieces that must come together to create such an impressive show.

children of the city: at work and at play by David Nasaw 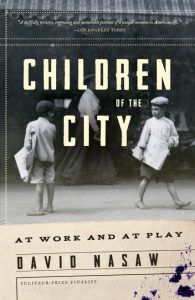 While this one is not solely about newsies, there is an entire chapter called Newsies. David Nasaw provides historical facts and details about the life of the newsboys and sometimes girls. He describes the newsies of the late 1800s and early 1900s as “a band of little merchants selling their wares. Some were dirty, some ragged; some scowled, some whimpered; but they were all on the streets for a noble cause: to make money for their families—and themselves.” I don’t think Jack Kelly or Katherine Plumber could have summed up the job description of a newsie any better! 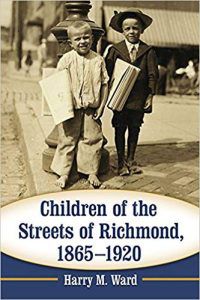 Newsies did not only live in New York City. They worked and lived in many cities and town across America. Harry Ward, a professor from The University of Richmond, provides a look at the children who worked and played in Richmond, Virginia around the turn of the century. He includes stories and newspaper quotes about the newsies of Richmond. One small newsboy was even arrested and taken to court for “exerting extraordinary lung power” while hawking the headlines along Broad Street. 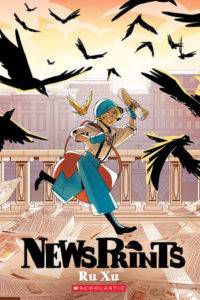 Ru Xu’s graphic novel takes place in fictional Nautilene, a port city involved in a war with a neighboring country. Due to the war, the beautifully named Lavender Blue finds herself homeless, disguises herself as a newsboy, and sells the daily Bugle. Blue must hide her true identify. She helps a mysterious inventor develop a weapon that could end the war and befriends a boy named Crow who has secrets of his own. I am looking forward to the next Newsprint book, which will be released in January, 2019.

city of orphans by avi 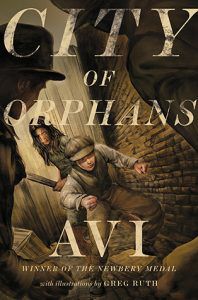 Avi is a master of children’s historical fiction. In the tradition of The True Confessions of Charlotte Doyle, Avi tells the story of Maks and Willa. Maks is a Danish immigrant who lives in a tenement apartment with his large family. He sells newspapers to help his family get by. Orphaned Willa lives on the streets where she makes 10 cents a week picking through trash for rags and bits of usable cloth. She and Maks become involved in a mystery when Maks’s sister is arrested for stealing a watch at the brand new Waldorf hotel. Even though this is a children’s book, I could not put this one down! This is a compelling story about an immigrant family who works together to solve a crime and a mystery! 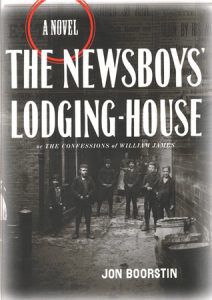 In the movie and musical, the newsies live together at The Newsboys’ Lodging House. We see them sleep in bunk beds, wash before leaving for the day, and generally enjoying their brotherhood. In Jon Boorstin’s novel, psychologist and philosopher Henry James searches for the key to human nature by teaching the inhabitants of the Newsboys’ Lodging-House. He quickly finds that all of the newsboys are not plucky innocents, but are instead enticed by the darker side of New York City. This is an interesting, fictional account of James’s thirtieth year, of which little is actually known. 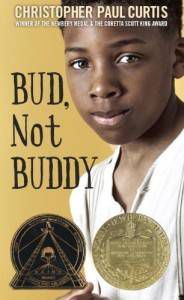 This book is not specifically about newsies, but instead is a book about a boy who imbues the spirit of Newsies. Like Jack Kelly, Bud is mother-less and on the run as he travels across Michigan to find his father. While not a newsie, Bud develops the same street smarts and survival skills that the newsies employ on a daily basis. I believe this would make an excellent musical in the tradition of Newsies!

extra! Extra! this just in!