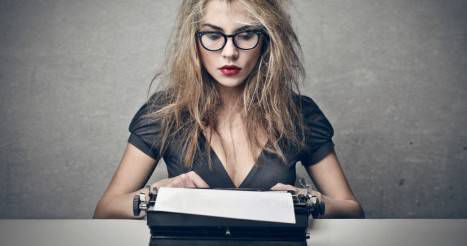 This is a guest post from Hannah Engler. Hannah is currently an English major at the University of Michigan. She is the Editor-in-Chief of UMich’s first and only feminist magazine, What the F, as well as a contributor to sites like Slant News and The Odyssey Online. When not writing or reading (which is hardly ever), she makes Indian food in her slow cooker and watches Nora Ephron movies. Her heart (as well as her family) resides in Washington, D.C.

The first thing they teach you about memoir-writing is that there is a difference between literal truth and “emotional truth,” meaning, essentially, that it doesn’t matter if you don’t remember all the details, so long as you remember the significance of the event itself. Something you’re allowed to do when working in this genre is write that your roommate was wearing a blue coat, even if her coat was really pink,  just because it works better for the feeling of the scene if her coat was blue. Her blue coat is not a piece of truth, but it’s an emotional truth.

Fabrication is inherent in memoir writing. Number one, it’s impossible to have an unbiased view of your own life, period; number two, it’s impossible to write about something in the past tense and not see it through the lens of the present. These factors, combined with the fact that real life hardly ever binds together in a coherent, readable narration, is what makes memoir such an interesting genre. It’s composed of people telling the stories of themselves. These stories are all true, in a way; they’re just not factual.

A memoir should not be subject to rigorous, journalistic lie-detecting. Who cares, for example, if the humorist David Sedaris exaggerates some of the ridiculous characters he has met over the course of his life? In his books, the character of “David Sedaris” is also caricatured and eccentric, presumably much more neurotic and bumbling than the real Sedaris. In Sedaris’s world of everyday lunatics, his narration is necessarily a little deranged; the emotional truth behind it all is that life can be unbelievably ridiculous and funny, if you’re aimless and observant enough. Does it matter if Sedaris makes stuff up? It doesn’t make the stories less hilarious, so, in my opinion, no.

My favorite autobiographical essay I’ve ever read is “The Ghosts of Loiret” by Shirley Jackson, from her posthumous collection Let Me Tell You. The essay is purportedly a work of creative nonfiction, but, like all of Jackson’s work, it very quickly turns lightheartedly sinister. In the story, Jackson’s husband is trying to decide what to get her for her birthday, but is running out of ideas for creepy presents (she already owns a painting of a skeleton reading poetry, a crystal ball, tarot cards, talismans, etc.). She tells her husband that what she really wants this year is a collection of photographs of old houses to satisfy her interest in architecture. He complies, but Jackson only has a few days to enjoy her houses before realizing that one or more of her intentionally non-spooky photographs have captured ghosts.

Throughout the memoir sections of Let Me Tell You, the “truth” of Jackson’s life is as elusive as any of the phantom menaces in her horror fiction. According to Jackson, her kitchen contains a helpful poltergeist, and her days are frequently interrupted by mysterious strangers wanting to look around her house. Was Jackson really some kind of conduit for the macabre, or a housewife Nancy Drew? Probably not. But I find tremendous enjoyment in picturing one of the greatest horror writers of all time bickering with her husband over the merits of using a luck talisman on poker night, or surrounded by photographs, indignant at her inability to escape the paranormal.

They say that real life is always stranger than fiction, and maybe there’s something to that. But I think the line between fiction and reality is less strict than we think. Our lives are, in a lot of ways, a series of stories we tell ourselves. We rearrange our memories in the order that makes the most sense; we create patterns, interpret random events for deeper meaning. So who is to say that exaggerations, mistakes, even lies are any less valuable to our autobiographies? Aren’t they just as much a part of our lives? To me, the strangest thing of all is to render the complex fantasy of life into pen and paper. I applaud any attempt.