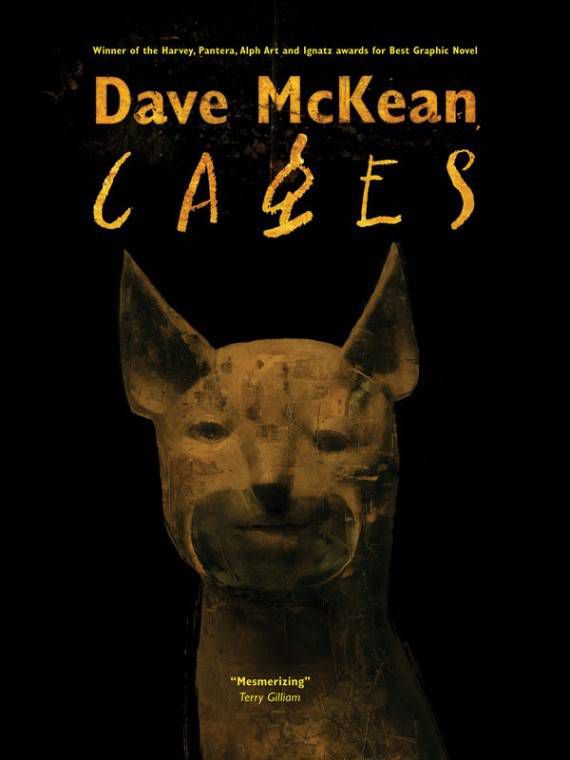 My first encounter with Cages by Dave McKean was not coming upon it in a bookstore, or being recommended it by a more well-read friend, or even in a college class. It was altogether more strange than that. Five years ago, Dave McKean – illustrator, filmmaker, musician, frequent collaborator with Neil Gaiman – appeared with Gaiman at the Walker Center in Minneapolis, for an “in conversation” evening between the two of them (which awkwardly lasted as “in conversation” for about five minutes before they rushed to questions and answers because, as they pointed out, they’ve been in conversation for twenty-five years by that point).

During the course of their talks, Dave McKean walked the audience through some of his work, filmic and illustrative alike. It was all wonderful, gorgeous stuff, but then he got into showing off some pages from his massive comic book Cages, the one comic (at the time) that he had written as well as illustrated.

They were gorgeous pages, but he shared a terrific anecdote about how some readers, a couple of issues in, were writing in smug letters going “Oh yeah, I see where this is going. Yep. I get it.” And frustrated by this, Dave said, he wrote in a sequence designed to be completely inexplicable. Just to stop the letters.

The sequence was gorgeous. The anecdote was funny. I was intrigued by having this cavalier, playful attitude inside of a comic. Of course, I had to go find Cages.

It’s a behemoth of a comic, the sort of hefty book where the binding itself is straining to hold together and you could probably take out some burgalers with it, should the need arise. The art is gorgeous, wandering from simple black and white sketches to detailed painted pages, to all manner of other styles. And how do I explain the plot? An artist moves into a building full of peculiar and interesting characters. Surreal things happen to them and the world around them. Eventually surreal things stop happening and the book ends.

If that sounds unsatisfying, it really isn’t, when you get down to it. It’s a wonderful read. The art is amazing, and the people and their voices are unique and terrific to spend time with.

But that aside, it was a huge book for me, in ways it would take me ages to realize. Cages was the first book to really show me that you could play within the comic art form, and it didn’t necessarily mean that you were failing to take the work or the medium seriously. It just meant that you were experimenting, in almost a freeform Jazz sort of way.

It was just fine that the plot wandered and was surreal and wasn’t a smooth, pieced-together thriller-clockwork like an airport paperback. At one point, the narrative wanders off to share creation myths and other bits of fable-like storytelling, because…well, why not? Because he wanted to. There was a sense of play at work.

It was great that the artwork didn’t have to remain realistic. I grew up with 1990s superhero comics, which isn’t exactly the hallmark of “realistic” by any means, let’s be honest. But there was no sense of stylized cartooning in there, just more pouches and more treads on the boots. To eventually to encounter Cages, where in one sequence a King loses his temper and yells at everyone and turns into a huge shouty cartoon figure to do so…that was exciting. It was that sense of play again. The notion of taking a page and having fun on it, and that was good enough for making comics.

I don’t know that Cages was my first non-mainstream comic encounter – I’m trying to remember and failing because I am thirty years old and therefore ancient – but it was certainly the earliest one that had a huge impact on me. Because it was so surreal and so playful, it relaxed me a great deal by saying “this is what we can do. And we can get away with it, and you were wrong for ever thinking we couldn’t.”

It influenced my own attempts at comics. It also meant I was ready for encountering works like Maus, or Promethea, or The Arrival by Shaun Tan. Works which I think wouldn’t have landed with me quite so well, had I encountered them pre-Cages. I just wouldn’t have been ready for comics that wandered off from what I thought was the basis of comics, wandered into clever storytelling devices and a sense of play in the art.

Here at the end of me appreciating Cages, what I mostly want is to encourage you to try it out. I think a lot of people avoid it because it seems pretty intimidating. It’s huge, it seems very ART and complex, like the kind of book you’ll have to debate in a college workshop with insufferable people. And yeah, I suppose it can be those things. But it’s also fun, clever storytelling and play, and if you hold those ideas firmly in your mind when you approach it, I think you’ll find it very enjoyable.

And if you don’t, you can keep it around as a really good home-invasion defense. That seems like pretty good value-for-money to me.