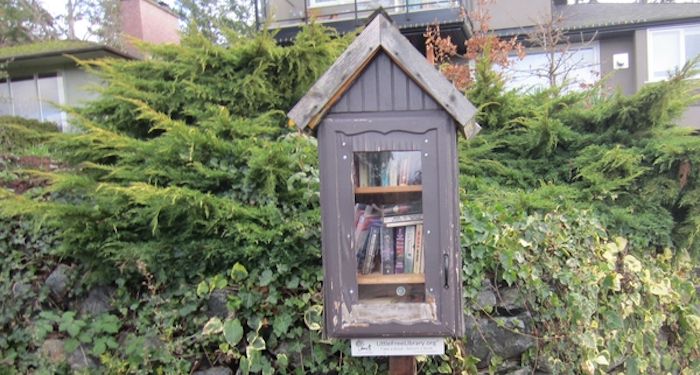 I live in a bookish city. In non-pandemic years, we have a used book sale that people line up for the night before. We have a high bookstore-to-resident ratio. It’s not surprising, then, that Little Free Libraries took off here. I bump into them fairly regularly, but I’ve always wanted to check them out more deliberately.

Since I owed my dogs a long walk, I thought I’d see how many LFLs I could get to on foot in a loop around my house. I found a map of the ones in my city and the surrounding area, and it turns out that there are almost 400 of them! There are more in the wealthier areas of the city, as well as downtown, but I did find nine that were within walking distance. The map was made in 2016, though, so I wasn’t sure how many were still around. I decided to take a tour of them and document what I found.

I decided to start with a LFL I was sure I hadn’t seen before. This one is about a half hour from my house, but the rest were lined up on the walk back. What I found was this adorable little free library with a pointed roof and a glass door. The shelves were full, but there wasn’t anything on my TBR. The housing itself was pretty worn out, though, and I wondered if using this five-year-old list meant all the ones I found would be past their prime.

The next one I found had a simple but eye-catching design. It made me eager to open up the door and see what treasures were inside. Unfortunately, what I found was water-damaged books. Like the first LFL, this one had seen better days, and it looks like it no longer protects its contents from the elements. On to the next!

This one was a treat! It instantly looked like it was well cared from. The paint was still pretty fresh, and the books were neatly shelved instead of stacked haphazardly. It even included a little stuffed animal! Although I didn’t find any books to take home, it did have some good quality middle grade books—I hope that nearby kids are taking advantage of this!

By LFL #4, I was beginning to tell what sort of book would be inside. They were mostly fairly worn paperbacks, usually books that were bestsellers many years ago. Each one had full shelves, but there wasn’t a lot of variety in the selection. I hadn’t found anything to swap for the books in my bag. But I forged onwards!

This one was another favourite for me in the design. The painting on the front and the incorporation of the house numbers made it feel like a lot of love went into this project. The books inside were very similar to the others, though, so I closed the door and headed to the next one. By this point, I had already passed the hour mark and was only halfway through the loop. My estimation had definitely been off!

LFL #6 was the first stop where I couldn’t locate the LFL. It turns out that it had been inside a coffee shop, which has since relocated. I reported the missing LFL to the website which hosted the map—I will check back to see if they’re still updating it.

Luckily, my next stop was to one of my favourite little free libraries. It’s inside the community garden, where several people were busily working. (That shows how much I know about gardening: I didn’t know there was anything to do in the winter!) This one had a laminated sign reminding readers to wash their hands after using it, since the handle isn’t sanitized. Obviously, this is a LFL that is still maintained, and the gaps on the shelves make it look like people are still borrowing books here—not just dropping off unwanted ones. I added one of the books I had brought and headed off to my last two locations.

I love that this one has a dedicated kids’ book shelf! The rhyming border and transparent door make it very inviting. My dogs were getting impatient, though, so I wasn’t able to spend long perusing the selection.

I had planned on finishing my tour with the local LFL I’m most familiar with. It’s near my bus stop, and I often swing by to poke through the shelves. In the years I’ve lived nearby, I’ve seen it redesigned several times, so I know the owners pay attention to it. (Plus, I can see their giant bookshelves through the window, so I know they’re big readers…I’m not trying to creep! They’re right there!) Unfortunately, this time it was covered up. I’m not sure if it’s a temporary replacement for the door, or if they’ve stopped using it due to COVID, so I left it alone and had to head home with the remaining books I had planned to drop off. (Including a kids’ book with sparkly stickers included! It would have been a hit!)

What Did I Learn?

I didn’t have any big surprises in this Little Free Library walking tour; it confirmed my general feelings about the LFLs near me. Many of them seem run-down, like they were made years ago and haven’t been maintained since. The selection is varied, but is mostly the kind of worn-out outdated bestsellers that would be rejected at the local used bookstore.

On the other hand, I loved seeing the creative designs, and some of them really surprised me. A few were lovingly maintained, and I was glad that some had a good kids’ book selection. None of them were empty: it looks like there’s very little risk of someone cleaning out your little free library where I live, and much more chance that a neighbour will jam it full of books that are more suited for the recycling bin.

The best part, though, was the excuse to explore my neighbourhood in a new way. I walked down streets I never have before, and I got to see houses decked out for Christmas (including a house that had several trees outside festooned with dozens of decorative golf ball ornaments!) The pups were very excited to discover all the new smells that they haven’t had access to before. My walk was twice as long as it would have been if it weren’t for this little project.

In fact, I enjoyed this so much (despite not finding a book I wanted to read) that I want to try it again in a different neighbourhood! I’d like to explore some of the other 350+ LFLs in town and see how they differ by area—why not swing by the fancy side of town and see if they have a shinier selection? My partner and I plan to continue this walking tour in different areas. Maybe one day, we’ll visit all 398!

What is the little free library situation like where you live? Are there many around? Are they well-maintained? I’ve love to compare notes! Feel free to reach out on social media. If you haven’t already, I highly recommend conducting your own LFL walking tour—and if you don’t have a map to go off of, why not make your own?