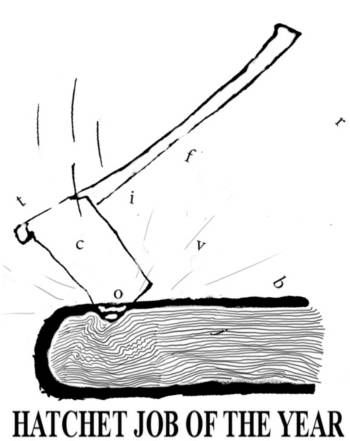 “That’s not an epiphany, that’s a postcard.” And with that sweet sign-off, last week novelist and critic Adam Mars-Jones won the inaugural Hatchet Job of the Year. His demolition in The Observer of Michael Cunningham’s By Nightfall secured him the most unnecessary literary prize ever invented. Hurrah for Adam!

Hatchet Job of the Year sounds oh, so noble. According to its website, it “is a crusade against dullness, deference and lazy thinking. It rewards critics who have the courage to overturn received opinion, and who do so with style. Most of all, it is a public celebration of that most underpaid and undervalued form of journalism: the book review.”

Bollocks. On many levels.

Let’s get one thing straight. Book reviewers need no encouragement to tear their contemporaries apart. To think otherwise would be to imagine a great white shark swithering over whether or not to gobble up a wounded seal. When both beasts smell blood, they go for the kill. This view of reviewers as too nice, too craven, too timid, and too boring is a cartoon. It is a poor excuse for the brooding nastiness at the award’s heart.

Secondly, the idea that for a book review to be entertaining it must be cruel and figuratively fell a reputation is at best immature, at worst toxic. The award believes that readers of the book reviews pages want blood. And so, like some grotesque Roman emperor, Hatchet Job of the Year has given them a gladiatorial arena for critics to really let loose. And in this place, the thumbs are always pointed down. Of course there is a place for exposing a terrible book’s sins, and these can certainly be great pieces of writing in of themselves. But this award just encourages reviews based upon testosterone, not nuance, good humour, generosity of spirit (which is much different from deference) and intellect.

And while I’m at it, the award won’t reward ‘critics’ in the widest possible sense. Take a look at its first short list. They are all middle-aged (apart from 26-year-old Leo Robson)  members of the London literary scene. By codifying that fiefdom’s internal queen bee bitchiness, this award is its last squawk against irrelevancy, the next generation, and the terrifying hinterlands beyond Bloomsbury.

I do agree, however, that book reviews are terribly undervalued. The books pages are a glimpse of a publication’s soul – its interests, prejudices, contacts, and how highly it values the written word are all bared there. But by making it a dumping ground for critics’ toxins, the award will transform a publication’s soul into its intestine.