Spring has sprung and with it, the new anime season has arrived. Thankfully, we now live in an era where simulcasts are the norm, which means we can enjoy a new show in English an hour after it broadcasts in Japan. Legally, even.

One of the big series airing this season is JoJo’s Bizarre Adventure: Diamond Is Unbreakable. Despite being relatively obscure in mainstream English-language manga and anime fandom until recent years, Hirohiko Araki’s JoJo’s Bizarre Adventure (JJBA) is a pretty influential series. Lots of titles—from manga Hellsing to videogame Street Fighter to U.S. TV show Heroes—reference JJBA, so chances are you might have absorbed some JJBA-related pop culture without even realizing it.

But here’s the thing about JJBA. It began serialization in Weekly Shonen Jump in 1986 and is still being serialized today, making it the second-longest manga series put out by manga publisher Shueisha. Short, it is not.

Don’t despair, however! While JJBA currently totals 115 volumes, it’s not as intimidating as you’d think. JJBA chronicles the, dare I say, bizarre adventures of the Joestar clan, with each part focusing on a different family member. Despite what hardcore fans may tell you, it’s not actually necessary to read them all. To that end, I thought it’d be helpful to provide a breakdown of the various parts for new (and old) manga readers. For each one, I highlight the protagonist, whether it’s available in English, and offer up a tagline that encapsulates the story arc. 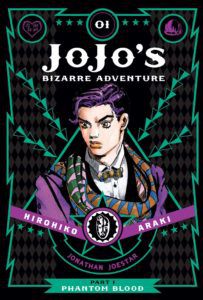 Set in 19th century England, Phantom Blood revolves around Jonathan Joestar and his adopted brother, Dio Brando. The scheming Dio wants to steal Jonathan’s noble inheritance, but his efforts ultimately meet with failure, so he resorts to becoming a vampire and decides to take over the world instead. As you do. 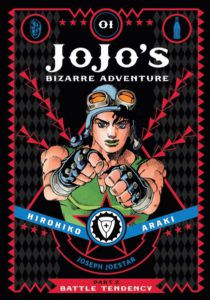 We move across the Atlantic Ocean to 1930s New York City and follow Jonathan’s rebellious punk grandson, Joseph. Through a series of seemingly random events, Joseph embarks on a quest to stop the Pillar Men, the supernatural race who created the stone mask that made Dio into a vampire, from taking over the world. Must come hand in hand with being a bloodsucker. 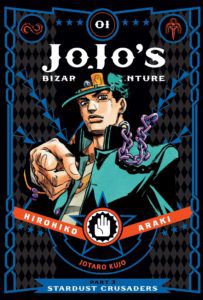 Now we jump forward a few decades to the 1980s and relocate to Japan. Stardust Crusaders features Joseph’s grandson, Jotaro. Remember Dio from Phantom Blood? Well, he’s still around and causing issues for the Joestar family, so it’s up to Jotaro and friends to stop him once and for all. 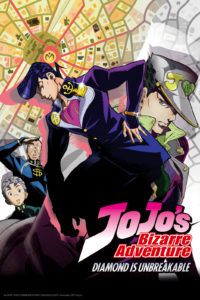 Araki intended to end JJBA after Stardust Crusaders, but Part 3 was so popular that Weekly Shonen Jump insisted he continue the series. So he conjured up an illegitimate son of Joseph’s, which brings us to a small Japanese town in the late 1990s. Jotaro comes looking for that illegitimate son, Josuke, but ends up staying to help his uncle(!) deal with some very strange occurrences.

Vento Aureo begins only a couple years after Part 4, taking us to Italy to follow Giorno, the son of series antagonist, Dio. Now, I know what you’re thinking. We’re following the son of the bad guy? I thought this series was about the Joestar family! [spoiler alert, or read Phantom Blood if you don’t want it spoiled]

Well, technically, Giorno is a Joestar. If you must know how, read Phantom Blood although the reason is referenced in other parts as well.

We return to the United States, this time to Florida in the early 2010s. Stone Ocean features the first, and thus far only, female Joestar protagonist, Jolyne. Framed for murder, Jolyne gets thrown into prison but when her estranged father, Jotaro, comes to visit her, his powers get stolen. Despite their bad relationship, Jolyne sets out to save her father and get his powers back.

This is a bit complicated but just go with it: JJBA Part 7 and beyond take place in an alternate universe. There is an actual canonical reason for this, but that’s a spoiler for Part 6. Sorry! In the late 19th century U.S., paraplegic horse jockey Johnny teams up with Gyro Zeppeli on a cross-country horse race, hoping to uncover a cure that’ll restore his ability to walk. Instead, they discover the horse race is a ploy set up by the President of the United States for his own nefarious reasons.

I know what you’re thinking. The protagonist’s name looks awfully familiar. So is Part 8’s Josuke the AU version of Part 4’s Josuke? Sort of. Maybe. Jojolion is still being serialized, but here’s what we do know. Part 8 takes place in the same small town featured in Part 4 and is set after the devastating 2011 earthquake that rocked Japan. This Josuke has lost all of his memories, but he has to regain them if he wants to lift an old family curse.

See? It’s pretty manageable. Here are a few other things you need to know about the series:

I know it’s frustrating to learn that the later parts aren’t available in English yet. Your best bet is to 1) watch Diamond Is Unbreakable so more JJBA parts get adapted and 2) support VIZ Media’s English-language release to demonstrate that there’s an audience for the rest of the series.

Are you already a fan of JJBA and take exception to my facetious taglines? Or do you have more questions about the manga? You know what to do.