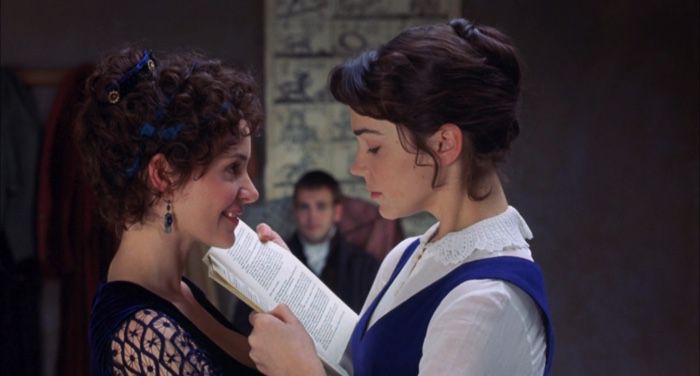 While Jane Austen is mostly known for writing beautiful, thoughtful romances, Austen’s authorship is also marked by wit, a critique of British society in the 18th century, and of course, her expressive arguments against the patriarchy.

For what do we live, but to make sport for our neighbors, and laugh at them in our turn?

Her earliest work to be written was Northanger Abbey, although it remained unpublished until after Austen’s premature death. Northanger Abbey features young and naïve Catherine Morland as the protagonist, who is on the cusp of adulthood and newly navigating society in the town of Bath. Half the novel focuses on Catherine’s friendships, slights, and romantic interests as Austen mockingly describes the false sincerity of some characters and lays faith in the simplicity of true friendship. The love interest of the book, Henry Tilney, is as unconventional as the plain heroine: he spends his time discussing silks with Catherine’s guardian and otherwise pretending, in jest, to have no opinion on the abilities of women. The novelty of the relationship between Catherine and Henry lies in the fact that Catherine, having liked Henry first, had most of the agency in their pairing as it was her feelings that first caught his attention. The second half of the novel forms a humorous critique of gothic novels that communicates the unrealistic portrait of English society that gothic novels create (at least in Austen’s opinion).

Persuasion features Anne Elliot, a protagonist past her marriageable prime. While she doesn’t propose to her love interest, in the tradition of Northanger Abbey, it is her confession of feelings that prompts her suitor’s offer in marriage. Once again, the heroine bears most of the agency in the relationship. Anne’s late marriage also speaks out against gender norms in British society at a time when most women past 22 were considered “old” and were unlikely to be wed.

Her best-known work, Pride and Prejudice, is rightfully famous for the creation of Mr. Darcy, who captured more than Elizabeth Bennet’s heart. What is radical about the story isn’t the rich and handsome heir to Pemberley, but rather that Elizabeth risks a fortune—not once, but twice!— in order to marry for love. In a time when women depended almost entirely on men and their marriages to men, Elizabeth risked financial security for love. The book also pays homage to the strong sisterhood between Elizabeth and Jane, and a warm sense of family that has carried the story not only all over England at the time, but across cultures today.

Emma, in contrast to Pride and Prejudice, focuses on a heroine who is financially independent and to whom marriage is very much a choice and not a financial necessity, a rarity in Austen’s time. The heroine of Mansfield Park depends on her relatives financially, while Sense and Sensibility is a critique against sentimentality.

All praises aside, Austen is not free from fault.
Postcolonial scholars have criticized Austen for her ignorance of slavery, or
her comparison between the social situation of women in 18th century
Britain and slaves. The 1999 adaptation of Mansfield Park was a response
to this critique and argued that Austen was both educated about British slavery
and wove it into her narrative.

While Austen’s writing and audience are both limited, there remains something timeless in her stories, which have been adapted again and again. Multiple retellings of her novels have taken different spins, including a more diverse set of characters than Austen’s originals. For my part, although Jane Austen’s works are far from representative, I cannot but admire the woman who penned the words, “I am half-agony, half-hope,” and revisit her stories—both the originals and the host of fantastic retellings—again and again.