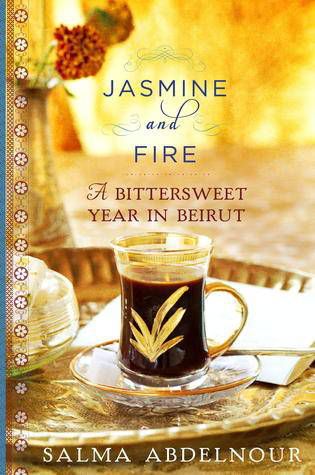 Salma Abdelnour published her first book, Jasmine and Fire: A Bittersweet Year in Beirut, this month. The memoir charts her return to Lebanon, decades after fleeing the country during its civil war in the 1980s, and her efforts to define and experience a sense of home. Abdelnour is a writer and editor based in New York. She was previously the travel editor of Food & Wine and the restaurant editor of Time Out New York.  We caught up with her before she starts her West Coast book tour in late June.

JENNIFER PAULL: In your memoir, you talk about the two common media narratives about Beirut. Did you go into this project thinking that there were other narratives that weren’t yet represented—other specific stories you wanted to tell, a hole you wanted to fill?

SALMA ABDELNOUR: That awareness developed while I was there. In past years when I was living in New York, paying attention to any article I could find about Beirut, I was starting to notice that [media coverage] was always one of two things. It was always either “Lebanon’s on the verge of collapse again” or “Beirut has great nightlife!” But the genesis of the book was not a reaction to that.

For me, it came from a very personal need to try to resolve this question that had been running for all the years since [my family] left Lebanon. At the time, my parents very much believed that we’d be away from Beirut for one year, and the war would be over by then. And of course, it took another nine years for the war to end. That, somehow, got that question started at a very young age: When am I going to back? Many years later, I got to my late thirties and that question was still there; it wouldn’t go away. Much as I love my life in the States, I love my life in New York, that question never shut down. For me, Beirut was still home—or was it still home? I needed to go back and re-engage with it in a way that would answer that question.

But while I was there and delving into day-to-day life there, the more I felt this growing impatience with the fact that outside of Lebanon, the narratives about the country are always those two things. The more I was trying to answer my own question, the more I felt that I wanted to present to people who don’t know Lebanon at all a picture that’s more layered.

Of course, to some degrees, those two things are also true. There is a sense of constant potential for political conflict, and there is an obsession with socializing and going out. So those things aren’t exactly false, but they’re also limiting. It’s a much richer, more complicated culture. I became conscious of wanting to show that. I wanted to show a day in the life in Beirut, and a day in the life in the towns elsewhere in Lebanon.

JP: At the time that you prepared for your year abroad, and for writing this book, had you studied or read many memoirs? Were you especially familiar with the genre, or was this a relatively new arena for you?

SA: I didn’t go into it thinking of the book as a memoir. When people asked about it, I’d say, “it’s a life experiment.” It’s a chronicle of a life experiment. I was hesitant to use the word “memoir.” I don’t think that in my late thirties, it’s time to write a memoir! It was more of a moment of: This is something I need to do, to come to some sort of resolution about whether I could live there again, can you still go home again?

I also hoped that other people in that situation could live through [the book]. Talking with so many people—and not just Lebanese, people who left whatever country for whatever reason—it’s a question of “I want to go back, I can’t go back, I can’t live without it.” This kind of constant struggle. I hoped my book would speak to that and be a vicarious adventure. But in the end, memoir is the shelf this book fits on most comfortably.

JP: Did you read other memoirs that reflected a similar experience?

SA: I did, but I also didn’t focus too much on memoirs about a search for home, because I thought I would see something and think, “oh, it’s been done, what’s the point of me doing it!” And then I’d have to be talked off that ledge. But the search for home is a universal theme.

I read My Life in France by Julia Child, a more episodic memoir, bits and pieces of her life with her husband Paul Child . . . I loved the warmth and immediacy of her voice. I was trying to see how people approach the question of getting personal. So I read Lipstick Jihad, which in some ways has parallels to Jasmine and Fire in that the author grew up in an Iranian family, but in the States, and she didn’t have a clear sense of life in Iran. It’s a wonderful book; it really gets into the nitty-gritty of daily life in Iran, the political life there. It’s a very smart take—but it doesn’t get too personal, I found. It doesn’t get too into what it really feels like to pick up and overturn your life in this way. But she does struggle with the issue of home, in a different direction.

JP: You mention the political approach of Lipstick Jihad—I notice in your book that you often introduce a political topic (and your response to it) with a personal or cultural story. For instance, the story of your cousin Mona’s marriage to a Tiawanese-American. Since secular weddings aren’t legal in Lebanon, her fiancé converts to Islam, and you use that personal experience to springboard to a discussion of sectarian politics and how they affect daily life. How did you balance politics with personal experience?

SA: Obviously there’s the cliché that the personal is political, but that’s particularly true in Lebanon. Every day you come up against a political valence to daily life. For instance, I’m attending my cousin’s wedding, but they can’t get married in Lebanon unless he converts. Or something more overtly political, like protesting the sectarian government in Lebanon.

But I wanted to keep it to personal experiences rather than getting on a soapbox about politics in the region. Which was a temptation! In the first draft I did actually go more into that, but my editor smartly reminded me that it’s not primarily a political book and it was a bit out of balance with the rest of the manuscript, so we cut. But I think it made more sense to talk about the natural ways in which certain political issues come up in day-to-day life, the cultural expectations.

JP: So the cutting-room floor . . . Any bits you wish you could have kept in but they didn’t fit the page count?

SA: Many, many! A couple more pages laying out the political context, sure, but it would have been out of balance.

For instance, in Amsheet, a town just up the coast from Beirut—there’s a walk I took up to the top of the hill where there are these beautiful old houses that the wealthy silk merchants built. The main attraction of the town is a house where the French author, Ernest Renan, lived in the nineteenth century. There’s a family living there now but it’s a landmark, “ooh, Renan lived here . . . ” He’s in many quarters a revered thinker, but then Edward Saïd, in Orientalism, gives him a heavy drubbing.

And another town was Hammana, in the mountains east of Beirut, a town of cherry orchards. In June they have a festival and I went and ate incredible cherries. Lamartine, the French poet, said something about how the view from Hammana was the best he’d ever seen. Lamartine lived in a house there and now you can visit the house. It’s gorgeous and again, a family now lives there. I went there and the house is off the main souk. I was poking around with a few other tourists and I walked into the house because the door was wide open. It’s very traditional, this aspect of Lebanon, the hospitality, “come on in!”

I went in thinking it was a museum but then I see this woman and thought she was a tour guide. But she’s the lady of the house! I’d entered someone’s home. But she graciously offered coffee and chatted. Someone asked how long Lamartine had been in the house and she said, “two weeks.” I thought, “that’s it, two weeks?!” But it’s the Lamartine town. I poke fun a bit at the Lebanese tendency to revere the French. These writers bestowed on their towns a certain prestige that seemed a bit out of proportion.

How far can you push that hospitality? It’s extreme, it’s considered shameful not to offer your food, your furniture, your clothes, your children . . . see how far you can go before someone cuts you off! It would be a great subject for a play.

JP: You’re about to start traveling on your book tour. What will you read on the road?

SA: I put down Cloud Atlas most of the way through, although I’d been enjoying it tremendously (because I have spastic reading habits sometimes), but have now resumed the Mitchell. Up next: Zeitoun by Dave Eggers (already started it), and Roth’s American Pastoral (finally).

JP: When you booked your flight to go back to Beirut later this summer, did it feel as though you were planning a trip home, one of your homes?

SA: Very much so. When I first arrived in my family’s apartment in Beirut at the beginning of that year, the space felt distant. It felt like something from long ago—I lacked intimacy with the space around me. It felt foreign all over again. And of course that got tamed as the days and weeks went by, and I reclaimed that space as my own. Now I can’t wait to sleep in my bedroom there! I can’t wait for that electrical outage and getting stuck in an elevator . . . but no, really, I can’t wait to get back there. I very much see it as one of my homes now.