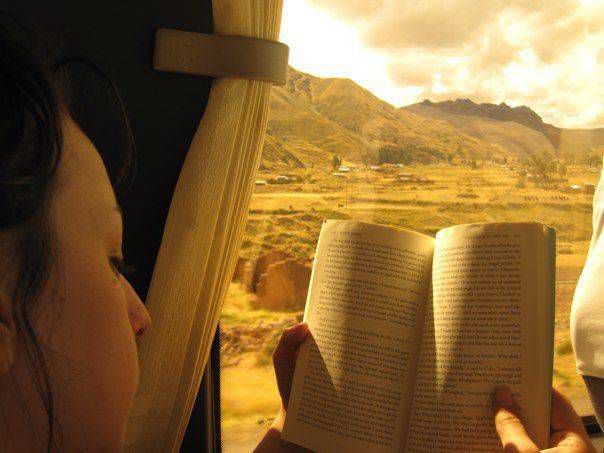 Reading, as all of us Book Rioters know, is an adventure of the mind. Side effects may include tired eyes, the occasional paper cut, staying up past one’s bedtime, and being five minutes late because (said in little-girl-possessed-by-Satan-Voice) YOU JUST HAD TO FINISH THAT LAST CHAPTER.

Travel, as all unshowered backpackers and fanny-pack-championing retirees know, is an adventure of… well, the rest of you. Side effects may include mosquito bites, piranha bites, rabid monkey bites, parasite worms that crawl down your legs and into your eyeballs, being trapped on a sinking lifeboat with a dozen shark fins slowly circling the deflating rubber, being held at gunpoint in a dark alleyway, being lost in the jungle forever, all four hepatitises, the plague, and so, so, so, much Traveler’s Diarrhea.

Traveling and reading do not go together like rama lama lama ka dinga da dinga dong, but if you are a hardcore reader who is in the middle of hardcore traveling you  have little choice but to wrestle, tackle, elbow-jab, face-punch, and groin kick these two wascally wabbits and MAKE them go together.

In the past five-ish years, I have made reading and traveling go together across four continents.

This how they went together in South America.

If you f— up your plane books, you’ve just saddled yourself with four pounds of dead weight. Way to go, you. That could have been a first aid kit or a huge bottle of water or something useful.

I did not f— up my plane books. Well, not this time around.

On my flight to Lima, Peru I brought two books: The Dud Avocado by Elaine Dundy, because it was a skinny novel that came highly recommended and Don’t Sleep There Are Snakes by Daniel L. Everett because it was a skinny work of non-fiction, came highly recommended, and actually takes place in South America, specifically in the Brazilian Amazon among the Pirahã tribe. Skinny and highly recommended are great for plane rides. Unfortunately they are the worst for spending a month in a strange land where your favorite local bookstore isn’t three blocks away.

The bookstores I visited in Peru and Ecuador were top-notch. They were small and well-stocked with the  nicest older gentlemen manning the front counter. Think that scene in Beauty and the Beast where Belle goes to the bookshop to borrow the book she’s read twice already, but make everything South American.

My adventure friend/boyfriend, near-fluent in Spanish, picked up Borges and Garcia Marquez in their original languages. I was relegated to the English sections. In Lima I bought Marching Powder by Thomas McFadden, a memoir detailing a British drug dealer’s five years inside a Bolivian prison. In Quito I purchased No Impact Man by Colin Beavan, a memoir that follows a Brooklyn writer, his wife and small child, and their year off the grid.

The English books were imported, and being imported, when rung up, came out to the cost of a small English manor. I didn’t have the money for three to seven more small English manors. So I started eyeing my travel-adventure companion-friend (re: boyfriend I was backpacking with) and his short stack of libros español…

Discovered that most bookstores and hostels had a used book black market trade going down on the back shelves. Bring in two used books, get one used book back. The selection on the used book shelves is manna in the wilderness if you’re into romance novels and commercial thriller-mysteries. Otherwise, it’s pretty much just wilderness. Among these slim pickings I found/read Garrison Keillor’s Lake Woebegone Days, Robert Louis Stevenson’s Treasure Island and a biography of Vladmir Putin. And I had to go through about a dozen bookstores and hostel lobbies to find even those. Think of it as Arguably the Nerdiest Scavenger Hunt There Ever Was.

Ran out of books in the middle of the Ecuadorian Amazon. All there was to read in the splintering-and-a-little-bit-rotting Swiss Family Robinson-wannabe treehouse we stayed in were old National Geographics in English, French, and German. So I used every last memorized word of my junior high school French and my basically non-existent German as I read in my hammock by flashlight. A large family of  mosquitoes feasted on my face as biblical rain poured down on the impossibly green jungle and a thousand monkeys screamed into the night.

The Amazon Kindle hit the market in 2007. The Barnes and Noble Nook followed at the end of 2009, and the Apple iPad right after that in the first month of 2010. I was in South America in 2010, when all these products existed, but before they hit their tipping point and became that-thing-that-everyone-who-lives-in-a-first-world-country-owns-like-a-microwave-and-a-laptop. I could have technically taken an e-reader when I vamos-ed to Sud America. There were electrical outlets, I had an adaptor. It was possible. I could have had all the books I wanted in e-ink at my fingertips. But I didn’t. And for this trip, I’m glad I didn’t. Reading in South America wasn’t just an adventure of the mind. It was an adventure of everything else too. And it’s not often that reading, a habit accessorized by horn-rimmed glasses and slightly worn couches, gets to be an adventure of everything else too. It’s a little bit more pulling-fistfuls-of-hair-out-of-your-head exasperating and it’s a little bit more worthy-of-Facebook-photos-and-emails-back-home-and-memories-years-after-the-fact. I love when reading is easy. But as it turns out, I kind of like it when it’s crazy-making too.