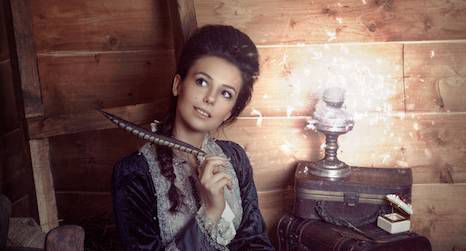 Before thinkpieces, there were pamphlets. Glorious pamphlets that you could have printed up and distributed about the town, so everyone would know what you thought about the monarch’s latest decision (and, if you were like John Stubbs, you got your hand cut off for it).

Unsurprisingly, many pamphlets of the past concerned religion. Most were written by men. But one written in 1617 so outraged a woman named Rachel Speght that she fired off a response, entitled “an Apologeticall Answere to that Irreligious and Illiterate pamphlet made by Io. Sw. and by him Intituled, The Arraignment of Women.”

The full title of Joseph Swetnam’s pamphlet was, in fact, “The Arraignment of Lewde, Idle, Froward, and Unconstant Women.” So. You understand her outrage.

Rachel Speght’s reply begins by annihilating the author’s character, and then proceeds to a well-reasoned argument, citing Scripture. The two halves are pretty night and day, but the first half is more fun, so let’s look at the best quotes from it (17th c. spelling retained for fun-ness purposes). First, speaking of Swetnam’s pamphlet:

THE SCUMME OF HEATHENISH BRAINS. I wish without hope that I could see what this woman could do with a writing position at Jezebel.

When she is speaking of some words of Seneca’s:

I’m kind of proud of her for going right for the ‘monster’ comment. I feel like people nowadays hold back from that, at the risk of being called too hyperbolic or being accused of ad hominem attacks. But Rachel Speght doesn’t care. Rachel Speght says what she wants.

She continues the first section with a poem, the best part of which is:

Yaaaaas. That poem in its entirety, by the way, is an acrostic of the original author’s name. This is the “Swet” part of Swetnam. So she made an acrostic of his name talking about how terrible he is. Such shade. Much joy.

We hear so little from women of this time period, and to have one not just writing but saying “HOLD ON A SEC, BRO” to one of the many, many idiots writing unchecked about women at the time, it makes me want to cross-stitch a congratulations banner and send it back in time.

The first section ends with a letter to the original author. The title includes “the veriest Ideot that Euer set Pen to Paper.” I’m just imagining this woman in 1617 reading this man’s piece and going “oh HELL no” and grabbing some paper and scribbling furiously. “To the veriest Ideot–” she would start, and then her dad would lean over and say “Rachel, do you think maybe that’s a tad strong?” And she’d say “I KNOW WHAT I’M DOING, DAD.”

My favorite line in the entire piece is maybe “But the emptiest Barrell makes the lowdest sound; and so we will account of you.”

She also talks about his “virulent foame,” “corrupt Heart and railing To[n]gue,” and “hodge-podge of heathenish Sentences, Similies, and Examples.”

You can’t at the very least help wanting to have a conversation with someone who says “hodge-podge of heathenish Sentences,” I mean, come on. The fact that she follows all this up with some slamming biblical reasoning makes this virulent rant at the beginning all the better. Like she vents all her rage and then goes “ahem” and moves into professor mode.

You can’t do better than end with her closing words to him:

You can read the whole text here. Enjoy.