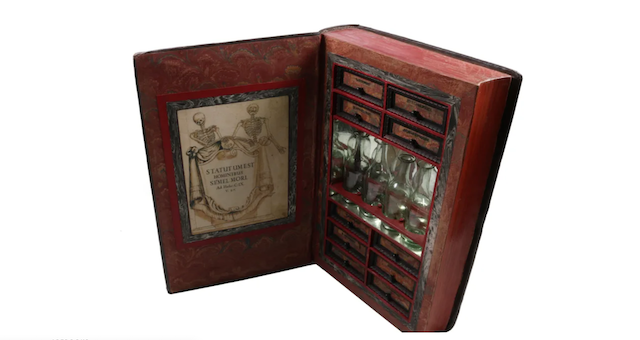 “The secret storage box masquerading as a manuscript was likely assembled sometime in the 19th century, Atlas Obscura reports. It uses the leather binding of Sebastião Barradas’s Opera omnia, vol. III—a theology text from the mid-17th century—as its shell. Two hundred years or so after the original book was published, someone pasted together the pages and hollowed them out to make room for a discreet apothecary lab. A shelf holds four glass bottles measuring 10 centimeters high. Tiny drawers are labeled with the names of poisonous plants—such as hemlock, foxglove, and Devil’s snare—in German, suggesting the book safe was crafted in Germany. On the inside of the front cover, a memento mori illustration depicts two skeletons above the Latin Bible quote “Statutum est hominibus semel mori,” which means, “All men are destined to die once.””

Putting this secret poison compartment book on my birthday list this year.

I’m so ready for this!

“German authorities are handing over to Israel a trove of 5,000 documents kept by a confidant of Franz Kafka.”

This whole Kafka paper ownership story is a ride.