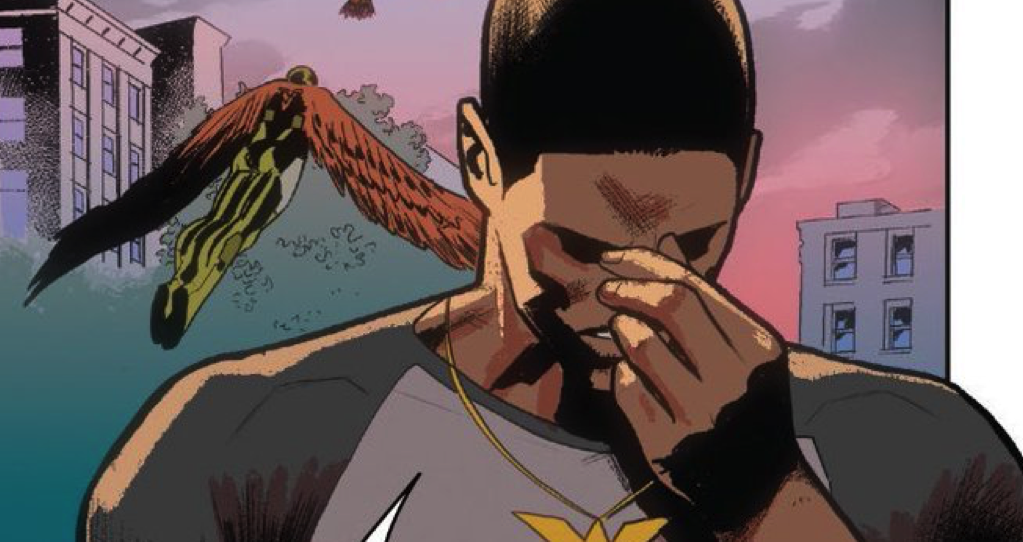 When a twist in the current Captain America storyline revealed that Cap was Hydra—essentially a Nazi—and had been all along, there were many fans that were understandably upset. The writer of Captain America (who I won’t name in this piece because I don’t want to give him more publicity at this point) didn’t handle the criticism all that well, arguing heatedly and asking us all to wait and see how the storyline turned out. This was laughable, considering the comics industry begs journalists to cover issue by issue (and therefore boost single-issue sales), rather than waiting for the entire storyline to unfold. They specifically want us to cover a story arc before we see it play out fully—unless, of course, we don’t like what we see. (Let’s also remember that it didn’t really matter what the full storyline was—when you make Captain America, a character created by two Jewish men to fight Nazis, a Nazi, you’ve crossed a line.)

Fast forward to a few weeks ago. The writer in question, who also writes Sam Wilson’s Falcon series, put some questionable panels that seem to be aimed at his critics in a recent issue. (These are the villains pictured in the panel below.) 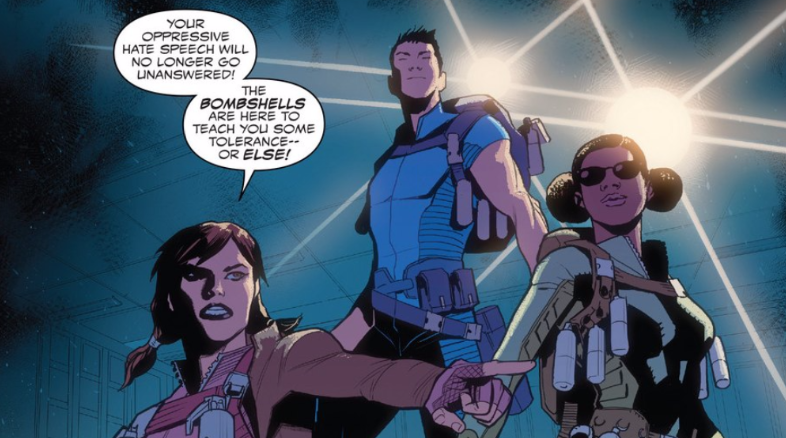 By questionable, I mean petty and offensive (though the writer claims it’s “satire”).

He, as a white writer, also put these words in the mouth of a black man. 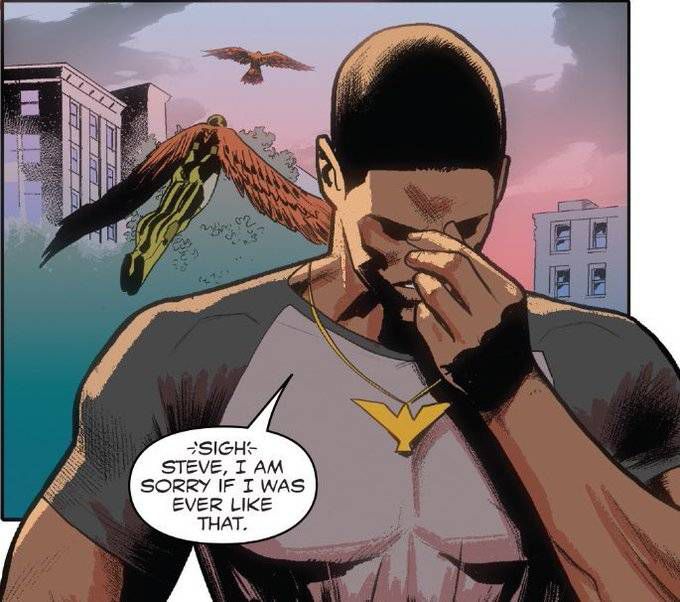 It was pretty bad. I try to think the best of people, and be as generous in my interpretations as possible, but even I was just flabbergasted.

If you have a lot of Twitter followers, you’re conscious of what that comes with: responsibility to use the service wisely—with great power comes great responsibility, after all. I don’t have anywhere close to as many as the writer in question, but I have more than a few, and I’m careful with what I say. Partially because anything I do has a greater potential to bring abuse upon myself, but also because it has the ability to bring abuse upon others. If you quote RT someone who disagrees with you, even if they’re doing it politely and professionally, as a critic, it encourages your followers to pile on, and you have no control over how they act in your name.

What the writer did to his critics after that episode is really inexcusable: he started quote-RTing critics, blasting these tweets to all his followers. And what’s more, he did it with tweets that weren’t even tagging him (Don’t name search on Twitter. It will never end well.) And he did it to one of my Book Riot Comics writers. It wasn’t good form. It was nasty and petty. It screamed of a desire for attention, rather than good dialogue.

Fast forward again to this weekend. It seems as though this writer spent hours during the election weekend arguing with followers on why it’s a bad idea to punch Nazis in the face (after the video of Richard Spencer getting punched in the face went viral).

Now, I’m a supporter of nonviolence. I think turning to violence often undermines the point you’re trying to make, though I understand and support the need for civil disobedience to effect change. But COME ON.

The guy who wrote Captain America as a Nazi, who threw the equivalent of a tantrum at all his critics in the pages of a comic he was writing, then spends hours on Twitter fighting with people on why they shouldn’t punch Nazis? Is that really the message he wants to be sending?

Look, I don’t think the writer in question is a Nazi sympathizer, or anything close. He is just a really privileged dude who doesn’t understand something that every woman, every person of color, every out LGBTQ+ person, every marginalized voice who decides to have an opinion on the Internet does: You have to choose your words, and your battles, carefully.

It’s okay to believe that you shouldn’t punch Nazis. It’s okay to think that we should all be above that. I personally don’t have a problem with punching Nazis in the face, and I think it’s easy to be high and mighty when you’re not facing an actual threat, as many people are when faced with Nazism (Let’s remember that Nazis aren’t some mythical threat—there are actual Nazis out there. They have committed horrible acts in the past, and they would commit horrible acts again if we didn’t stop them. That’s a whole different discussion that’s worth having—why wouldn’t you meet that threat by punching a person in the face? But that’s not for this post.) This isn’t a pile-on, demonizing someone for thinking it’s generally a bad idea to punch people in the face, even if they believe awful things. But this writer made his career breaking one of the fundamental rules of Captain America. Is he really the person to be pontificating on how we break the rules when it comes to dealing with an actual human Nazi?

This is not about what we can and can’t do. It’s about having good judgment and thinking about things we say before we say them. It’s about the idea that maybe you should have a filter and not say every single thing that pops into your head. It’s about recognizing that with great power comes great responsibility.

Look, I’ll be honest: I hate having to consider how things will look. I hate knowing that I mean well, but something will come across badly, so I probably shouldn’t say it. I hate having to think for 15 minutes about how to word a tweet because I know it’s important I speak up, but it’s a delicate subject and needs the right wording. And I hate that, as I’m typing all this, I hate that I’m already anticipating the abuse that’s going to come with this piece. But because words have power, and I understand that the way things come across is as important as my meaning (if not more—only I know my meaning, but every single other person only sees my words), I do.

In the end, it’s about privilege. Because this writer is a white male comics writer for a major publisher, and has all the Twitter followers to go with that, he hasn’t had to think about these issues. He can write his personal narrative as, “Look at all these people coming after me because I’m being so sensible as to say punching anyone in the face is bad,” when really it’s not about that at all.

It’s about understanding that events are connected, and he has lost all benefit of the doubt from so many of us. That when you make Captain America a Nazi, lash out like a child at every critic that comes your way, and then decide it’s worth your time to spend hours vehemently arguing that people shouldn’t punch Nazis, IT IS NOT A GOOD LOOK. Is the issue of not punching Nazis really so important that it’s worth this much of your time and effort, considering how much bad blood you’ve already created? REALLY?

What you say matters. Context matters. And defending Nazis is never a side you want to be on, even if that’s only how it looks.

Let’s be better, comics. We can do better.