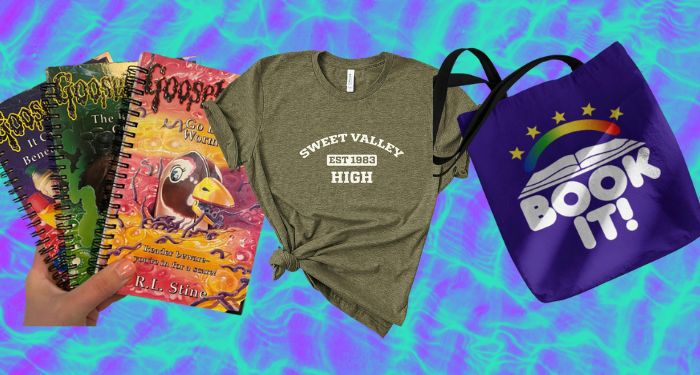 As a teenager of the ’90s, I look back on the decade with a lot of fondness. It’s the decade of Friends, “the Macarena,” and endless AOL CD-Roms for accessing this new thing called the Internet. D:ream’s 1993 song “Things Can Only Get Better” seemed to summarise the spirit of the age, and the UK’s New Labour used it as their anthem on taking over power in 1997. Things weren’t rosy for everyone, and some of that optimism proved sadly unfounded, but dipping back into some of the best parts of pop culture, and book culture specifically, can bring its own kind of joy.

Lots of notable books that have cemented themselves as modern classics were published in the ’90s, too: books like The English Patient by Michael Ondaatje, Tracy Chevalier’s Girl With a Pearl Earring, Bridget Jones’s Diary by Helen Fielding. Jazz and Paradise by Toni Morrison were published, and she won the Nobel Prize for Literature in 1993. My own reading was dominated by Caroline B. Cooney, and, of course, Judy Blume, and just invoking their names makes me want to reach for their books again.

If you have a nostalgic Gen Xer on your holiday list, these ’90s-inspired literary gifts are bound to be a hit.

The YA section in my local library wasn’t huge in the 1990s, but it did keep me supplied in Sweet Valley High novels. I love this T-shirt’s classy throwback to some of my earliest voracious reading days. $24+

Salman Rushdie’s The Satanic Verses was published at the tail end of the ’80s, and coverage of it and the fatwa issued against him was a recurring news item of the 1990s. This collector’s doll is $54.

Lest we forget, the term Generation X was popularised by Douglas Adams’ book of the same name, published in 1991, just in time to define a decade that many of us from that generation feel is our own. Grab these Generation X stickers for just $4.

The iconic Goosebumps book series launched in 1992 and these notebooks pack a nice retro punch. $7

Toni Morrison’s gorgeous novel Jazz was published in 1992 and this poster is a great tribute. $14

This T-shirt is a nod to The Secret History by Donna Tartt for all fans of the 1992 novel, from $29.

Jazz up your wardrobe with this T-shirt. It’ll make you smile as you remember the iconic series of middle grade novels, published beginning in the ’80s and through into the mid ’90s. $21

Before the movie, Bridget Jones featured in a series of columns in the UK’s The Guardian. The book was published in 1996 and captured the Zeitgeist brilliantly. This print features one of the film’s most iconic lines. From $5

This tote bag is a great gift for anyone who’s nostalgic about the days when you could earn pizza just by reading. $26

Beloved by bookworms everywhere, the 1999 film Notting Hill captures the romantic nature of bookshops. This print is a great nod to it.$9