This week’s Riot Recommendation is sponsored by To The Bright Edge of the World by Eowyn Ivey. 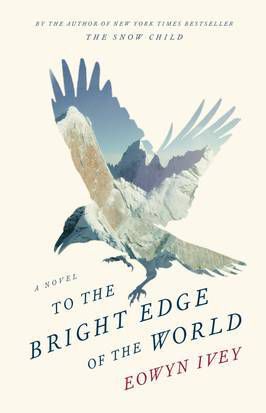 In the winter of 1885, decorated hero Colonel Allen Forrester leads a small band of men on an impossible expedition: to venture up the Wolverine River and pierce the vast Alaska Territory. Leaving behind Sophie, his newly pregnant wife, Colonel Forrester records his extraordinary experiences in hopes that his journal will reach her if he doesn’t return.

Meanwhile, on her own at Vancouver Barracks, Sophie chafes under the social restrictions and yearns to travel alongside her husband. She does not know that the winter will require as much of her as it does her husband, that both her courage and faith will be tested to the breaking point.

Historical fiction allows us to imagine a time period we’ll never experience (and for most of history: thank God), to roll around in the sights and smells and events of days gone by. Alternative history takes it a step farther, transporting us back in time and then imagining what might have been. So here are Riot Readers’ favorite works of historical fiction:

The Birthday Boys, Every Man For Himself, Young Adolf, Master Georgie, and According To Queenie, all by Beryl Bainbridge

The Miniaturist by Jessie Burton

Shadows on the Rock by Willa Cather

The Dust that Falls From Dreams by Louis de Bernieres

Rebels and Traitors, Master and God by Lindsey Davis

The General in His Labyrinth by Gabriel García Márquez

A Good American by Alex George

Memoirs of a Geisha by Arthur Golden

The Physician (part 1 of Cole series), Shaman (part 2) and The Last Jew (standalone) by Noah Gordon

I, Claudius, and Claudius The God, both by Robert Graves

At the Water’s Edge by Sarah Gruen

The Big Sky, The Way West, These thousand Hills, Fair Land Fair Land, all by A. B. Guthrie

The Nightingale by Kristen Hannah

Stones from the River by Ursula Hegi

A Murder for Her Majesty by Beth Hilgartner

The Book of Negroes by Lawrence Hill

The Woman Who Heard Color by Kelly Jones

The Far Pavilions by MM Kaye

The Witch of Cologne by Tobsha Learner

The Secrets of Mary Bowser by Lois Leveen

A Conspiracy of Paper by David Liss

Wolf Hall, Bring Up The Bodies, and A Place Of Greater Safety, all by Hilary Mantel

A Constellation of Vital Phenomena by Anthony Marra

Cloud of Sparrows by Takashi Matsuoka

Gone with the Wind by Margaret Mitchell

The Corn King and the Spring Queen by Naomi Mitchison

Daughter of Lir by Diana Norman

Harriet and Isabella by Patricia O’Brien

Instance of the Fingerpost Iain Pears

When Christ and His Saints Slept, and Falls the Shadow, both by Sharon Kay Penman

He Shall Thunder in the Sky by Elizabeth Peters

The King Must Die by Mary Renault

The Girl who Played Go by Shan Sa

Katherine and Avalon by Anya Seton

The Ptolemies by Duncan Sprott

The Very Rich Hours Of Count Von Stauffenberg, and The Women Of Whitechapel And Jack The Ripper, both by Paul West