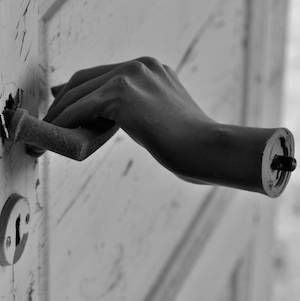 When Margaret Atwood, Our Blessed Lady of Canadian Letters, asks you to do a creepy thing this close to Halloween, you do the thing. And she asked us to do this thing:

WHAT ARE YOU WORKING ON THAT YOU NEED THAT LIST, MARGARET ATWOOD? is my immediate reaction, followed swiftly by curiosity: are there 10 examples of self-propelling body parts in literature? My fingers went hunting (ha!) and found nine well-known, widely-celebrated tales:

1. “The Moving Finger” by Stephen King, collected in Nightmares and Dreamscapes. A nightmarish short story about a man who finds a multi-jointed finger crawling up and out of his bathroom sink drain. The finger appears sentient, continues coming after he burns and cuts it, and is prone to violence (yes, the finger, the finger is prone to violence). You’re going to want to put this book in the freezer when you’re done with it.

2. “The Monkey’s Paw” by W.W. Jacobs. A classic Edwardian story about a family who is gifted an enchanted monkey’s paw from India, which has the power to grant wishes. As the family asks for their wishes, the fingers move down, indicating that the wish has been granted- but never in the way the family wants, and always to horrible effect.

3. “The Nose” by Nikolai Gogol. A bizarre (well, these are all bizarre) story about a Russian official whose nose leaves his face and cavorts about town pretending to be a human being, rising in the ranks of civil service and refusing to be reattached to its owner. As one does.

4. “Her Husband’s Hands” by Adam-Troy Castro. A woman’s husband comes home to her from war- except all that’s left of him are his two hands, equipped with light sensors and computerized bracelets that store all his memories, along with the life support to keep him- or “him”- alive.

5. Coraline by Neil Gaiman. A little girl discovers a door in her apartment that leads to another world- one ruled by her sinister Other Mother and Other Father, who offer her the attention and food and life she doesn’t have in the real world. Other Mother’s awful nature and true plans are eventually revealed and a Great Struggle Against Evil ensues, resulting in (SPOILER, SORT OF) Coraline having to capture Other Mother’s severed, living, moving-around-and-doing-nefarious-stuff hand.

6. The Breast by Philip Roth. In what must be the foremost example of male literary navel-gazing, a literature professor transforms into a 150-pound female breast, and then goes on about his business (with lots of whining). Yeeeepp.

7. Donovan’s Brain by Curt Siodmak. A 1942 cult classic of science fiction about a physician experimenting with methods for keeping brains alive. When a millionaire crashes his plane near the doctor’s house, the doctor is unable to save him, but is able to keep his brain alive- or, again, “alive”- in a tank. The brain then starts to control the doctor, leaving him with Fight Club-style bouts of amnesia. No good comes of it, as I’m SURE you guessed.

8. “The Tell-Tale Heart” by Edgar Allan Poe. The narrator kills an old man, cuts him up, and buries the pieces beneath the floorboards, only to be haunted by the ever-increasing sound of the old man’s buried heart beating. While it’s very possible, depending on your interpretation, that the sound is just the narrator’s own heartbeat beating in his ears, or a hallucination, I like to think the old man’s actual organ came back to life to take a bit of vengeance.

9. The Four Fingers of Death by Rick Moody. A novel about a novelization of a movie (?!) about a doomed manned mission to Mars. The only survivor of the mission is an animated arm of one of the crew members, who (that?) crash-lands in the desert of Arizona.

It’s worth pointing out (though I’m sure you noticed) that all of these examples are written by white men. These are all tales of science fiction and horror, genres historically dominated by the White Dude, so there’s that. Freud would probably have something to say about men-folk subconsciously being more concerned with the implications of body parts…detaching…and having fun adventures without them (psh, Freud, what do you know).

But please, if you know of any examples of bizarre stories about detached, animated/self-aware body parts written by women or people of color, leave them in the comments (is the strangest thing I’ve ever asked our readers).